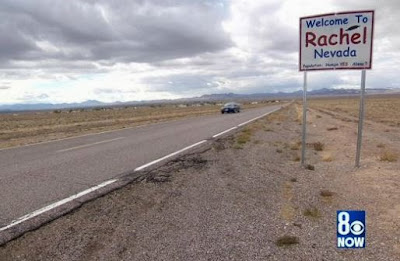 RACHEL, NEV. -- Residents of Rachel, Nevada -- the tiny town that became world famous because it sits on the doorstep of the Area 51 military base -- are on edge. Someone has been buying up property under their noses, and when they checked to find out who was behind it, they found ties to the white supremacy movement.

You have to be tough to live in a place like Rachel. It's not exactly known for its amenities. So, when the only gas station in town gets gobbled up, then shut down and when the only trailer park gets purchased, then wiped out, it's bound to attract attention. And when residents learned that the people who have been buying their town have ties to neo-Nazis and white supremacists, they were creeped out and anxious.

Rachel, Nevada is the number one attraction on the world's only extraterrestrial highway. That said, there's not a whole lot to it. The heart and soul of the town is the Little A'Le'Inn which has capitalized on its proximity to the world's most famous classified military base -- Area 51.

For 25 years, the owners have scratched out an existence by catering to UFO hunters and desert travelers. But these days, they're worried, all because of a mystery man who came to town.

"Who is this person and why are you keeping yourself so secret from this community, because he didn't actually show his face to anybody," said Connie West, proprietor of the Little A'Le'Inn.

"I was in shock. I didn't want to believe," said Pat Travis, co-co-owner of the Little A'Le'Inn. - Video and more at I-Team: Residents in Small Nevada Town on Edge 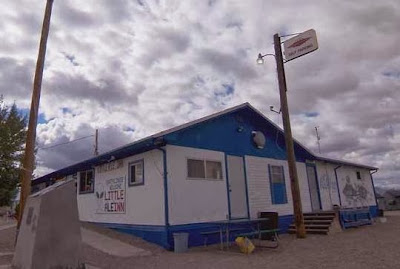 In Lauderdale County, no one knows what "Stuckey's" first name is but people know where to find his bridge over the Chunky River.

Now it's mostly used for a Halloween party spot but local legend holds it's also the site of Stuckey's lynching and haunting.

Wayne Smith said he lives (with his dog Joe) on the property Stuckey is said to have owned in the mid-1800's.

"Murdering people, disposing of their bodies, gold buried along the banks of the river," Smith said - shortly summing up the story.

"We have found through the years of talking to people that he was probably a serial killer," Smith said.

Legends tell that "Stuckey" operated an inn where he killed as many as 20 people who were waiting to ferry across the Chunky River.

After the bridge was built and his crimes discovered, locals held a Kangaroo Court and made an example of the former Dalton Gang member, according to local legend.

"They hung the man and his helper from the bridge. Left him and come back after three or four days to cut the bodies down. And they splashed into the water of the river," Smith said.

Some people say they can still here that splash nightly (although beavers are the suspected noise-producers). But it's the other sounds and sighting that are more disturbing.

"It's more mist-like with a silhouette of a human being or you'll see a mist with a face in it," Smith said.

"There have been people who have heard women screaming. And it normally occurs at night," Smith said.

Paranormal Investigation groups have shared what they call evidence of violent spirits online but some neighbors dismiss the videos as staged.

Then there is also the fact that the bridge was built after that story would have taken place. At that point, the legend starts to fall apart but the myth carries on.

"People come here and they see, well, we have had some sightings here. One as recent as this weekend," Smith said.

"You have to live here to see what we see and hear what we hear because when we first come here we were skeptical. There's something here that people are seeing and feeling and when we come to the bridge, We feel it," Smith said.

"I haven't seen anything but we feel it," Smith said.

Other neighbors tell NEWS CHANNEL 12 that they have actually met relatives of "Stuckey" who claim their ancestor was accused of murder after a dispute over a hog.

But, again, the evidence is lacking. - WJTV

On my birthday me my brother, and sister were chilling in the park at nighttime, the park is right next to my house. It was pouring like never before and the rarest kind of lightning was flashing all over the sky without hesitation. It's that spider lightening. http://www.weatherscapes.com/photo.php?cat=lightning&id=w-340-13 Like that, but all over the sky. It was so cool and we were all oohing, and awing, but then it got crazy. The jungle gym in the park was slightly visible with each flash of lightning, and we were right around that area when I was looking around the park. A flash of lightning made a scribbly black humanoid figure visible to me, and I was frozen with terror, because I felt it before I saw it. I could feel it there, with its eyes on me, but I couldn't see if it even had eyes. I blinked and then another flash struck right near where the scribbly humanoid figure was, and then he was gone. I couldn't take my eyes of that spot even as my brother and sister were freaking out from being so close to that small flash. To be honest I'm surprised we weren't electrocuted, but I think the figure sucked up the lightning, and it never got us. This still freaks me out just thinking about that humanoid lightning thing. - Reddit

Alien Universe: Extraterrestrial Life in Our Minds and in the Cosmos

Hunting for the Thylacine: Are There Still Tasmanian Tigers Roaming the Wild?