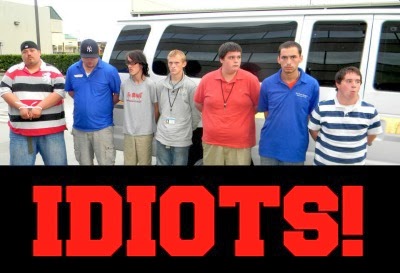 Four Grand Prairie residents were among a group of men arrested in Louisiana this week after they burned down a historic plantation where they were smoking marijuana and looking for ghosts, authorities said.

Seven people in all were arrested, including another person from Fort Worth who investigators reportedly called the ringleader of the group. They were charged with various crimes, including arson, burglary and trespassing.

They are accused of destroying the LeBeau Plantation House, a structure built in the 1850s in Arabi, La. The house was considered the largest pre-Civil War mansion still standing in the New Orleans area, according to local media reports.

The house was reportedly built on an indigo plantation, was later used as a hotel and casino and then was left vacant for its last 30 years. Local lore said that the house was haunted. Law enforcement told reporters that trespassing was a regular problem.

Authorities said that the men arrested were smoking marijuana and drinking on the site.

“They had been looking for ghosts, trying to summon spirits beating on the floors,” said Col. John Doran of the St. Bernard Parish Sheriff’s Office in an article posted on his office’s Facebook page.

When no ghosts emerged, the group set the mansion on fire, Doran said.

The fire happened Thursday night and the group was arrested the next day. The four men arrested from Grand Prairie were Joshua Allen, 21; Joshua Briscoe, 20; Jerry Hamblen, 17, and Joseph Landin, 20. The man arrested from Fort Worth was 31-year-old Dusten Davenport. The other two men arrested, Kevin Barbe, 20, and Byron Meek, 29, were from Louisiana. - crimeblog.dallasnews

Top 5 Imported Foods From China You Should Avoid

Chinese food scandals have made media headlines for years now. From deadly melamine in milk products to harmful honey, China has long allowed toxic food products (and other dangerous exports) to leave its borders. Most American media and the U.S. government have not made enough effort to inform the public that food from China may be dangerous and is rarely inspected by the Food and Drug administration. FDA inspectors examine a mere 2.3 percent of all food imports. Thus, it is left up to consumers to safeguard their own health by making smart choices about what to put on the table.

Here are the top 5 products imported from China that you should watch out for.

It is well known in China fish farmers won’t let their children eat the seafood they cultivate. There was a report in China a few years ago of a young girl living in a fish-farming village who started to get her period at age 7 because of the high levels of hormones used in fish cultivation. Farmers use strong antibiotics and growth hormones to keep fish alive in often overcrowded dirty conditions.

About 51 percent of cod on the U.S. market is from China, or about 70.7 million pounds per year. What is true for tilapia, is equally the case for cod farming.

If you are buying a bargain apple juice that doesn’t taste very good, it might be a product that has traveled a long distance—all the way from China. About 50 percent of the apple juice sold in the United States originates in China—about 367 million gallons per year.

Pesticide residues that remain on fruits, vegetables, and processed foods when they enter the food supply have long been a problem. China is the world’s largest pesticide producer and has largely failed to address illegal or dangerous chemical residues on foods, a fact made evident by the nation’s generous maximum allowable residue levels.

Try to steer clear of canned mushrooms; 34 percent of processed mushrooms are from China, or 62.9 million pounds per year.

There are many ways garlic can enter into all kinds of processed food. About 31 percent of garlic, or 217.5 million pounds per year, is from China. You might see label “organic product,” but in reality, there’s no third party to checking and certifying “organic” products in China. To turn a profit, anyone can label a product as “organic.”

* The above information is based on the 2011 data presented on May 8, 2013 in testimony before the House Committee on Foreign Affairs, Hearing on the Threat of China’s Unsafe Consumables. Food imports from China have been increasing by about 7 percent each year.

If you wonder how dangerous these food products could be to your health, check out these reports on environmental pollution in China.

Understanding the Pollution Problem in China

According to the South China Morning Post, “As much as 70 percent of Chinese rivers and lakes are polluted from industrial facilities like chemical and textile plants.” Recently, residents in Zhejiang, one of the less polluted provinces in China, offered 300,000 Yuan ($50,000) if government officials would dare to swim in the local waterway.

The U.S. embassy in Beijing releases air pollution reports each hour. Americans living in Beijing depend on that information to decide whether they’ll go out or not at that time.

There have been numerous reports on China’s horrific pollution of air, water, and soil. With that level of pollution, it is almost impossible to have safe food.

Here is a video made by a brave Chinese graduate of Beijing Film School, who sold his car and house, spent 5 years and 8 million yuan ($1.3 million), to film more than 2,000 hours of footage to make this 12-minute documentary. It has no narration, but a heart-wrenching score and images that tell a complete story. - The Epoch Times

High atop a platform inside a clean room at the European Space Agency’s (ESA) launch site in South America, scientists painstakingly searched for microbes near the Ariane 5 rocket due to launch the Herschel space telescope in May 2009. Only very unusual organisms can survive the repeated sterilization procedures in clean rooms, not to mention the severe lack of nutrients available. But the scientists’ careful inspection was fruitful, turning up a type of bacteria that had been seen only once before. Two years earlier this same bug had surfaced 4,000 kilometers away in the clean room at NASA’s Kennedy Space Center in Florida where engineers were preparing the Mars lander Phoenix for launch.*

After the two discoveries, the teams joined forces to analyze the bacterium, and found it was so different from known organisms that it constituted not just a new species, but a new genus, which they described in a paper published in July in the International Journal of Systematic and Evolutionary Microbiology. “This is the first report of bugs isolated in two different clean rooms, and nowhere else,” says Parag Vaishampayan, a microbiologist at the NASA Jet Propulsion Laboratory who led the team behind the Kennedy Space Center detection. Read more at Scientific American

In 1991 I was only 2 years old so I have no recollection of this event, although my dad finally decided to share it with me when I was about 15. My dad, my mom, and I were living in a sparsely populated town at the time, in a small house on a dirt road. One night after supper my dad noticed an unusually bright light coming down our road. He went to the window to get a better look at it, and was shocked to see a large orb of light floating above the road. He described the orb's appearance to me as looking like a sphere "illuminated and filled with every color, swirling and changing as it silently moved down the road." He called to my mom to come have a look, and they watched the orb as it hovered down the dirt road, eventually passing out of sight.

Before they could talk about what they had just seen, they heard a loud rumbling in the sky. My parents went onto the porch to see what was making the noise, and were surprised to notice black helicopters flying in the direction that the orb had gone. They stood on the porch for a few minutes quietly watching the sky. Suddenly my mom was illuminated by a beam of blue light. My dad pulled her out of it and threw her inside, inadvertently putting himself into the beam. This is the last thing he remembers before coming to his senses again.

He was standing alone in the living room, and noticed that there were two beings standing in front of him. He said that they were about 4 feet tall, with no discernible ears, a slit for a mouth, and large almond shaped eyes. They were simply staring up at him. He noticed that there was a 3rd being that was standing in front of me, with its face only inches away from mine. I was talking to it excitedly, seeming to float against the wall and happy to communicate with my visitor. My dad began to become extremely agitated at this point, but felt that he was paralyzed from the neck down.

My dad woke up the next morning and asked my mother about the experience. She didn't remember any of the experience. He chalked it up as being another dream, but refused to let me sleep alone in my room for about a week after the incident. My dad had no interest in UFO's, aliens, or the paranormal, and has never been diagnosed with any form of drug abuse or psychosis. My family has an unusually high number of strange encounters, and I've had multiple experiences with beings of unknown origin since this. I've noticed that each new experience seems to be more novel than the last. - EzekielsWheel - Reddit

Aliens in Ancient Egypt: The Brotherhood of the Serpent and the Secrets of the Nile Civilization

Did Giants Once Live in Giant Buried Cities Across America?

The Highpoint of a Cover-Up

Haunted by a Black-Cloaked Entity