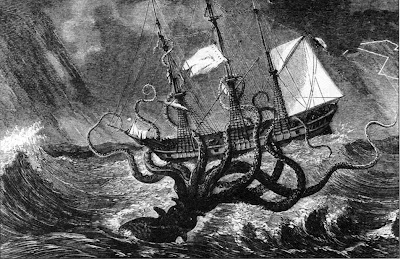 Did the Kraken Exist?

Some researchers believe that there is enough evidence to suggest that the kraken actually existed.

The most infamous of all deep sea monsters, the legendary kraken has been the subject of folklore, mythology and science fiction for centuries. Often depicted as a humongous squid-like creature, the beast was said to have devoured ships and consumed many an unwary sailor to satiate its appetite.

Stories of the kraken may not be entirely restricted to the realm of fiction however as recent research has revealed tantalizing evidence that this behemoth of the deep may have actually been a real creature, albeit a prehistoric one.

Palaeontologist Mark McMenamin believes that he's found signs of a large octopus-like creature by analyzing the way in which the remains of 14-metre ichthyosaurs at Nevada's Berlin-Ichthyosaur State Park are arranged.

According to McMenamin, the way the bones are organized is the same as the way modern-day octopus species tend to arrange and fiddle with bones. He also believes the remains were found in a much deeper part of the ocean, an environment in which large cephalopods are likely to be found.

His most convincing piece of evidence however is a rock that is believed to be a fossilized segment of a giant octopus' beak. Comparisons between the prehistoric beak and that of a modern day Humboldt squid have revealed striking similarities.

"I suppose the kraken argument is a possibility, but one of many, and a highly unusual one," said palaeontologist Spencer Lucas. "What we need here is a more rigorous analysis that excludes the many alternatives to the kraken idea." Read more at ABC

Kraken: The Curious, Exciting, and Slightly Disturbing Science of Squid

Here There Be Monsters: The Legendary Kraken and the Giant Squid

Evidence that large cats are roaming wild across the UK

Sightings of large predatory cats have persisted across the British Isles for years. While it has long been suspected that a population of these animals has been roaming the countryside, conclusive evidence of their existence in the UK has been thin on the ground.

Dr Andrew Hemmings of the Royal Agricultural University has been conducting his own study in to the phenomenon over the last 12 months and hopes to determine once and for all whether there really are large cats on the loose across Britain. To do this, he's been examining the remains of wild animals believed to have been killed by one.

Supplied by volunteers, farmers and landowners, the remains each show signs of an attack by a predatory creature. Smaller predators such as badgers and foxes can be quickly ruled out, however eliminating domestic dogs as the culprit is a bit more difficult. To achieve this, Dr Hemmings analyzed the indentations of the carnassial teeth which are further apart in big cats than in dogs.

"At the moment, there are three I have found which are weighing in favor of the cat, so it is very tentatively pointing that way," he said. "All three are certainly wider than you would expect to find in a dog imprint. But we need to let the sample size build up before we have anything approaching a statistical basis." Continue reading at Telegraph

The Clearfield Arts Studio, Inc. (CAST) is delighted to present an evening that is sure to be of special interest to area residents and to anyone anywhere who has wondered about the existence of that elusive creature known as Bigfoot. CAST will be the scene of the premiere of the film MOUNTAIN DEVIL: The Search for Frank Peterson Saturday, November 23, 2013. Doors will open at 6 pm for the 7 pm showing.

“When Producer/Director Ryan Cavalline first contacted me about doing a program on Bigfoot at CAST, I said “yes” immediately,” said Ruth Loffredi, CAST executive director. “To begin with, this is a big topic around this area. It’s exciting to speculate and think about what might be roaming through the Pennsylvania forests and in our case, especially around the Rockton Mountain area. Stories have been passed around for years about the possible existence of such a creature. This gives us all a chance to be entertained and more informed at the same time."

Ryan and a group of adventurous and knowledgeable Bigfoot enthusiasts and investigators have spent considerable time researching, trekking through the forest, talking with other interested parties trying to find answers to the questions that have plagued many for a long time.

The following is part of the information that Ryan emailed me after our first conversation, said Loffredi.

“Bigfoot research has revealed a number of theories about the elusive creature ranging from the paranormal to an evolutionary link to our past. The evidence to support any of these theories has been largely questionable or even dismissed. Now comes new insight into the one unsolved case that has not only avoided the media for years, but could also finally offer a definitive answer to the reality of Bigfoot. Mountain Devil introduces long kept secrets concerning one frightening night spent at a secluded mountain cabin by Frank Peterson and his long time friend. Peterson’s unearthed personal journals and photos serve as the tapestry in which the events are painted. Mountain Devil connects the present with the past by following current researchers and experts on location and into their ongoing search for the truth. Frank Peterson’s most compelling evidence for his encounter lies in the 8mm film taken of that early morning event.

Documenting new sightings and investigating the old, the film crew invites the viewer to a fresh exploration into one of the most intriguing questions plaguing us about our own backyard – the existence of Bigfoot.”

Tickets for “MOUNTAIN DEVIL, The Search for Frank Peterson” are $6.00 and can be reserved by calling the CAST office at 765-4474.

The CAST Building is the area’s non-profit performance center and is located at 112 E. Locust Street in downtown Clearfield. The website is www.castbuilding.com.

Monsters of Pennsylvania: Mysterious Creatures in the Keystone State

Bad Mummification: King Tut's Corpse 'Blew Up' in the Tomb

The story of King Tut's death—and what followed—just got even more interesting, all thanks to a single piece of flesh. That remnant of Tutankhamun is the only one of its kind known to exist outside Egypt, and British experts decided to analyze it after stumbling upon a decades-old record by one of the archaeologists who found Tut's tomb in 1922. That record indicated the body had been burnt, and a scanning electron microscope and chemical tests proved that was indeed the case, reports the Independent. But here's the truly intriguing part: The body caught afire after it was sealed in its sarcophagus, essentially "spontaneously combusting," says Egyptologist Chris Nauton.

The scientists' theory is that the mummification was bungled and that the body caught fire due to an unfortunate chemical reaction spurred by the combination of oxygen, embalming oils, and linen; the temperature would have reached 400 degrees Fahrenheit. Raw Story adds that the researchers also partnered with a team of car crash investigators whose computer simulations seem to verify the leading theory as to cause of death: a chariot accident. The injuries sustained on one side of his body (as revealed by what the Independent calls a "virtual autopsy") suggest a chariot crashed into Tut while he was on his knees, crushing his heart. The findings will be presented in a documentary airing Sunday in Britain. Scientists believe Tutankhamun may have fallen from the chariot while hunting. - Newser

Zombie Neuroscience: Inside the Brains of the Walking Dead


The Bigfoot Filmography: Fictional and Documentary Appearances in Film and Television