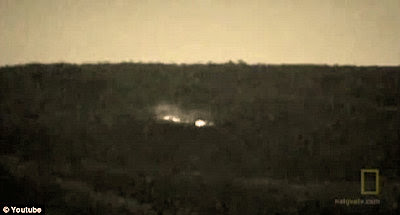 Channel 12 (WXII12 possibly?) showed the car through a fence at the Burke County Sheriff's Impound yard. It did have the back windows out including the rear window and the back of the car had extensive damage from what was shown.

The story originates from an Asheville newspaper clipping posted to the web page. According to the report, the couple had been visiting Brown Mountain in North Carolina in an attempt to catch a glimpse of the mysterious ghost lights that have been sighted there over the years.

After watching and waiting for two hours the couple finally saw some lights to the west, but rather than sitting back to enjoy the spectacle the pair were instead confronted with a strange flying object that headed towards them and actually bumped in to the top of their car.

The bizarre tale goes on to claim that as the couple attempted to drive away the object held the vehicle in place, preventing their escape. During the struggle, the object allegedly hit the roof with such force that the back window smashed and the car was crushed by about eight inches.

NOTE: I honestly don't know if this incident occurred or not, but it's the first I have heard of a UFO attack at this location...Lon 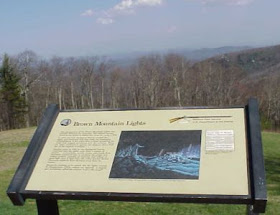 Brown Mountain lies in the foothills of the Blue Ridge Parkway with an elevation of only 2,600 feet. The Brown Mountain Lights of Burke County, near Morganton NC, have intrigued residents and visitors for hundreds of years. The lights are mentioned in local Native American mythology, and by Geraud de Brahm, a German engineer and the first white man to explore the region, in 1771. The lights have been described in many ways from being a glowing ball of fire, to being a bursting skyrocket, or a pale almost white light. The fact that they never seem the same is as fantastic as the lights themselves. At times they seem to drift slowly, fading and brightening and at other times they seem to whirl like pinwheels, then dart rapidly away.

One of the legends explaining the Brown Mountain Lights was of a planter from the low country who traveled to the mountains to hunt, and became lost. One of his slaves came to look for him and was seen searching through the hills with a lantern, night after night. Now, according to the legend, the old slave is gone, but his spirit remains and the old lantern still casts it's light.

Another such legend is of a woman who disappeared about 1850, the general suspicion was that her husband had killed her. Almost everyone in the community joined the search for her and one dark night while the search was on the strange lights appeared on Brown Mountain. Some of the searchers thought that this was the dead woman's spirit come back to haunt her murderer and warn the searchers to stop looking for her body. The search ended without a trace of her body, but long years afterwards a pile of bones was found under a cliff and were identified as the skeleton of the missing woman.

The Cherokee Indians were familiar with these lights as far back as the year 1200. According to Indian legend, a great battle was fought that year between the Cherokee and Catawba Indians near Brown Mountain. The Cherokees believed that the lights were the spirits of Indian maidens who went on searching through the centuries for their husbands and sweethearts who had died in the battle. Early frontiersman believed that the lights were the spirits of Cherokee and Catawba warriors slain in an ancient battle on the mountainside. Some say the lights are just a troop of candle-bearing ghosts destined to walk back and forth across the mountain forever.

Of the many scientific theories made to explain the Brown Mountain Lights, none have been proven. Some suggest that the lights are caused by a combination of several minerals and gases in the area. One geologist suggested that possibly deposits of radioactive uranium ore in the area may be responsible for producing the lights. Another suggests phosphorus, but this element oxidizes quickly and is not found here. Pitchblende Ore, from which radium is derived, has been mentioned, but the rays from radium are invisible.

Some scientists have advanced the theory that the lights are a mirage. Through some peculiar atmospheric condition they believe the glowing balls are reflections from Hickory, Lenoir, and other towns in the area. The only drawback to this theory is that the lights were clearly seen before the War between the States, long before electricity was used to produce light.

A U.S. Geological Survey decided in 1913 that the lights were locomotive headlights from the Catawba Valley south of Brown Mountain. However, three years later in 1916 a great flood that swept through the Catawba Valley knocked out the railroad bridges. It was weeks before the right-of-way could be repaired and the locomotives could once again enter the valley. Roads were also washed out and power lines were down. But the lights continued to appear as usual. It became apparent that the lights could not be reflections from locomotive or automobile headlights.

A second U.S. Geological Survey report disposes of the cause of the Brown Mountain Lights by saying they are due to the spontaneous combustion of marsh gases. But there are no marshy places on or about Brown Mountain.

The lights can be seen from as far away as Blowing Rock or the old Yonahlosse Trail over Grandfather Mountain some fifteen miles from Brown Mountain. At some points closer to Brown Mountain the lights seem large, resembling balls of fire from a Roman candle. Sometimes they may rise to various heights and fade slowly. Others expand as they rise, then burst high in the air like an explosion without sound.

Brown Mountain is located in the Pisgah National Forest, in the Blue Ridge mountains of Western North Carolina. There are several places where the lights can be seen, here are a few of the more popular places.

The Brown Mountain Lights are a somewhat rare occurrence, and are not always visible. To see the lights you need good visibility between your viewpoint and Brown Mountain. Clear weather conditions with little or no moonlight are the most favorable for viewing the lights, but the lights have been seen during hazy conditions and light rain. The lights have been reported to be seen at all hours of the night between sundown and sunrise, but the best noted times are at 10:00 PM and 2:00 AM. The locals also say they are much more prominent in the months of September and October.

One thing is certain, the lights do exist. They have been seen from earliest times. They appear at irregular intervals over the top of Brown Mountain. They move erratically up and down, are visible at a distance, but vanish as one climbs the mountain. From the Wiseman's View on Linville Mountain the lights can be seen well. They at first appear to be about twice the size of a star as they come over Brown Mountain. Sometimes they have a reddish or blue cast. On dark nights they pop up so thick and fast it's impossible to count them.

Who knows what causes the Brown Mountain Lights, but if you view them, as I have, you can say you have viewed a natural phenomenon that scientists have yet to explain. - westernncattractions.com / ncsmokymountains.com

The Brown Mountain Lights and The Mesozoic Phoenix

Join the BTE Team at the 'Beyond The Edge' Radio Google+ Community
Announcements, videos, discussion, etc. coming your way!