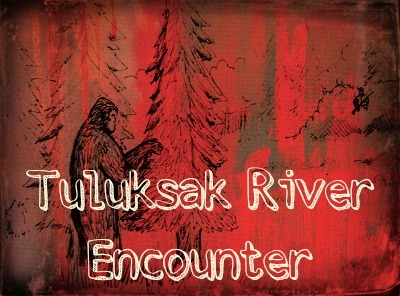 The Delta Discovery reports on very interesting real-life encounters between the native people and the 'Big Hairy Man.' Here is one of the narratives:

Some years ago, my brother Allen and I went moose hunting up the Tuluksak River during one weekend in late September, when moose hunting used to be 30 days long. We brought along Mitchell, a friend who worked at the Bethel Hospital as a licensed practical nurse.

It took most of a day to get way up the Tuluksak River in a 40 hp short shaft and jon boat and we camped pretty close to the Kilbucks. The next morning, we heard a bull grunting upriver inside a feeder stream, so my hunting partners went to go check on it while I went off in the opposite way, a little downstream from our camp. My brother said they could hear the bull grunt and rake brush occasionally, and despite their best efforts to coax him out, it did not show himself.

I myself had stopped on the edge of a clearing on top of high ground and hid myself in brush to watch the river and clearing for animals. Some time later, I saw something walking across the clearing but it was walking upright like a human. I first thought it was an animal, either a moose or a bear, but as it came closer, I couldn’t really figure out what it was. I saw the upper part of the body – head and shoulders – above the tall grass, and when it reached high ground it walked with a side-to-side sway of the body, like a person does when climbing a hill. 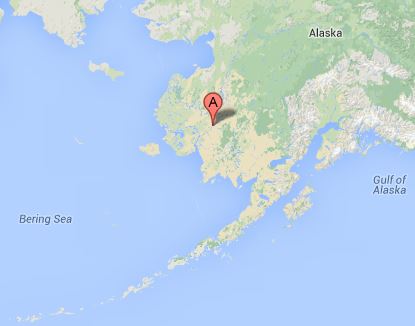 Then I thought it might be another hunter – but as far as we knew, we were the only ones in the area and we didn’t see any other hunters or camps below us. The odd thing about this “person” was that it had reddish hair all over, and the morning sun glistened off its head and shoulders. It was a couple hundred yards away or more.

Then Mitchell or my brother broke a dry stick while walking down to camp. The noise of the breaking stick was loud during the calm sunny morning and it carried far. The man-beast suddenly straightened up and froze, looking in the direction of the noise. A few moments later, it side-stepped slowly toward a couple spruce trees about 18-20 feet away and stopped between them, standing still. It watched for a long time for the source of the noise.

I also watched the animal for a time. The hairy man never moved. After a while, I realized this was not an animal that I knew and I began to feel a little uncomfortable about it, so I slipped out of my hiding place and walked quietly back to camp.

When I told my brother I’d seen some kind of animal, he got excited that I might’ve seen a moose instead. We all went to check the spot where I saw the creature but it wasn’t there anymore.

In fact, we saw nothing more during our hunt so we headed back to Bethel before dark set in, since we all had to go back to work the next day. - Delta Doscovery

NOTE: Here is another related post - The 'Big Hairy Man' of Alaska

Arctic Homestead: The True Story of One Family's Survival and Courage in the Alaskan Wilds