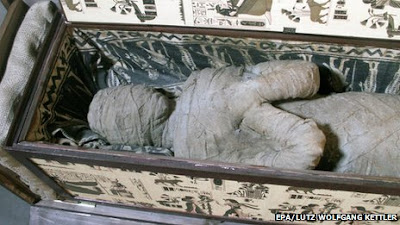 A 10-year-old German boy has found what appears to be a mummy hidden in a corner of his grandmother's attic.

The "mummy" was inside a sarcophagus complete with hieroglyphic adornments, packed in a wooden crate.

But it is unclear whether the bandaged item found by Alexander Kettler in Diepholz, northern Germany, is a genuine relic from ancient Egypt.

Alexander's father Lutz Wolfgang Kettler, a dentist, said he had not X-rayed the mysterious find.

Instead he plans to load it into his car and drive it to Berlin to be examined by experts, he told the Bild newspaper.

However, he believes the mummy may be real.

The dentist's late father travelled to North Africa in the 1950s.

At that time there was still a trade in genuine mummies, Mr Kettler told his local paper, Die Kreiszeitung.

And there was a trend for mummy unwrapping parties in the 1950s, he said.

Asked if the "mummy" smelled bad, Mr Kettler said no.

It had lain undisturbed in the attic for at least 40 years, he said. - BBC

Okmulgee, OK - 8/2/2013 - unedited: Outside at my sister in law home smoking.
I noticed the object while looking for an usual commercial airplane altitude. When I turned my head toward the east, I saw this enormous objects.
When I first saw it I was astonished cause of the size. It was hovering horizontally in the sky. I told my sister to come check it out and the object was vertical at that point.
When I saw it I had no doubt in my mind that it was a UFO. It was hovering, it was as big as a skyscraper, had 3 bright light that allowed me to make out the color,metallic silver.
It was approximately between 4 -5 am
As soon as I noticed it was sitting horizontally on the eastern sky of Oklahoma, I called my sister in law cause I wanted her to see it. I looked and the object was vertical at that point.
Before she could get a good look of it, this " mountain" flew up at a speed none of our aircraft could even come close to attempt, due to the monumental size of this object, I still cant believe what I saw last night. I never ever seen anything that can even come close to it. It was enormous ! It was cigar shaped but rounded on one side, and I dont understand how something so big could disappear in matter of seconds!!! - MUFON CMS

NOTE: This report sounds very familiar to others I have seen and received from Oklahoma and north Texas:


I received the following email last evening that refers to a remarkable encounter experienced by a very reliable witness:

I want to share something strange and unusual that happened on this Easter Sunday night April 24th, 2011.

I had been to a Church's Easter Service night Cantata in Texas. I was driving to get back home on a desolate Farm to Market Road as their was not much traffic on it day or night.

The night was very clear and stars were bright and beautiful. I saw in the east as I was driving east a very bright star or at least, that is what I first perceived, but then I noticed that this star or object was moving, so I in turn, pulled my vehicle off on the side of the road to get a better view. It kept approaching and getting larger as it came forward and finally to a complete stop. I got out of my vehicle to get a better look.

I realized, that this was not a star and it was rather a huge object, sort of like a silver cylinder and it had red, orange, green and white lights on top of it. I thought this was strange, by this object coming to a complete standstill and I could not hear any noise.

I just for a second glanced to my left, which was North and I saw this other bright star, again that is what I again perceived coming from the North and as it came closer, it had the same color lights on it.

Well it approached the other standstill object it came to a standstill also. I was amazed and I happened to look at my watch and it was 10:15 PM.

The two objects remained stationary and the only thing that was active were the rotating lights on both objects. After about 10 minutes, the object that came from the north extended a wide red laser or something similar to the other object and that went on for about 15 minutes...they seemed to be a distance between the objects when this wide red laser went to the other object and it reminded me of someone or something rolling out a red carpet. At times, I saw what looked like little black dots within this red whatever.

After about 15 minutes, this red carpet started retracting back in to the north object. When that happened, this object from the east after close to 5 minutes, started moving sideways to the south, then moved upward and then shot to the south at a high rate of speed and finally disappeared.

The other northern object, after the other object had disappeared going south, it started to lift high and then it shot off at a high rate of speed back to the north, whence it came from and disappeared.

I don't know what I saw that night, but I will never forget it, I have not spoke to anyone about what I saw.

So I figured they were making a transfer of something or maybe not, but I have thought about this red carpet scenario several times since as well as what these two objects were, that came together side by side and became stationary and after the red carpet whatever, both objects left at a very high rate of speed and disappeared. Very strange indeed. But anyway, this is what I saw on Easter Sunday night. I eventually made it home, but my thoughts of these two objects, were on my mind and for days to come, I still think about them from time to time.

Thank you for taking the time to read whatever encounter, I had with two unknown objects.

NOTE: Though I was not told of the location, I believe this incident took place in northeast near the Oklahoma-Texas border. The witness is fairly well-known so I'm going to hold off posting the identity for now. If I get a confirmation of the location and any other information, I will update here...Lon

UPDATE: After an inquiry, I received the following from the witness: 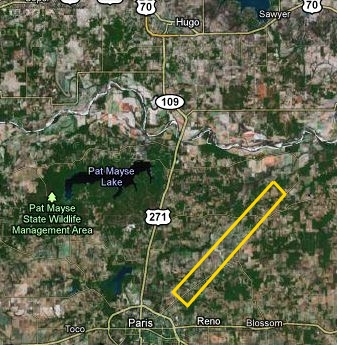 I apologize for not getting back with you before now.The incident occurred in Northeast Texas between Paris, Texas and Hugo, Oklahoma on FM Road 195 where the Church was located.

I stated in my earlier email to you, that the objects, looked cylindrical, because of the multi-colored lights that were flashing were on top and the length of them on the objects showed that they were on a cylindrical object, not a circular one. Again, there was no sound and when they left, it was at a high rate of speed and just vanished. The rolling out of the "Red Carpet" scenario, was really strange as it was a bright red in color and what looked like black dots of some kind and those were not visible at first, but I suppose 2 minutes into what I call a "transfer" then they appeared on the "red carpet" and they looked like they were moving on the "red carpet".

That's about all I can say about whatever I saw that night, but I do think altogether, it was very strange indeed.

NOTE: Here is a compilation of these sightings: Cylindrical Circumstances

Staff at a zoo in the Netherlands say they are baffled by their baboons, who have spent days sitting still, huddled together in fear and hardly eating.

The behaviour started on Monday evening, and only now are the 112 baboons becoming their normal, active selves again, said a biologist at Emmen Zoo.

The zoo still has no idea what spooked the hamadryas baboons, but it is a good sign that some are now eating apples, biologist Wijbren Landman said.

"What frightened them? We don't know, it's a mystery. There have been many suggestions - an earthquake, escaped snakes, aliens, thunder," Mr Landman told BBC News.

"The other animals here are OK - they have lemurs, elephants and kangaroos as neighbours, and they show no sign of panic."

Emmen lies in the north-eastern Netherlands, near the German border.

Mr Landman said he had consulted a French baboon expert who had witnessed such baboon hysteria in the wild, triggered by awareness of a predator. But the French expert said such hysteria had not lasted as long as in the Emmen case.

"The first deviation we saw was on Monday evening," Mr Landman said.

"We were going to bring them to the night enclosure - it normally takes a minute for all 112 to enter, but it took more than an hour to get them all inside. Then the next morning it was a problem to get them out, and then they were immediately sitting in the trees and on the rocks doing nothing at all."

He said some males in the hierarchy must have got frightened for some reason, and the rest of the baboons followed their lead.

According to Mr Landman, it is unlikely they would have been spooked by a fox, as the zoo is in the city centre, and they are used to seeing herons flying low over their enclosure, so a bird of prey is also an unlikely cause.

The Emmen baboons had similar scares in 1994, 1997 and 2007 and some would have experienced the previous hysteria, as hamadryas baboons can reach the age of 30, Mr Landman said. - BBC

People Who Love The Night Have Psychopathic Traits