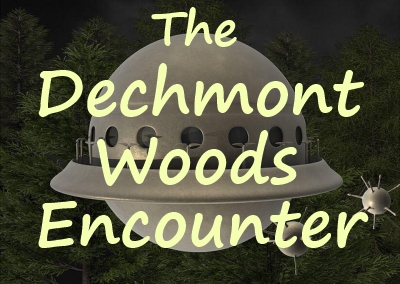 Robert Taylor was sixty-one-years-old at the time that he had the most unusual encounter of his life. He was an unassuming man, steady, phlegmatic, with a thick brush of white hair and a craggy outdoorsman's face. He liked a pint, and a dram too, but not when he was working. He smoked, but not too many. He had worked as a forester all of his adult life in the Dechmont woods located in Livingston, West Lothian, Scotland. On the morning of Friday, November 9, 1979, Mr Taylor set off that morning, with his red setter Lara, to check the woods on Dechmont Law for stray sheep and cattle. It was a damp day and, after he had parked the van and set off down the forest track, even the noise of the Edinburgh-Glasgow motorway was muffled by thick, dark fir trees. The dog ran, and Mr Taylor's trudging wellingtons made the only sound. Then he turned a corner into a clearing filled with light, and saw it...a UFO!

The object was a dark gray color, and its texture was like an emery board: small brighter highlighted areas against a darker background. The appearance of the exterior seemed to change from time to time. Taylor thought that the UFO was attempting to camouflage itself. He estimated the size of the object as 18-20 feet around, and about 12 feet high. It looked to be mounted on a ring, making the object look like a hat with a brim. There were also protruding from the outside of the craft stems topped by propellers. Nothing at the time moved on the object. 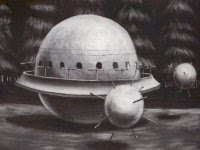 Suddenly, two small spheres rushed at him. They were like the large craft, only a much smaller version. They made a sound as they moved toward him, as spikes on the outside made ground contact. They stopped by his side, and attached themselves to his trousers. They began to drag him back to the UFO. He also was sickened by an extremely strong smell which caused him to pant for air. He soon lost consciousness.

When Taylor came to, the UFO and the smaller spheres were gone. His red setter was still with him. The dog was unsettled, running around the area, and barking madly. Trying to holler at the setter, he had no voice. He could not stand either. Eventually, he crawled back the way he had come for about 300 feet. In time, he was able to stand up and walk back to his pick-up. He attempted to contact the forestry headquarters with his two-way radio, but found his voice was still not back.

Taylor tried to go back home in his pick-up truck, but only got stuck in the mud. He then began the long walk back to his house, approximately a mile distance, and finally arrived at 11:15 AM. His entire experience had lasted just over an hour. His voice had now returned. He had developed a headache, and a great thirst by the time he came to his home. It took some two days for his thirst to abate, though he could still smell remnants of the awful odor from the small spheres. He generally felt ill.

Arriving at this house, his wife was stunned to see his condition. He was covered with mud, and his pants were torn. He began to tell her the story of his experience. His wife wanted to call the police, but Taylor was against it, considering the subject of the matter. He did allow her to call his job supervisor, and the head of the forestry department, Malcom Drummond. He took a bath while she made the calls.

Drummond called a physician, and drove straight to Taylor's house. He was so anxious to find out what happened that he questioned him while he was still in the bathtub. Taylor and Drummond agreed that there must be some kind of physical evidence left on the ground by either the craft or the small spheres, and Drummond headed to the area to check it out, but he was unable to find the exact location. 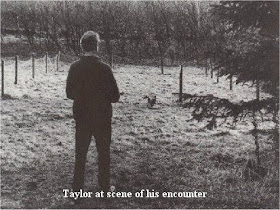 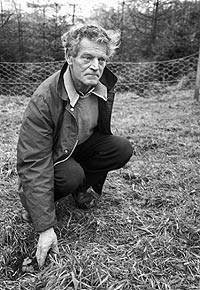 Dr. Gordon Adams arrived and began to check out Taylor's condition. He found a grazed area on Taylor's left leg, and another graze under his chin. There were no apparent head injuries. At this time, anyway, Taylor's body temperature, blood pressure, and other body functions seemed normal. Adams called in for an ambulance to transport Taylor to the hospital for a head X-ray and an interview with a counselor. Taylor refused to make the hospital visit until later.

After Drummond came back to Taylor's house, the two men set out to return to the scene of the UFO, and attack of the small spheres. They found the ground markings, and called the police. Shortly thereafter, Taylor, accompanied by his wife, went to the hospital for the X-ray, but he was kept waiting so long, he decided to leave unattended. He was anxious to make a planned trip to see relatives on the weekend.

Soon, the press heard about the encounter in the woods, and by Sunday, it was known about all over the United Kingdom. News of the event was known all over the world within a week. The story would be the subject of television documentaries, magazines, and books. The company that Taylor worked for even erected a plaque at the site, commemorating the event. It was later stolen.

The local police department had no experience in dealing with UFO cases. Because of this, at least they never discounted Taylor's description of the incident. They did take testimony from Taylor, his wife, and Dr. Adams. Because an assault was involved, the police were required to send his clothing of that day for forensic examination. A cursory overview showed that both of his pant legs were torn at the hip area. Also found by the exam were traces of a powder.

This powder turned out to be nothing more than a maize starch which was transferred to the trousers by the bag they were sent in. The police also checked for any flights that might have occurred that day of planes, helicopters, or any other equipment that might have been in the area. Nothing was found, and none of the forestry equipment matched the marks found at the scene. There were two types of ground markings found at the scene. The first marks were two parallel ladder-like tracks, each about 2.5 meters long, and the same distance apart. There were also 40 holes around the tracks. They were 10 centimeters across. To cut to the chase, there was ample physical evidence to prove that "something" had been on the spot that Taylor indicated. Taylor was known by many people in the area, and they all viewed him as honest and responsible. There is nothing to indicate that he would hoax an incident of this nature. He did have a history of several illnesses, and surgeries, but there was nothing in his medical history that would indicate he had any type of head injury or psychosis.

There would also be a timeline done by an investigator to determine the length of time that Taylor was unconscious. This accounting indicated that he was probably out of it for about twenty minutes, give or take.

“I know what I saw,” said Mr Taylor. So stringently did he stick to his tale (and kept a camera with him ever after, to take the aliens' pictures if they ever came for him again) that the police opened a criminal investigation for assault, the only one in Britain to arise from a UFO “sighting”. It remains open.

Mr Taylor's neighbors proving much more skeptical, he eventually moved away to an undisclosed address. But he also became the most famous “witness” to aliens in Britain. His trousers were taken to spiritualist meetings to be analyzed by psychics (“I feel pain from these trousers”), and on anniversaries of the sighting UFO-spotters would gather in the clearing, just on the off-chance.

The aliens, meanwhile, did not give up. Since that November day they have filled the skies of West Lothian with glimmering discs, strange lights and bouncing balls of fire. The “Falkirk Triangle” now registers more UFO sightings, around 300 a year, than any other spot on Earth. A good many happen outside the Forge restaurant in Bonnybridge, where fireballs sail over the trees and “wingless planes” are seen in the fields. Some experts say West Lothian may be a “thin place”, offering a window from the Earth into another dimension.

If we take Taylor's account as is, he was abducted by something "other-worldly" on November 9, 1979 for about twenty minutes. There has been no evidence presented to discount his story. By all accounts Taylor was well respected by friends, neighbors, co-workers, etc., and never attempted to make money from his alleged experience.

NOTE: Most of the accounts I read on this encounter were fairly similar. It is regarded as the most renown alien abduction case to occur in Scotland but beyond Great Britain it doesn't seem to garner as much attention as other reported occurrences. The West Lothian area continues to experience a great deal of UFO activity...Lon
Lon Strickler at 3:03 PM
Share
‹
›
Home
View web version