The Dogon, the Nommos & the Sirius Mystery 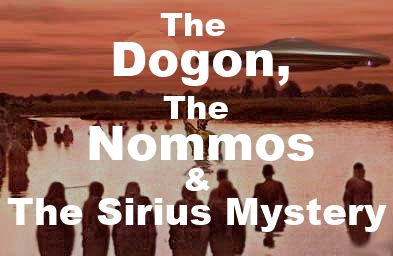 Back in December 2010 I received the following email from JKH of Goodland, Kansas:

I have emailed you before about things I've seen, but I'd like to see if you know anything about something I read years ago.

It was about the Dogon tribe in Africa, and their "history sticks". I saved the link on an old computer, but it is not functioning at the moment. I started out on some site about conspiracy theorists, but ran across the article about the Dogons. One of those "you can't stop reading" type things. Was about 10am when I started...in May...and next thing I knew the sun was going down.

Anyway, long story short, they were told by "the alien fish people" about 2 stars near Sirius (that have been confirmed by science about 5000 years after the history sticks that have the info), which the fish people were from a planet near them, and they were returning. Anyway, this isn't something to really post, but it was an amazing read, and if you've never heard of it, you might try and find it.

Since my original post, I received other inquiries related to the Dogon...so I present an updated version including links: 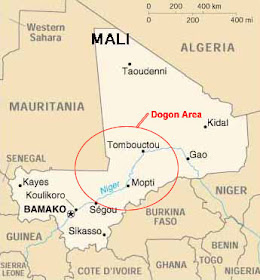 The Dogon people are a reclusive tribe of cave and hillside-dwelling farming people inhabiting a sparse, rocky plateau in southeastern Mali, West Africa. They live in the Homburi Mountains near Timbuktu. Isolated topographically and culturally from the outside world for countless centuries, they may well appear on first sight to be exceedingly unlikely receptacles of highly advanced astronomical knowledge ­ which only goes to show just how easily we can be deceived by outward appearances.

They are believed to be of Egyptian descent. After living in Libya for a time, they settled in Mali, West Africa, bringing with them astronomy legends dating from before 3200 BCE.

At the center of their religious teachings is knowledge about a star that is invisible to the eye and so difficult to observe (even through a telescope) that no photographs were taken of it until 1970. The Dogon say they received their knowledge by visitors to the earth from another star system.

The star they describe is Sirius B. Its existence was first suspected by Western astronomers in 1844, when irregularities were detected in the movement of Sirius. It was supposed that Sirius must be affected by a second star, and in 1862 a faint companion star was finally detected. Sirius B is a white dwarf that, although small and faint, is extremely dense and heavy enough to exert an influence on Sirius A.

The Dogon name for Sirius B (Po Tolo) consists of the word for star (tolo) and "po," the name of the smallest seed known to them. By this name they describe the star's smallness...it is, they say, "the smallest thing there is." They also claim that it is "the heaviest star," and white. The Dogon thus attribute to Sirius B its three principle properties as a white dwarf: small, heavy, white.

They go on to say that it has an is elliptical orbit, with Sirius A at one foci of the ellipse (as it is), that the orbital period is 50 years (the actual figure is 50.04 +/- 0.09 years), and that the star rotates on its own axis (it does). The Dogon also describe a third star in the Sirius system, called "Emme Ya" ("Sorghum Female"). In orbit around this star, they say, is a single satellite. To date, Emme Ya has not been identified by astronomers.

In addition to their knowledge of Sirius B, the Dogon mythology includes Saturn's rings, and Jupiter's four major moons. They have four calendars, for the Sun, Moon, Sirius, and Venus, and have long known that planets orbit the sun.

The Dogon say their astronomical knowledge was given to them by the Nommos, amphibious beings sent to earth from Sirius for the benefit of mankind. The name comes from a Dogon word meaning "to make one drink," and the Nommos are also called Masters of the Water, the Monitors, and the Teachers. 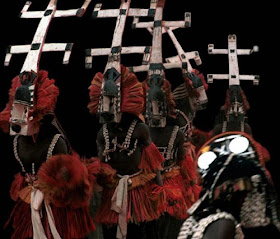 The Nommo was crucified and resurrected and in the future will again visit the earth, this time in human form. Later he will assume his amphibious form and will rule the world from the waters.

The first Western scientists to visit and study the Dogon people were French anthropologists Drs Marcel Griaule and Germaine Dieterlen, who initially made contact with them in 1931, and continued to research them for the next three decades, culminating in a detailed study conducted between 1946-1950. During their work, these anthropologists documented the traditional mythology and sacred beliefs of the Dogon.

"Several specialists now claim they have found the long-sought "final evidence" of visits made to earth by ancient astronauts. The myths of the Dogon tribesmen of Mall, West Africa, contain astronomical knowledge which the native people could have neither learned by themselves nor guessed. Obviously, the researchers say, some more advanced civilization told them. These fascinating Dogon legends speak of Jupiter's four moons and Saturn's rings, which were not seen by human beings until the invention of the telescope. They speak of the star Sirius and of a pair of invisible companions. One of them circles Sirius every fifty years, the legends declare, and is made of a metal that is the heaviest thing in the universe. Astronomers have discovered that such an object (called "Sirius-B") does exist but only the most sophisticated and sensitive instruments...unavailable, of course, to the Dogons -- can detect it." - 'The Sirius Mystery' - Robert K. G. Temple 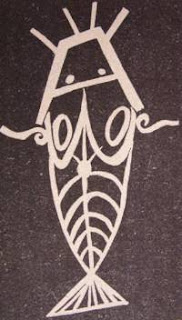 The Dogon tells the legend of the Nommos, awful-looking beings who arrived in a vessel along with fire and thunder.

After they arrived here, they put out a reservoir of water onto the Earth then dove into the water.

There are references in the oral traditions, drawings and cuneiform tablets of the Dogons, to human looking beings who have feet but who are portrayed as having a large fish skin running down their bodies.

The Nommo was crucified and resurrected and in the future will again visit the Earth, this time in human form. Later he will assume his amphibious form and will rule the world from the waters.

The Nommos, who could live on land but dwelled mostly in the sea, were part fish, like merfolk (mermaids and mermen).

It was from the Nommos that the Dogon claimed their knowledge of the heavens. 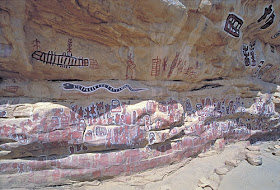 Carl Sagan concluded that the Dogon could not have acquired their knowledge without contact with an advanced technological civilization. He suggests, however, that that civilization was terrestrial rather than extraterrestrial. Western Africa has had many visitors from technological societies located on planet Earth. The Dogon have a traditional interest in the sky and astronomical phenomena. As Sagan noted, if a European had visited the Dogon in the 1920s and 1930s, conversation would likely have turned to astronomical matters, including Sirius, the brightest star in the sky and the centre of Dogon mythology.

In 1966, Robert Temple, a fellow of the Royal Astronomical Society and the author of several books, happened to read some of the Griaule material on Dogon Cosmology, and in 1968 he obtained an English translation of Le Renard Pale. He became interested in the question of how the isolated Dogon could have known for hundreds of years that Sirius, one of the brightest stars in the sky, has an invisible companion, Sirius B. Sirius B, a type of star called a white dwarf, is so small that it cannot be seen without a telescope. It was completely unknown to astronomers until 1862, when the American astronomer Alvan Clark managed to see it for the first time. Sirius B, like all white dwarf stars, is composed of densely packed matter that, if it is not the heaviest matter in the universe, is very close to it. It was not discovered until around 1926 that white dwarves are so heavy that a cubic meter of one may weigh as much as 20,000 tons. It was also discovered that Sirius B orbits Sirius A in an elliptical orbit that takes 50 years to complete. Sirius B was finally photographed in 1970. 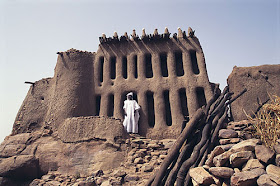 How did the Dogon know about Sirius B, when they had no telescopes? How, for that matter, did they know that Saturn has rings, that the moon is dry and barren, and that Jupiter has four large moons? These four moons of Jupiter are called Galilean, because Galileo was the first to see them when he pointed his telescope at Jupiter. The moons of Jupiter and Saturn's rings are only visible through a telescope. 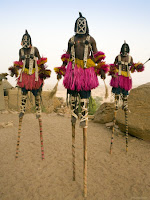 As Temple read Graiule's material on the Dogon, he found that their mythology traced their origins back to the Nommo, the human-fish creatures from their creation myths. Temple related these creatures to Oannes of Sumerian mythology who was also a half-fish, half-human creature who brought civilization to an ancient people. Further, Temple found links with Egyptian and Greek mythology. He wrote a book about his interpretation of the Dogon beliefs, called The Sirius Mystery

which was published in the 1970s. In the book, Temple contends that the Nommo were extraterrestrials who came to Earth from a planet in the Sirius system. They visited the Dogon, the Babylonians, and possibly the Egyptians, and the astronomical knowledge of the Dogon came from this contact. - bibliotecapleyades.ne

Here is a link referencing the Dogon culture and region in gallery for, - Dogon Culture / Region and a past auction of Dogon art - illustrations - Art of the Dogon

news.nationalgeographic.com
dogon1114121351.tribe.net
halexandria.org
sacredsites.com/africa
Sacred Symbols of the Dogon: The Key to Advanced Science in the Ancient Egyptian Hieroglyphs

bbc.co.uk
The Rise and Fall of the Nephilim: The Untold Story of Fallen Angels, Giants on the Earth, and Their Extraterrestrial Origins