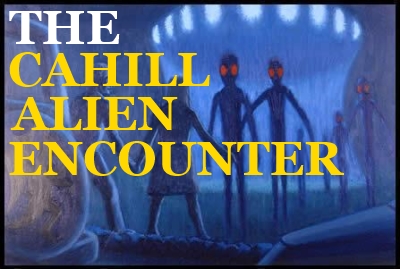 I've been looking over a few of the classic UFO encounter / abduction cases for updated information. This particular incident, for the most part, is one of the more descriptive alien abduction scenarios. As far as how much of it is believable...well, I'll leave that up to you. I have provided a few interesting links as well:

In August 1993, 27-year-old Kelly Cahill, her husband and three children were driving home after a visit to a friend's house.

Their routine journey would soon become a harrowing trip into an unknown world of strange beings that occupied space but were void of color as we know it. The Dandenong foothills, near Belgrave, Victoria, Australia would have its location forever linked to one of the most unusual sightings of a strange creature in Ufology archives.

After midnight, the Cahills were on their journey home when they first noticed the lights of a rounded craft with windows around it.

It silently hovered above the road. Different colored lights were clearly visible on the bottom of the object. The UFO was so close to the ground that Kelly thought she could see people through the window openings.

As she began screaming to her husband what she was seeing, the craft zoomed off to their left, disappearing as quickly as it had made itself known.

Continuing their drive home with a renewed interest in the sky, they suddenly came upon a light so bright they were practically blinded.

Shading her eyes from the intense light with her hands over her eyes, Kelly begged of her husband, "What are you going to do?" Her husband, now frightened to death by the glowing presence before them, replied, "I am going to keep on driving." Within what seemed only a second or two, Kelly was now very relaxed, suddenly calmed by the absence of the UFO.

The first words out of Kelly's mouth were, "What happened, did I blackout?" Her husband said nothing, as he had no answer to give his wife. He cautiously drove his family home.

Upon their safe arrival Kelly could smell a foul odor, like vomit, and she suddenly felt as though something was missing from their drive home. Something was missing... an hour or so of time had vanished from her and her family's life.

That night as Kelly undressed for bed, she noticed a strange triangular mark on her navel-a mark she had never seen before.

It must have been created early this every night. But how? And why? And most importantly, by whom? Kelly suffered from general malaise for the next two weeks, and was taken to the hospital on two occasions, one for severe stomach pain, and another for a uterine infection.

Walking Toward a Giant Craft:

Kelly would recall the object they had seen in a slightly different place than she first remembered. It was hovering in a gully, and the UFO was big. She estimated it at 150 feet in diameter.

She could also recall that when the object was first spotted, her husband had stopped the car, and both her and her husband had gotten out of the vehicle, and walked in the direction of the massive craft.

Not Having a Soul:

To their surprise, they noticed another car stopped on the side of the road. As they walked toward the craft, they saw a creature unlike either of them had ever seen before.

It was black, not a black color but black as if all matter was removed where its presence was. Kelly would later describe it as "not having a soul." Kelly's words for the alien were "void of color." The black alien entity was taller than an average man, about 7 feet tall, according to Kelly.

After being mesmerized by the sight of the being, she saw more of them. "Heaps of them" is how Kelly described them as she stared into the open field. The aliens were out there in the field, beneath the immense flying craft.

The beings seemed to congregate in small groups, and one group glided toward Kelly and her husband, covering a hundred yards in a mere few seconds. Another group was approaching the other car which sat motionless near the hovering craft.

Her great fear and dread would cause her to scream at the alien-looking entities to leave them alone. She remembered going unconscious, and then... she was back in their car. As strange as this encounter seems, it was not without corroboration.

The occupants in the other car would come forward and tell almost an exact story, a story of abduction, mind control, and embarrassing medical procedures.

This particular case is the only one to my knowledge to describe such a being, although there are some very strange aliens described in various accounts. We have no reason to discount the Cahill account, and it remains one of the best cases of alien abduction on record.

Kelly has gone on to write her own account of the experience and its difficult aftermath. In October 1994 John Auchettl and PRA, whose investigative thoroughness is to be commended, released a comprehensive report on the affair. In this emotionally explosive area it is easy for people to get caught up in less than satisfactory situations while they attempt to understand extraordinary experiences. I hope this event and the documentation that flows from it will be of some help to others in similar situations.

The victims of these experiences must not be unrealistically encouraged by advocates of an alien presence; nor, at the other extreme, should they be ridiculed by the sceptical among us. They should be helped to deal with their experiences, whether those experiences turn out to be prosaic or profound in origin. The second part of this report will review the PRA report and examine in detail the accounts of the other group of witnesses. It will also consider the physical evidence and provide reflections on the nature and meaning of this event.

It should be noted that the above "comment" in the 1994 IUR report was prepared on the assumption that the "PRA comprehensive report on the affair" was about to be released. Despite nearly a decade passing, John Auchettl and PRA have not released their report other than a few fragments of information.

As the researcher responsible for passing Kelly Cahill onto PRA in the first place, principally because I am NSW based and the incident occurred in Victoria, I have to say now that that decision was, in hindsight, a mistake.

My comment in my 1994 IUR report: "John Auchettl and PRA, whose investigative thoroughness is to be commended", was based entirely on conversations with Auchettl and discussions with Kelly Cahill at the time (1993-1994), and in retrospect should have been qualified more accurately. While Auchettl & PRA may well have been thorough in their investigation, in reality there has been no way to absolutely verify this, because of their unwillingness to release their report and data on the case. PRA have offered some seemingly unusual and convoluted explanations for this lack of sharing.

I have long encouraged openness and sharing in UFO research (my web site is in part an expression of my position on this matter). My attempts to encourage PRA in this direction, from my perspective, have been very disappointing, and have instead lead me to not to refer cases to John Auchettl and PRA. Unless PRA changes their apparent lack of transparency and openness, researchers and witnesses should carefully consider the wisdom of cooperating with Phenomena Research Australia (PRA). - Bill Chalker, International UFO Reporter

NOTE: UFO investigator Bill Chalker's full assessment of this case can be found at AN EXTRAORDINARY ENCOUNTER IN THE DANDENONG FOOTHILLS - Bill Chalker, International UFO Reporter, Sept/Oct 1994, Vol 19, No 5. Click for an in-depth video interview with Kelly Cahill. Another interesting account can be found here. Personally...I have a few problems with the Kelly Cahill case, not unlike some aspects of the Travis Walton abduction. I'm not going to go into detail...I'd rather the readers come to their own conclusions. Lon


Sources:
Hair of the Alien: DNA and Other Forensic Evidence of Alien Abductions

thenightsky.org
The Lure of the Edge: Scientific Passions, Religious Beliefs, and the Pursuit of UFOs

forteantimes.com
A World of UFOs