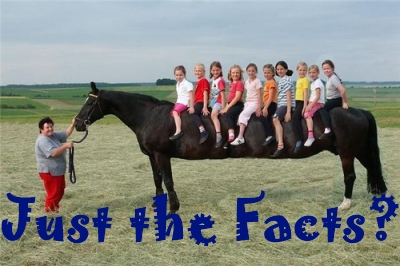 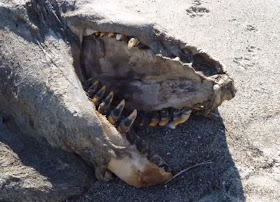 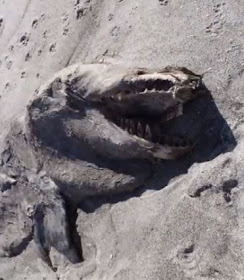 This is a slideshow of a series of photos taken at Pukehina Beach Bay of Plenty, New Zealand in Apr 13. The huge marine creature washed up after a storm. It had been attacked by something in the water. The locals are not sure what it is although it has stimulated lots of discussion.

The Cryptid Files: Pacific Giants: Mysteries and monsters from around the world

The Beasts that Hide from Man: Seeking the World's Last Undiscovered Animals

Use this link for LIVE updates of the CHD hearing

Ex-U.S. Rep. Carolyn Cheeks Kilpatrick of Detroit and six other former Congress members are presiding over hearings on the existence of extraterrestrials.

The 30 hours of congressional-style hearings kicked off Monday and are scheduled to run through Friday at the National Press Club in Washington, D.C.

Those testifying hope to prove that aliens contact Earth — and that the government is trying to keep it secret.

Kilpatrick tells The Detroit News she's been researching the topic and is "looking forward to the week's activities."

The News says Kilpatrick, who is being paid $20,000 plus expenses, will chair the panel on Tuesday.

Kilpatrick is a Democrat who served in Congress from 1997-2011. Her son, ex-Detroit Mayor Kwame Kilpatrick, is awaiting sentencing after being convicted on two dozen counts of corruption. - News Times

Oslo has got a problem a lot of cities would love to share: a major shortage of garbage. Around half of the Norwegian capital is heated by garbage-burning power plants, but with recycling rates very high, the plants simply can't get enough of the stuff, the New York Times finds. The city has been importing trash from as far away as Ireland, but it faces stiff competition from cities across northern Europe including Stockholm, which has persuaded some Norwegian towns to give it their garbage.

Northern Europe's incinerating plants have the capacity to handle more than 700 million tons of trash a year, but the region produces less than a quarter of that. New plants are still being built in Sweden, Germany, Austria, and the Netherlands, leaving the chief of Oslo's waste-to-energy agency wondering where all the trash is going to come from. "I’d like to take some from the United States," he says. "Sea transport is cheap." - Newser