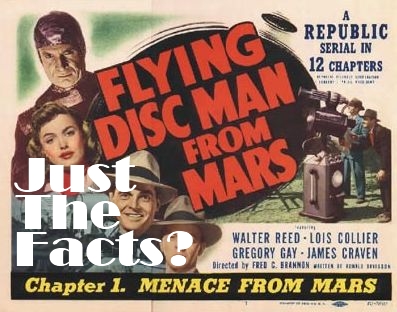 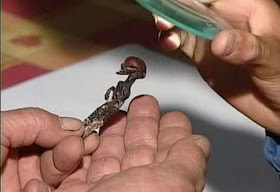 Professor Nolan concludes that Ata is a human with unknown genetic defects and mutations, although the markers for dwarfism are not present. He also adds that this is only a preliminary report and he intends to publish his findings in a peer reviewed journal later on. Anyway...I'm not sure what evidence Steven Greer has that this is an alien, unless he thinks that it was a hybrid of some type. 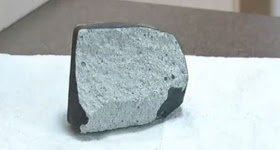 A Yale expert confirmed Tuesday that an object that crashed through a house in Wolcott Friday night was a meteorite.

Larry Beck, of Williams Court in Wolcott, called police at 10:20 a.m. on Saturday and said a rock crashed through the roof of his house on Friday night and damaged the roof and copper piping, and cracked the ceiling in his kitchen.

"All the sheet rock had broken apart and it was on the floor," Beck said.

That was around the time that people from several towns along the shoreline called police and reported a loud boom that rattled windows.

Beck told police that he’d heard a loud crash and thought that a joist or rafter had broken.

When he checked the attic on Saturday morning, he found a hole in his roof, damage to the pipes and rock broke in half in the attic, police said.

"As I'm crawling across, I say 'honey, I can see some daylight coming through the roof," Beck said.

At first, police thought the rock was a broken piece of airport runway concrete that had dropped from a plane when landing gear was being lowered, because Beck said that there is a lot of overhead airline traffic at all and Bradley Airport and Oxford Airports are nearby, police said.

Officials contacted the New England Regional Office of the Federal Aviation Administration and arrangements were made to have someone from the FAA view the rock.

Beck also contacted a local meteorolgist about the rock that crashed through his roof. John Bagioni, who owns Fax-Alert Weather Service, LLC in Burlington, immediately thought the rock might be a meteorite. The description of the rock, coupled with reports of a loud boom across the state around the time the rock struck the home, lead Bagioni to his conclusion.

On Monday, NBC Connecticut contacted police about the possibility of it being a meteorite and police said they were made aware that a meteor shower had taken place on Friday night.

Bagioni said he was called in to help check out the specimen and his opinion is that this appears to be a Chondrite meteorite.

After examining the object on Tuesday, Stefan Nicolescu, the collections manager for the Mineralogy Division at the Yale Peabody Museum confirmed it was in fact a meteorite.

We are toward the end of the Lyrids meteor shower, which happens every year between April 16 and April 26, when Earth crosses the orbit of comet Thatcher, according to Nicolescu.

The first recorded meteroite in the New World fell in Weston, Connecticut in 1807, according to the Peabocy Museum Web site.

There were reports of loud explosions from more than 40 miles away and fragments of stone fell in at least six places.

Hundreds of meteorites fall to earth each year, but only five to 10 were immediately recovered, according to the Peabody's Web site on Meteorites and Planetary Science.

Two meteorites also fell in Wethersfield, hitting two houses a mile and a half apart over an 11-year span. - NBC Connecticut

I received the following story from a reader:

I have had so many strange experiences and for the most part don't talk about them to my family since they would probably think I was nuts; but I know I'm not crazy. One comfort is that when I read and learn that other people have had the same kind of experience, it lets me know there is something to all these weird things. The one thing I was reading about tonight was shadow people. The first place I ever experienced them was when we lived in Maryland, in military housing. From what I could tell they would be about four feet tall, and slender in size. All that you can see of them is black, from head to foot and even the face would be covered in black. They would be fleeting shadows peering around corners and they moved quickly. I could never associate any kind of sound to them but I think they are simply mischievous and enjoy peeking around corners and liked getting your attention by sneaking around.

I read somewhere else about an experience that I also had in that same apartment. I would lie down after my husband and daughter left for work and school. But it would be difficult to sleep. In the apt. next door (the only other people in the building at the time were the people downstairs and they both worked.) I would hear what sounded like someone walking in heavy boots stomping around on the floor. At other times it sounded like high heels tapping on a wooden floor...it had that hollow sound that amplified the sound. When I would wake up and listen intently the sound would stop. If I tried to fall asleep I would be awakened by the loud clomping or the high heels tapping on the floor. It was all a bit unnerving. Whenever I would be sitting at my desk my dog would be looking at something high on the wall and just stare at it. I never felt alone there that's for sure.

Haunted: The Incredible True Story of a Canadian Family's Experience Living in a Haunted House

Housing authorities in northern France have agreed to move a family from their home, which they claim is haunted. They’ve witnessed oranges floating across the room, violent attacks by soap trays and earlier this month a member of the family was hospitalised after being hit by a flying chair at the house in the village of Mentque-Nortbécourt, Nord-Pas-de-Calais.

The family say that the strange happenings have been going on since last July. To prove they were not going mad they brought in others from the village, including the mayor, to witness the events. “It’s becoming dangerous,” the mother said. “My friend had to go to hospital this week after getting hit in the head by stones. It’s serious.”

Paramedics were called earlier this month after one member of the family said he was hit by a flying chair in his face and a soap tray on the back. The local diocese has sent in an exorcist to try to banish any troublemaking evil spirits that may reside in the home.

The ghostly goings-on became so bad that the family pleaded with authorities to move them to a new home. The family were initially given temporary lodging on a campsite, but currently have no fixed accommodation. The local council in the Nord-Pas-de-Calais region have told the father they are taking care of their case. - The Local

Unbelievable: Investigations into Ghosts, Poltergeists, Telepathy, and Other Unseen Phenomena, from the Duke Parapsychology Laboratory 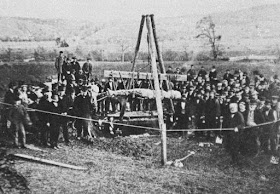 The Cardiff Giant was one of the most famous hoaxes in United States history. It was a 10-foot (3.0 m) tall purported "petrified man" uncovered on October 16, 1869, by workers digging a well behind the barn of William C. "Stub" Newell in Cardiff, New York. Both it and an unauthorized copy made by P.T. Barnum are still on display.

Ricky D. will never top this one...no matter how much attention he wants.

A Colossal Hoax: The Giant from Cardiff that Fooled America

The Mystery of the Cardiff Giant (Cover-to-Cover Informational Books)