Just the Facts?: In the News...Ricin -- Stephen Hawking & God -- What We Americans Believe 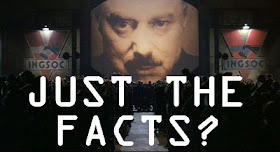 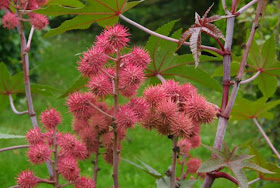 In the News: What is Ricin

This week, letters bound for the White House and the office of Mississippi Senator Roger Wicker were intercepted and found to be laced with ricin. There was an arrest today. Here’s what you need to know about the toxin everyone is talking about.

WHAT IS IT AND WHERE DOES IT COME FROM?

Like some other scary poisons, ricin is naturally occurring. It’s a protein found in Ricinus communis, the castor oil plant. It can be extracted from the waste materials (the “mash” or “bean meal”) left over from castor oil processing and turned into a powder, pellet, or mist.

WHAT DOES IT DO, AND HOW BAD IS IT?

Ricin kills cells by shutting down their ribosomal RNA, part of the molecular machine that builds their proteins. As the cells die, a ricin poisoning victim experiences different symptoms depending on how they were exposed, usually starting within 6 to 12 hours.

If the ricin was inhaled, the victim is in for difficulty breathing, chest pains, coughing, nausea, a buildup of fluid in the lungs, and respiratory failure. If the poison was ingested or injected, the victim can experience diarrhea, bloody vomit and urine, seizures, and failure of the kidneys, liver, spleen and/or heart. Death from organ failure follows within 36 to 72 hours of exposure, according to the Centers for Disease Control.

It doesn’t take much of the stuff to wreak this kind of havoc either. The lethal dose for an adult is around 0.35 to 0.7 milligrams by inhalation (less than the mass of a single grain of sand) and between 1 and 20 mg per kilogram of body weight by ingestion (1mg/kg is about what you’d ingest if you ate a small handful of castor beans).

YIKES. HOW DO YOU TREAT RICIN POISONING?

There’s no known antidote for ricin, so the best treatment is flushing it out of the body as quickly as possible while maintaining organ function and treating individual symptoms.

SCARY STUFF. WHAT IS IT GOOD FOR BESIDES TERRORIZING POLITICIANS?

Biomedical scientists have been experimenting with ricin as a cancer treatment for decades. The ricin protein is linked to an antibody to form an immunotoxin that attaches only to specific, targeted cells. Once the immunotoxin latches on to a cancer cell, the ricin does its thing.

Other than that, though, ricin is mainly for murder and mayhem. Maybe the most famous ricin victim was Georgi Markov, murdered in a scheme that seems right out of a spy novel. In 1978, the Bulgarian writer was waiting for a bus when he felt a stinging pain in the back of his leg. When he looked behind him, he saw a man with an umbrella. The man crossed the street, got in a cab and fled. Three days later, Markov was dead, murdered via a ricin-filled pellet injected into his leg by the modified umbrella. - Mental Floss

Ricin!: The Inside Story of the Terror Plot That Never Was

Stephen Hawking: So here's how it all happened without God

Even some of the more faithful might have wondered over the last few days whether there truly is a God.

Famed physicist Stephen Hawking would like to help. Let's imagine there isn't, seems to be his preference.

Indeed, in a speech at the California Institute of Technology in Pasadena, Calif., on Tuesday night, he made jokes about God's supposed power and omnipresence.

"What was God doing before the divine creation? Was he preparing hell for people who asked such questions?" asked Hawking, clearly not afraid of meeting a reddish man with a fork and a tail.

Being a scientist, Hawking has faith only in scientific explanations.

As NBC News reports, he discounted a repeating Big Bang Theory (even though he's appeared on the show).

Instead, he thinks: "We are the product of quantum fluctuations in the very early universe."

I certainly feel like the product of quantum fluctuations on many days of the week, don't you?

As Hawking advances in years, God is clearly very central in his mind. As the L.A. Times observed, Hawking was asked what, besides his wheelchair, he would like to control.

"What I would really like to control is not machines, but people," he said. Which, some might observe, sounds God-like -- in a remarkably ungodly way.

Still, he believes contemporary religions are so suspicious of science that they actively discourage it.

He pointed to the very charming Pope John Paul II who, he said, tried to get the pesky scientists to stop wondering how the world was created, as this was a holy event.

Rather than a Black Holey event.

In the end, though, we live in a world whose end we know no better than its beginning. We live in the middle of it and still don't know what's going on.

We neither understand ourselves very well, nor the reasons others behave as they do. We stand and we stare, as humanity shows its many hues and its infinite number of whys.

Somehow, God or not God, scientists' musings seem as fascinating as they are irrelevant to our everyday lives.

In this speech, Hawking was moved to muse: "God really does play dice."

Hawking is a gambler too. He lost a $100 bet as to whether the so-called God Particle would ever be discovered.

Nothing's going to keep us from searching, though, is it? It's the human condition. - CNET

A Briefer History of Time

The case alleging 'religious malpractice' is reportedly the first time there has been such an allegation made in a Romanian court.

The four priests had all tried and failed to exorcise the demons, according to the legal papers that named bishop Constantin Argatu, even though he had not been to the property, as he was in charge of the priests who had been there.

The case has already been rejected by a lower court in Romania and was rejected again this week by the Romanian High Court, but now the businessmen says he plans to go to the European Court of Human Rights.

He told the court: 'If they (the accused) represent the way of God then God's ways are crooked. They did not remove the demons that made these bad smells as they promised to do, and I still see all sorts of demons in the form of animals, usually crows but also other such things, that are making my life miserable.

'When I am at home they switch the TV on and off all the time, they make foul smells that give me headaches and basically roam unhindered around my house and my business.'

The man produced his mother to back up his claim saying that even the hair-dryer was possessed and a black shadow came out of it when anyone tried to use it - and she also said the fridge was infested by the flatulent demons that she confirmed left foul smells about the property.

But the lawyer for the Archdiocese from Arges, Anton Alin, rejected the allegation of fraud saying that the exorcism had been properly carried out and they believed the allegations of further demons and more bad smells were simply a product of the man's imagination.

An Exorcist's Field Guide: to Blessings, Consecrations and the Banishment of Malevolant Entities

What we Americans believe

Flying Serpents and Dragons: The Story of Mankind's Reptilian Past 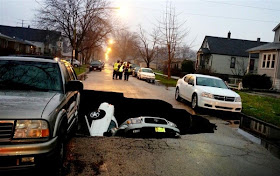 One person was hospitalized after a sinkhole swallowed three cars in the South Deering neighborhood on the Southeast Side this morning.

The person was taken to Northwestern Memorial Hospital in serious-to-critical condition, according to the Chicago Fire Department.

Witnesses said the hole opened up around 5 a.m. at 9600 South Houston Avenue, quickly growing from about 20 feet to about 40 feet. First two cars slid in, then a third as the hole widened, witnesses said. A fourth vehicle was towed from the edge as it was about to fall inside, witnesses said.

The man who was injured was trying to drive his car around the hole when the road gave way, according to witnesses. The man suffered minor head injuries.

Ola Oni said she was about to leave for work at 5 a.m. but had not gotten in her car yet when it suddenly fell into the hole.

"It could have happened to me, I am lucky, I'm happy," Oni said. "In this kind of neighborhood, I don't think this should happen."

She gestured toward the hole. "Look at this, this neighborhood is in danger."

The sinkhole opened up after a water main broke, according to Tom LaPorte, spokesman for the Water Department.

The heavy rain could have contributed to the break of the cast iron pipe that dates back to 1915, he said. Officials are looking at the age of the main as well as weather conditions. - Chicago Tribune
Lon Strickler at 12:22 PM
Share
‹
›
Home
View web version