Forgotten Humanoid & Other Encounters of the 'Roaring 20’s' - Part 2 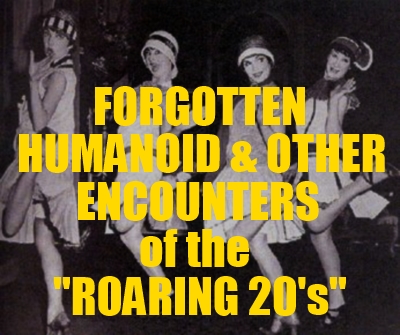 The following article was forwarded by long-time humanoid researcher and colleague Albert S. Rosales. The full narrative will be presented in three parts. Enjoy!

During those turbulent times in between the two World Wars, right before the Wall Street Crash and the beginning of the Depression, there were little known and mostly hidden encounters with ‘strangers’ among us.

For various reasons, probably because of witness reluctance and faltering memories, many of the encounters reported from 1920 through 1929 were mainly ignored and poorly documented. But there is a core of incidents that appear to mirror what was going to occur in the not too distant future. I will attempt to cover some of the least known incidents reported during the time, not only ‘humanoid’ encounters but other high-strangeness events:

According to Len Wells from the Evansville Courier there was another typical close encounter of the third kind one afternoon in June of 1923 near the town of Mount Erie Illinois, the witness being a 10-year old boy named Norman Massie, following is a summary of the incident:

Norman Massie was 10-year old when he went out to take his horses into a pasture. As he led his horses through the gate he noticed an object with lights all around it nearby. He walked to within 50 feet of the object and noticed five men onboard the craft. He described the men as about 4 ft tall with blond hair. As he got closer he could hear them talking. One of the men sat on a chair, & the others called him the “Commander”. The other men made trips back & forth into the object. Massie then overhead one of the men tell the commander that the repairs had been made. The object was described as metallic and standing on three legs. It had a dome on top with holes in it. The top of the object resembled melted glass. The object then rose up and hovered & the tripod legs telescoped up into the belly of the craft, which went straight up then shot away towards the west at high speed.

Several Spanish Ufologists including Antonio Ribera unearthed a very strange incident said to have occurred one afternoon in 1924 near the small town of Quero in La Mancha region, Spain. The incident involves a lone humanoid without the presence of a UFO but using some kind of ‘apparatus’ in order to get around: 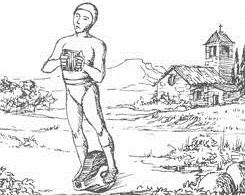 Depiction of humanoid maneuvering over a field


The witness was standing near a local rural church when he saw a short humanoid figure about 1.20 meters in height wearing a tight-fitting green colored coverall, it had its arms and legs in a rigid position and approached to within 2 meters of the witness. The humanoid seemed to have both feet together and resting on some type of circular platform that apparently propelled him above the ground. On his hands he carried an object or control panel that seemed to operate the floating platform. The humanoid, which had human features, disappeared silently into some distance fields.

The late and groundbreaking Ufologist John Keel (John Alva Kiehl) reported a bizarre possible crash & retrieval case which involved strange characters, perhaps precursors of the modern day M.I.B. The incident is said to have occurred one afternoon in May of 1924 near the small town of Gem, West Virginia:

A farmer outside Gem in monster haunted Braxton County reported seeing an ‘airplane’ crash in a forest. Planes were a very rare sight in those days especially in West Virginia, and a crashing plane was big news. According to the farmer, the plane was very odd in that it didn’t seem to have any wings, didn’t make any noise and seemed unusually large. “As big as a battleship” is the way the farmer described it. A party of men, including the local sheriff and local newsman John Cole systematically searched the woods. Within hours they found the wreck in a small clearing. According to Cole:

“We weren’t the first ones there, though. There were already five or six men in the clearing. Some of them were dressed in black business suits, neckties and all, and that seemed damned silly in that neck of the woods”. Others were dressed in coveralls of a funny color---some kind of very shiny material. They were talking among themselves in a rapid-fire foreign language when they found them. They got real excited when they saw the search party. The men in coveralls ran into the wreck---like they were trying to hide. Some of the men in the search party were carrying guns and one of them said to Cole, “By God, they’re spies!” and he raised his gun. The strangers were all small, just a little over five feet tall, and they all looked like Orientals, with high cheekbones, slanted eyes, and dark skin. One of them spoke English. He told the men nobody was hurt, that everything was all right. He said he would call on the sheriff later and make out a complete report. There wasn’t much they could do. No crime had been committed. Nobody was hurt.

According to Cole while he was looking around he spotted a ‘little thingamajig” on the ground. He picked it up and decided to keep it. He doesn’t know why he just didn’t turn it over to one of “foreigners”. He put it in his pocket. They all finally went away, leaving the foreigners to fuss with their contraption. It didn’t look like much of a flying machine. It face, Cole didn’t think it could fly at all. It was like a fuselage of a modern plane, with windows and all. But it didn’t have any wings, tail or propellers. And like the farmer said, it was mighty big. According to Cole at least seventy five feet long, it filled the whole clearing.

He went back home in Weston and went right to bed. He was pretty tired from all the day’s hiking. About three a. m. somebody started pounding on his door. He got up and looked and there was an army officer standing there. He was dressed in one of those broad-brimmed hats they used to wear, with those leg wrappings and all. It was a U.S. Army uniform, but except for his clothes he looked just like those foreigners from the airplane. Slant eye, dark skin, but he was maybe a little taller. ‘You picked up something today,’ he said. ‘We need it back.’ Cole was half asleep and at first he couldn’t think what he meant. Then he remembered the metal ‘thingamajig” It was still in his coat pocket. Cole went and got it. “Is this what you mean?” He asked him. He didn’t answer; he just grabbed it and walked off without a word. He didn’t, seem to have a horse or a car. Cole shuffled back to bed. But the next day he started wondering about it. How had the supposed officer managed to track him down? A couple of days later he went back to those woods and found that clearing. It was empty. The grass and bushes were all crushed down where the airplane had been but there was no other sign of anything or anybody. After the Army ‘officer’ came by Cole figured that maybe it was a secret Army deal of some kind and he thought it was better to leave it alone.

Another report describing a ‘little man’ carrying a sort of stick was reported by author and researcher Graham J. McEwan in his book Mystery Animals of Britain and Ireland

said to have occurred in Cranagh, County Carlow, Ireland one afternoon in November of 1924. The following is a summary of the events:

A young girl was standing by a farmyard gate tending some cows when she saw a little man appear from behind one of the cows. He walked quickly and tapped one of the cows gently on the nose with a stick he was carrying. He walked by the witness, staring at her, and then walked straight into a bank of solid earth and vanished. He was described as four foot tall, young looking, & wearing a black cap, a red coat, and tight trousers. 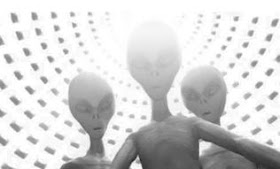 According to the Canadian UFO flyer "Cuforn Bulletin May-June 1988" an apparent early abduction incident was reported from Port Burwell, Ontario, Canada one night during the summer of 1925:

The five-year old witness woke up and felt compelled to go outside into the backyard; she then saw a large “train-like” craft approaching. It was emitting a loud whining sound. A light approached the witness and she recalled floating up into the craft. Several small gray beings with large eyes, set far apart took her gown off. The beings were slender with whitish gray skin, large heads, and bulging eyes and were wearing tight fitting satin like outfits. She is later floated up and apparently examined with various instruments. She is eventually released.

This is an apparent very early abduction event describing what appeared to be the typical modern day ‘gray’ humanoids. Later that same summer the same witness reported another similar incident at the same location but involving somewhat different appearing beings:

The witness was lying on the grass outside when she saw a flat silvery disc land nearby; several beings with wrinkled yellow skin came out. She was then apparently taken inside the craft and given a ride. The disc flew at a very high altitude and the witness was returned later.

According to the Swedish UFO publication UFO-Aktuellt 3/1983 page 39, sometime between September 20 through September 30, 1925, between 6:00 a.m. and 6:30 a.m. a strange encounter which I classified as of high strangeness, occurred, the following is the summary of the event:

On an early Sunday morning the 8-year old witness had gotten up and gotten up and gone out into the surrounding area near his home when he found himself in a small country lane. He had no definite goal. It was already bright and the weather was fine. When he came down to a bridge that crossed a creek he looked up out over the area and saw something reminiscent of two deep saucers facing each other. This phenomenon was big as a car and blackish gray in color, stood on four legs in a field, which a few days earlier had been harvested for potatoes.

He doesn’t know how long he watched the strange object when he saw something that looked like a rope ladder being hauled into a gap in the craft, the legs were retracted and the ring that went around the object began rotating around faster and faster, and the craft rose slowly to the side with a faint whirring noise. He did not see any living creatures. He was then seized by a strange fear and felt uncomfortable. He ran quickly home and told his parents what he had seen, but was met with skepticism. He also spoke about it to his best friend and her mother but was ridiculed.

The rope ladder hanging down from an open hatch implies that there were apparently entities inside the object either getting ready to exit when interrupted by the witness or just returning to their craft.

Of course there were many other encounters and strange encounters during the roaring 20’s, I could not have possibly include them all, I hope I was able to chose the most interesting and perplexing cases. The fact is that whoever or whatever this entities are, they have been with us for decades before the so-called modern era of encounters in June 24, 1947. Many of these ‘ancient’ or like some like to say, ‘pre-Arnold’ cases are mirror images of modern cases and were mere glimpses of things to come. Please feel free to contact me at garuda79@att.net for additional information or questions.


The Cryptoterrestrials: A Meditation on Indigenous Humanoids and the Aliens Among Us

Flying Saucers 101: Everything You Ever Wanted To Know About UFOs and Alien Beings

Alien Dawn: A Classic Investigation into the Contact Experience