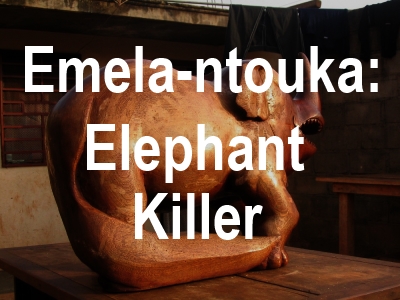 In the area of the Congo which is the supposed home to the cryptid Mokele-bembe, another unknown beast has surfaced. The locals called refer to it by various names, with Emela-ntouka being one of the most common. The cryptid seems to be an amphibious rhinoceros-like creature and is reputed to have killed elephants and hippopotami with its long single horn, even though native informants state it is an herbivore.

In December 1919, the London Daily Mail published a letter from C.G. James, who had lived in the Congo. He reported that an enormous beast with a single ivory horn lived in the waters of Lakes Bangweulu, Mweru, and Tanganyika, as well as the Kafue swamps. James said this animal was called Chipekwe by the natives, and that it was reputed to leave tracks similar to, but different than, those of a hippopotamus. The Chipekwe was also mentioned in Far away up the Nile

a book written in 1924 by John G. Millais. According to Millais, a hunter named Denis Lyall corroborated James' statement, although he added that the animal seemed to be extinct in those lakes.

These statements were further corroborated by J.E. Hughes in 1933. His book Eighteen Years on Lake Bangweulu reports the the Wa-Ushi tribesmen had killed such a creature along the Luapula River, between Lakes Mweru and Bangweulu.

It is described as having a smooth body, without bristles, and armed with a single smooth horn fixed like that of a rhinoceros, but composed of smooth white ivory, very highly polished. It is a pity they did not keep it...

The natives near Lake Edward, Zaire, call this creature Irizima. Although this name is confused at times with the Mokele-mbembe and analogous creatures, it usually refers to "...a gigantic hippopotamus with the horns [sic] of a rhinoceros on its head." Clearly, it is describing a creature identical to the Chipekwe. 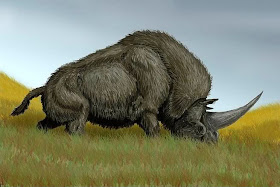 The name Emela-ntouka is used specifically by natives in the Likouala region of the Congo. The animal is mentioned in a 1954 article in the journal Mammalia. The article's author, Lucien Blancou, was a former game inspector in Likouala. He reported that a "beast which sometimes disembowels elephants" had been reported from several localities, among them Epena, Impfondo, and Dongou. At Dongou, he said, one of these animals was supposedly killed some two decades before, or about 1934.

Later evidence was contributed by Dr. Roy P. Mackal, who led two expeditions into the Congo in 1980 and 1981. He gathered details on various other cryptids. Mackal initially considered that Emela-ntouka might be a Monoclonius, or a Centrosaurus, both ceratopsians. As such, it might be related to the Ngoubou, which might be a six-horned Styracosaurus. However, Mackal also noted the pygmies did not report a neck frill, which he would have expected on a ceratopsian. Furthermore, the Ceratopsia are absent from Africa's fossil record.

A Living Dinosaur: In Search of Mokele-Mbembe

Another description of the Emela-ntouka from Encyclopedia of Cryptozoology: A Global Guide to Hidden Animals and Their Pursuers

It has four sturdy legs, grayish, hairless skin, and is probably just a little bit bigger than an elephant. It has a single large white horn in the center of its forehead or nose. It swims through the water with a powerful tail shaped like that of a crocodile. Its name comes from its aggressive habits. Though it eats only plants, it is so irritable that it will attack other large animals and kill them. 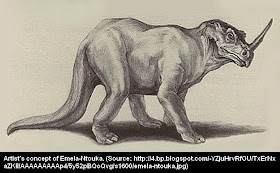 Etymology: Bomitaba (Bantu), “killer of elephants” or “eater of the tops of the palms.”

Behavior: Amphibious. Foul-tempered. Snorts, howls, and roars. Feeds on a wide variety of leaves, including the Malombo liana (like the Mokele-Mbembe). Disembowels elephants, buffalos, and hippopotamuses with its horn.

Significant sightings: In 1913, Hans Schomburgk heard stories from the Klao tribe about a small rhinoceros that lived in the mountains of Liberia.

In 1950, a French official named Millet, stationed at Kellé in the Republic of the Congo, heard of a rhinoceros that lived in the forests.

Inhabitants of the district drew sketches of its footprint, which resembled that of a rhinoceros.

In August or September 1966, Atelier Yvan Ridel photographed some 10-inch-wide, threetoed footprints along a riverbank northeast of Loubomo, Republic of the Congo.

Roy Mackal collected information on the Emela-ntouka during his expeditions to the Congo in 1980 and 1981, noting that lore about the animal is often confused with that of the Mokele-Mbembe.

(1) A semiaquatic rhinoceros that inhabits the rain forest, suggested by Lucien Blancou, though the large tail argues against it. A semiaquatic fossil rhino named Teleoceras is known from 17–5 million years ago in Late Miocene river and lake sediments of North America. It was hippolike, with short limbs, a massive body, and high-crowned teeth.

(2) Roy Mackal has proposed a surviving ceratopsian dinosaur like Monoclonius, a quadrupedal herbivore about 18 feet long with a backwardly curved nose horn and a bony neck frill. Monoclonius fossils have been found in Montana and Alberta and date from the Late Cretaceous, about 70 million years ago. However, no ceratopsians are known from Africa. Also, they were egglaying dinosaurs, and no reports of the Emela-ntouka describe it as oviparous.

(3) The elephant-sized Elasmotherium was a Pleistocene rhino with a 7-foot horn in the center of its forehead. It is known from grasslands in Europe, Siberia, and China.

Video - What Explains the Emela-Ntouka and Other Living Dinosaurs?

cryptomundo.com
Cryptozoology A To Z: The Encyclopedia of Loch Monsters, Sasquatch, Chupacabras, and Other Authentic Mysteries of Nature