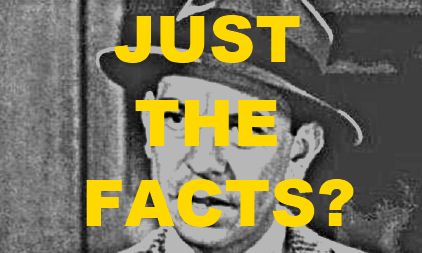 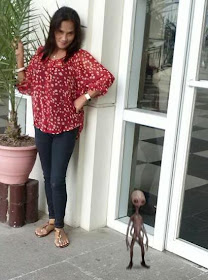 An employee of the Bacolod City Treasurer’s Office was surprised to see a 2-feet tall figure that looked like an extra terrestrial creature standing beside her in her photo taken by a fellow city employee in front of the Bacolod City Government Center at about 4 p.m. yesterday.

The employee, identified as a certain “Emily Santodelsis,” had requested her co-worker, Arian Ponce, to take a solo picture of her using her cellphone. When she looked at the photo later she saw a strange looking creature that looked like an alien from outer space standing beside her.

In another photo of Santodelsis taken on the same day there appeared a streak that looked as if she was being hit by lightning in the head.

One of her co-workers prayed over her after the experience because she was scared and shaken by what she saw on her cellphone.

Several personnel of the Public Order and Safety Office, who were on duty to secure the vicinity of the government center for the arrival of the Israeli Ambassador to the Philippines, as well as other city employees who were preparing to go home, saw Emily while her picture was being taken but did not see any creature beside her.

Some employees have claimed that they had seen about four of these “extra terrestrial beings” in the area. - Visayan Daily Star

The 'Inspiration Mars' mission planned for 2018

The first humans to visit Mars could be a married couple, after organisers of an ambitious manned mission to the Red Planet said that only a “tried and tested” male-female partnership could cope with the close confinement of a return trip.

Dennis Tito, the multi-millionaire financier and former rocket scientist behind the planned 2018 mission, said he was confident of raising the estimated $1.5bn to $2bn (£1bn- £1.3bn) needed to send a two-person mixed crew to Mars – but admitted that the total funding has yet to be found.

Mr Tito, who once worked for Nasa, promised to fund the Inspiration Mars mission for the next two years, and will ask other wealthy individuals and charitable foundations to contribute to the final cost of building and launching the manned space craft.

In addition to charitable and personal donations, Mr Tito said that he expected to raise money from television and media rights. The choice of a mixed crew of one man and one woman would heighten media interest, he said.

The privately-funded mission has signed a “space act” agreement with Nasa. A wide range of industrial partners has already approached the group with the hope of collaborating.

Selecting the man and woman who will become the first people to journey beyond the Moon will be a lengthy and complicated process.

“The requirements are going to be so high. It’s going to be quite a crew-selection process,” Mr Tito said.

The Spartan nature of the crew’s journey is outlined in a scientific paper to be presented this weekend by Mr Tito to an aerospace conference in Montana. There will be no luxuries or privacy, with both crew members expected to share the same small space for eating, sleeping and toileting.

“The journey is treated as a high-risk mission, which drives towards reliable – but minimalist – accommodations and provisions… that would meet only basic human needs to support metabolic requirements and limited crew comfort allowances,” the feasibility study says.

Jane Poynter of Paragon Space Development, who is an adviser on the mission, said that the man and the woman would have to be in a stable relationship.

“The idea of a man and woman going on this mission is an important idea. It’s important also that they are a tried-and-trusted couple,” Dr Poynter said.

Each crew member will be psychologically profiled so that they are able to endure the long return journey together, with no prospect of an emergency abort procedure if things go wrong.

The fact that the two crew members will share the same living space for 501 days suggests that the man and woman will have to know each other intimately before the mission.

The feasibility study points out that a man and a woman working and living together may be better than two people of the same sex.

A key aspect of the mission will be trust between the crew and mission control, which must be staffed by people who are sensitive to the psychological needs of the two astronauts.

The plan is for the two crew members to spend an extended period of time living and working together before the mission begins. “Experience has shown that it is extremely difficult to train, select and evaluate a crew team without those individuals having had experience living and working in an isolated confined environment for an extended period of time, preferable for the full mission duration, but for at least six months,” the study says.

“Working on this mission will also be a means to train the skilled workforce needed for the future manned Mars mission…. Sending humans on an expedition to Mars will be a defining event for humanity as well as an inspiration to our youth,” it says.

“Social media provides an opportunity for people to meaningfully participate in the mission, likely making this the most engaging human endeavour in modern history,” it concludes. - Independent

An Australian billionaire is getting ready to build a new version of the Titanic that could set sail in late 2016.

Clive Palmer unveiled blueprints for the famously doomed ship's namesake Tuesday at the Intrepid Sea, Air and Space Museum in New York. He said construction is scheduled to start soon in China.

Palmer said 40,000 people have expressed interest in tickets for the maiden voyage, taking the original course from Southampton, England, to New York. He said people are inspired by his quest to replicate one of the most famous vessels in history.

"We all live on this planet, we all breathe the same air and, of course, the Titanic is about the things we've got in common," he said. "It links three continents."

The original Titanic was the world's largest and most luxurious ocean liner when it hit an iceberg in the North Atlantic and sank on April 15, 1912. Only 700 people of the more than 2,200 on board survived the most famous maritime disaster in history, partly because there were not enough lifeboats to carry everyone.

Palmer said an unknown when the original ship sailed — climate change — may play into a positive for the new ship's fate.

"One of the benefits of global warming is there hasn't been as many icebergs in the North Atlantic these days," Palmer said.

Passengers on board the replica will dress in the fashion of that period and eat dishes from the original menu, in dining rooms copied from the ill-fated predecessor.

Joining Palmer on Tuesday was Helen Benziger, the great granddaughter of Titanic survivor Margaret "Molly" Brown. Benziger, who agreed to serve on the advisory board for the Titanic II, said her great grandmother, who died in 1932, would have loved to see the Titanic rebuilt and complete the journey it never got to finish.

In what some may consider a temptation of fate for a remake of a notoriously "unsinkable" ship that sank, a representative of the Finnish designer of the Titanic II said it will be the "safest cruise ship in the world."

Markku Kanerva, director of sales for marine design company Deltamarin said that while the vessel is modeled after the legendary liner — the diesel-powered ship will even have four decorative smoke stacks mimicking the coal-powered originals — it will meet modern navigation and safety requirements.

In addition, plans call for a new "safety deck" featuring state-of-the-art lifeboats, safety chutes and slides. The new ship will also have amenities unknown a century ago, like air conditioning.

Palmer, who is funding construction of the ship himself, built his fortune in real estate and coal. Australia's BRW magazine estimated his net worth last year at $4 billion, although Forbes puts it at $895 million.

"I want to spend the money I've got before I die," he said. "You might as well spend it, not leave it to the kids to spend, there will be enough left for them anyway." - Xfinity

Shadow of the Titanic: The Extraordinary Stories of Those Who Survived

A Night to Remember 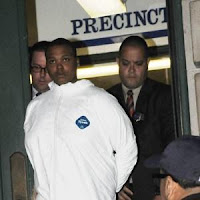 The twisted Bronx man who allegedly killed his mother and chopped up her body reveled in the slaying by snapping a picture of himself holding her severed head, sources told The Post yesterday.

Bahsid McLean, 23, pulled out a cellphone camera, posed in front of a bathroom mirror and snapped the gruesome photo of himself smirking while holding his mother’s head under his arm like a trophy, the sources said.

Then McLean and a buddy stuffed his mom’s head in a bag, packed away the rest of her mutilated body, and dumped the parts with the neighborhood trash — in several locations, cops said.

One of the four bags holding the remains of Tanya Byrd, 45, a home health aide and devoted mother of three, was found in Morrisania early Tuesday morning by a father and son walking their dog.

Her body parts were wrapped in plastic, with some stuffed in luggage, cops said.

Detectives were already disgusted by details of the case: the brutal bedroom stabbing, the blood drained in the bathroom, and the body hacked with a brand-new power saw.

“He’s definitely sick,” a law-enforcement source said. “It’s a ghoulish act. This guy is so mentally defective to do that. That’s pretty outrageous. That’s hardcore s--t.”

Surveillance video picked up the two men in a Third Avenue hardware store in The Bronx, where they bought a power saw with cash, sources said.

A blade and a box were found in the apartment McLean shared with his mother; the saw was found in Harris’ home, sources said.

McLean was charged last night with second-degree murder, police said. Both men were charged with hindering prosecution and unlawful dissection of a human body. They blamed each other for Byrd’s death.

Cops said McLean killed Byrd because she “wanted him to grow up and move out and be a man.” - NY Post

Serial Killers and Mass Murderers: Profiles of the World's Most Barbaric Criminals

Serial Killers: The Method and Madness of Monsters