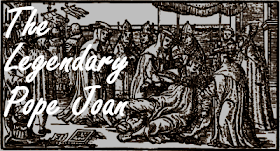 Pope Joan, legendary female pontiff who supposedly reigned, under the title of John VIII, for slightly more than 25 months, from 855 to 858, between the pontificates of Leo IV (847–855) and Benedict III (855–858). According to legend, her identity was exposed when, riding one day from St. Peter's to the Lateran, she stopped by the side of the road and, to the astonishment of everyone, gave birth to a child.

The legend is unconfirmed. Skeptics note that the first references to Pope Joan only appear hundreds of years after her supposed reign. However, supporters argue that the Church may have attempted to erase all evidence of her existence from the historical record. 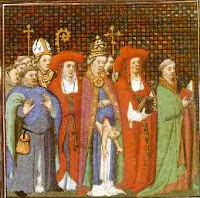 Pope Joan was said to have been born an Englishwoman. She concealed her gender to pursue her scholarly ambitions -- the life of a scholar not being allowed to a woman at that time. Calling herself John Anglicus, she travelled to Athens where she gained a reputation for her knowledge of the sciences. Eventually she came to lecture at the Trivium in Rome where her fame grew even larger. Still disguised as a man, she became a Cardinal, and when Pope Leo IV died in 853 ad was unanimously elected pope.

As Pope John VIII she ruled for two years. However, while riding one day from St. Peter's to the Lateran, she had to stop by the side of the road and supposedly gave birth to a child. According to one legend, upon discovering the Pope's true gender, the people of Rome tied her feet together and dragged her behind a horse while stoning her, until she died. Another legend has it that she was sent to a faraway convent to repent her sins and that the child she bore grew up to become the Bishop of Ostia.

So...is the story true? The earliest mention of the female pope appears in the Dominican Jean de Mailly's chronicle of Metz, Chronica Universalis Mettensis, written in the early 13th century. In his telling, the female pope is not named, and the events are set in 1099. According to Jean:

Concerning a certain Pope or rather female Pope, who is not set down in the list of Popes or Bishops of Rome, because she was a woman who disguised herself as a man and became, by her character and talents, a curial secretary, then a Cardinal and finally Pope. One day, while mounting a horse, she gave birth to a child. Immediately, by Roman justice, she was bound by the feet to a horse's tail and dragged and stoned by the people for half a league, and, where she died, there she was buried, and at the place is written: 'Petre, Pater Patrum, Papisse Prodito Partum' [Oh Peter, Father of Fathers, Betray the childbearing of the woman Pope]. At the same time, the four-day fast called the "fast of the female Pope" was first established"
—Jean de Mailly, Chronica Universalis Mettensis 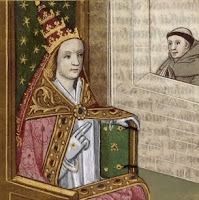 The Catholic Church at first seemed to accept the reality of Pope Joan. Marginal notes in a fifteenth century document refer to a statue called "The Woman Pope with Her Child" that was supposedly erected near the Lateran. There was also a rumor that, as a result of Pope Joan, for many years the chairs used during papal consecrations had holes in their seats, so that an official check of the pope's gender could be performed.

During the Reformation in the sixteenth century, the Catholic Church began to deny the existence of Pope Joan. However, at the same time, Protestant writers insisted on her reality, primarily because the existence of a female pope was a convenient piece of anti-Catholic propaganda.

The modern Catholic Church and many scholars dismiss the story of Pope Joan as a sort of Dark Ages urban legend.

Valerie Hotchkiss, a professor of medieval studies at Southern Methodist University in Texas, says that the story of Pope Joan was actually added to Martin Polonus' manuscript after he died.

"So he didn't write it, but it was put in very soon after his death, like around 1280 to 1290," says Hotchkiss. "And everyone picks it up from Martin Polonus."

Medieval monks were like copy machines, say some scholars, simply replicating mistakes into the historical record.

"And they're picking it up from each other and changing it and embellishing it," Hotchkiss says.

Monsignor Charles Burns, the former head of the Vatican secret archives, says the story intrigued people in the Middle Ages just as it intrigues people today. "This was almost like an Agatha Christie," he says, referring to the classic mystery writer.

Burns says there is no evidence and no documentation in the secret archives that Pope Joan existed, no relic of Pope John Anglicus anywhere.

And disbelievers can explain away the other clues. The Bernini sculptures were modeled after the niece of the pope; the Vicus Papissa was named for a woman who lived in the area. 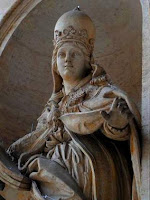 "Joan's absence from contemporary church records is only to be expected. The Roman clergymen of the day, appalled by the great deception visited upon them, would have gone to great lengths to bury all written reports of the embarrassing episode," argues American writer Donna Woolfolk Cross, author of the controversial novel, Pope Joan: A Novel

"The Dark Ages really were the dark ages," said Peter Stanford, a former editor of the Catholic Herald and the author of The She Pope: a quest for the truth behind the mystery of Pope Joan

"There is absolutely no certainty about who the popes of the ninth century were. We have to rely instead on medieval chronicles, written hundreds of years later.

"It's perfectly feasible that Joan existed. A monk's cowl is baggy and well suited to covering up a woman's body. We know that some women bound their breasts and cut their hair to pass themselves off as men." He dismisses the Catholic line that the story of Pope Joan was the product of Protestant black propaganda.

"That is categorically not true. There are plenty of pre-Reformation Catholic texts which mention Pope Joan. They were written by bishops, archbishops – even a secretary to a pope. "They all accept that she existed. The Catholic Church was embarrassed by the story and just erased it from the records, sometimes very crudely."

NOTE: This is just one of many religious mysteries that fascinate me. Though this allegory offers little to those interested in reading about the strange and unexplained, it still presents a look into the paradox of human belief in divinity...Lon

womenshistory.about.com
beliefnet.com
Scribe - The Story of the Only Female Pope

usnews.com
biography.com
The Female Pope: The Mystery of Pope Joan: The First Complete Documentation of the Facts behind the Legend