Reader Submission: 'I was attacked by a Reptilian' 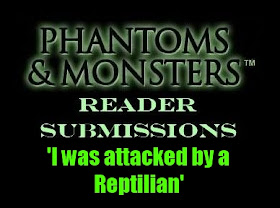 The following is an unedited report from Great Britain a few years ago:

I awoke one night in a state of which I can only explain as a spasm, my body was in a rigid state. I could not move a muscle and felt like something was on top of me.

I fought to get movement back in my body. I could not turn my head or move at all. It was like I was having a fight to get control of my body.

After a few panic stricken moments, I could just barely move my fingers, only a little bit. I then felt that there was more than just a spasm. I felt dirty and touched. It was a horrible feeling from deep inside me.

I could barely move my toes, again very slightly. My throat felt like it was being held. I could feel something was on top of me. My hands where by my side, but it felt like they were around my own throat, holding tightly. I was using all my might to break free from this spasmodic state.

Then could feel something breathing into my left ear, a sound of a growl-like noise right next to my ear. I struggled to move my head to the left, like breaking free from a strangle hold.

I could barely see the outline of a head, a big long head next to my own face. As the spasm-like feeling started to wear off, a tiny bit at a time, I could work out that this thing on top of me looked like a lizard/newt thing. It was like a blending together of all that was around it, or maybe invisible. I'm not very sure which, but I could see it clearly as the seconds passed on.

It was reptilian. I growled at it, or I think I did. My mind and my body gave all it could to do so. I bared my teeth at it and I could feel it could read my mind. I was swearing at it and shouting all sorts of obscenities at it. I felt violated and used.

The next thing, it was quickly off of me and was standing to one side of the bottom of my bunk bed. A light came through the thin gap in the curtains. There were different shades of a golden light which also had very small particles inside it, like dust or small stars which moved around like little bright lights.

This reptilian creature was about 6 feet tall. I could sense it was either proud or happy with itself, maybe both. I tried to sit up as best I could and through my mind I swore at it again.

After it was gone I felt relaxed, but I could still feel where I was held around my throat. I felt I was raped by this horrendous monster.

I awoke to a bright sunny day. I could hear my mother downstairs, washing up and doing housework. I laid in my bed and didn't move a muscle. I ran the incident through my mind again and, yes, I could still feel where I was held around my throat.

I know this happened. My mind, heart and soul knows that this happened. For the life of me, I could not run downstairs to explain to my mother about this. Who would have believed it? How would my parents have handled such a thing? I did not know what to do?

Since that night, my stepfather passed away. I asked my mother if she believed in aliens or ufo's. She replied that my stepfather said once that he saw a ufo near Brighton while at sea in the 1960's and he swore that it was a ufo, but only told my mother this.

I never told my mother about my experience, as I thought it would be to harrowing for her to hear.

What do I do about my experience? I would love to do something about it. It may help somebody, as I am being very honest. Things like this should be disclosed. An answer has to be found on why this is happening. - Name Withheld

A New Order of the Ages: A Metaphysical Blueprint of Reality and an Exposé on Powerful Reptilian/Aryan Bloodlines Volume 2

The Rise and Fall of the Nephilim: The Untold Story of Fallen Angels, Giants on the Earth, and Their Extraterrestrial Origins