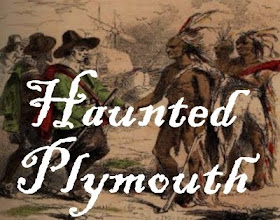 Thanksgiving Day is only a week away. In 1621, the Plymouth colonists and Wampanoag Indians shared an autumn harvest feast that is acknowledged today as one of the first Thanksgiving celebrations in the colonies. For more than two centuries, days of thanksgiving were celebrated by individual colonies and states. It wasn't until 1863, in the midst of the Civil War, that President Abraham Lincoln proclaimed a national Thanksgiving Day to be held each November. Since the season is upon us, I thought I'd dig up a bit of paranormal lore from 'America's Hometown'...Plymouth, Massachusetts. 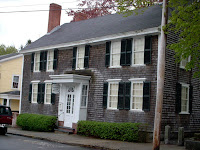 In August of 2005, a group of workmen were hired to do repairs at the Spooner House in Plymouth, Massachusetts and upon arriving, knocked at the door. A little girl in colonial period costume opened it, which surprised no one as the more than 262 year-old house has been a museum for over 50 years. They got busy with their task, and soon along comes the curator, who curious, asks how they got in. The foreman shrugs and says the little girl let them in.

“What little girl,” the curator asked. The workmen led the curator to the room which the little girl had entered, only to find it, as well as the rest of the house, empty. The workmen, not used to encountering ghosts in broad daylight, packed it in and left.

By all accounts, the ghost of Abigail Townsend is a friendly little spirit, and shouldn’t frighten anyone. Abigail was a tiny thing when the Spooner family took her into the family home in the mid 18th century. The house itself, is one of the oldest houses on one of the oldest streets in America. Built about 1749 on North Street, just one street over from Leyden Street, where according to tradition the pilgrims built their settlement, five generations of Spooners called the two story house their home. Originally constructed for the widow Hannah Jackson, the first Spooner to take up residence was a successful business man and patriot of the American revolution, Deacon Ephraim Spooner. It stayed in the family until the death of James Spooner in 1954. It was James who willed the house and all its furnishings to be turned into a museum. Today it contains over 200 years of original furnishing, giving one a sense of how life has changed, or perhaps how little life has changed in Plymouth over the past two centuries.

And perhaps it’s haunted by James as well. Music has been heard coming from the house when it was quite empty, and James was well-known as a patron of the musical arts. But alas, it’s the creepy little kid ghosts that get all the publicity, and so the music is attributed to Abigail. Though when you think of it, that makes no sense at all, as it’s unlikely an eight year-old girl could have been very musical, and there were no stereos in the 18th century.

Abigail fell victim to a tooth infection, dying in an upstairs room of the Spooner House. There was no penicillin in those days, the infection spread and there was nothing to do about it, but try to comfort the little girl in what must have been an agonizing death.

Since then she’s been seen periodically, peering from the windows, rustling the bushes along the alley, even occasionally standing at the corner of the house. But more recently she’s seem to have become more active. Or perhaps the stories just get more publicity.

According to a local historian, a woman who used to live next door to the Spooner House awoke in the middle of the night to find Abigail standing at the foot of her bed. - gothichorrorstories.com 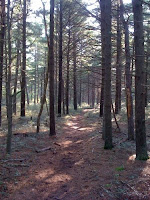 I have some personal history with this location. I was on a school trip to Plymouth and Carver, MA during my senior year in high school in May 1976. A few of us decided to drive out to the park one evening. Frankly, it is one of the eeriest places I have ever been. I could just feel the spirit activity everywhere I turned. In fact, it was so bad I had to leave earlier than the group...there was a true bad vibration in the area. This was a year before the Ruth Masters murder.

Myles Standish was a pilgrim who came to Plymouth on the Mayflower in 1620. He was known for building a fort in Plymouth, leading the attacks on the Native Americans, and starting trading with various tribes. He kept Plymouth in defense and enforced the law throughout the colony. He went on trips back to England to trade goods to bring back to Plymouth. Some time in the 1630s, he founded Duxbury, a town not far from Plymouth. The haunting in Myles Standish State Forest includes an old abandoned mental hospital that is located somewhere deep in the forest. In another part of the woods lies a lot where murders took place in the 1970s. Not a lot is said about the abandoned hospital; as for the murders, on May 14, 1977, according to the Plymouth Police Department records, a man murdered Ruth Masters (née Ruth Rydberg) while she was riding her bike alone on an isolated trail in the park.

Wayne Masters and his wife Ruth were at Myles Standish State Forest, in Plymouth Mass., for a day of bicycle riding. While riding alone, on an isolated trail, Ruth Masters was attacked by Eric H. Anderson and killed.

Ruth Master was knocked unconsious with a rifle, her throat was cut and her body was mutilated. The case went cold and remained unsolved.

In Oct 1977 a woman was assaulted at knifepoint in neighboring Kingston Mass. Eric H. Anderson Jr. confesses to this attack. The attack reminds investigations of the Masters’s unsolved case.

In 1994 Massachusetts State Police and Plymouth Police Department reopened the investigation. While re-examining the case file, police discover a statement from two witnesses from the park the day of Masters’s murder. That statement points investigators to Eric H. Anderson Jr.

Anderson has a long criminal history dating back to a rape conviction in 1957, in 1959 he was declared sexually dangerous, which was later lifted in July 1972. He was released from Bridgewater State Hospital in 1974. In 1977 Anderson was convicted of the attack in Kingston Mass. He was sentenced to 15-20 years in prison, and was released in 1988. Anderson then left Massachusetts and went to live with relatives in Maine. In Dec. 1990 Anderson was sentenced to 25-years in Maine prison for attacking another woman. In 1998 Eric H. Anderson Jr. was indicated for Ruth Masters’s murder, and in 2003 was convicted of first-degree murder and was sentenced to life in prison with no parole.

Since that murder, the area is supposedly haunted by a vengeful spirit and other odd phenomena. I was told later that Ruth Masters' deadly attack occurred very near the location I had visited in May 1976. 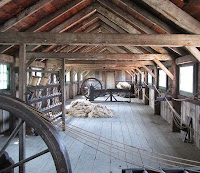 Cordage Park opened in 1824 and was the largest factory located in Plymouth. Plymouth Cordage Company was a rope-making company that designed rope specifically for large ships. By the 1900s, it was the largest rope-making factory in the world. After World War II, the company couldn't compete against a more advanced form of rope made from fiber. In 1964, the factory finally closed down, ending its 140-year run.

Many stories have been told of music being played throughout the old factory as well as children laughing too. Other stories tell of the old elevator operating on its own. Another story is told of a boy who got caught in the smokestack and died. It's said that his spirit will occasionally throw rocks at passersby. I was told a while back that there are 2 dominant entities that roam throughout. A former security guard stated that the place is definitely haunted. Many times, something would rearrange items on his desk. He also stated that the area around the smokestack would sometimes have a sickening 'death' smell.

NOTE: I definitely want to make a trip to the area in the near future. While there, I'd like to checkout the infamous 'Bridgewater Triangle' area as well. You may want to check out the Plymouth section of the 'Ghosts of America' website. Lot's more strange experiences to read about...Lon

Ghosts of the Bridgewater Triangle

Dark Woods: Cults, Crime, and the Paranormal in the Freetown State Forest, Massachusetts