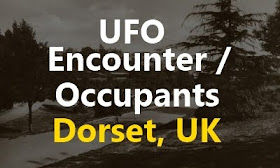 This interesting case came to my attention as the result of a promotion organized by the manager of the local Gaumont to publicise the opening in Bournemouth of the famed movie, Close Encounters of the Third Kind. The idea was to invite a number of local people, who had experienced UFO phenomena, to be guests at the film's opening night. To this-end, the local newspaper published an appeal for witnesses to send written reports of their sightings to me, my job being to sort the wheat from the chaff and put forward the names of the most worthy applicants. Among the reports I received was this one, which I felt was sufficiently strange to warrant proper investigation. I therefore visited the witness on Wednesday 22nd March, taping our conversation, and paid her a further visit on Thursday 6th April to tidy up some points and take photographs.

The local reporter, who had written the original appeal, contacted me for details of any interesting cases which might have come to light, and I mentioned this case. The result was a back page splash in the local paper, followed by nationwide coverage in the London dailies, a situation which the witness had not wanted. Before writing to me she had reported her sightings to no-one.

The lone witness of this event is Mrs. Ethel May Field, 62, a housewife of Sea View Road, Parkstone, Poole, Dorset. Her husband, Maurice, 68, and daughter, Teresa, 24, were indoors watching television when the sighting occurred and noticed nothing unusual.

The exact date of the sighting is not known, but Mrs. Field does recall that it occurred during the latter part of September, 1977, at about 11 p.m. She had gone out to the back garden to take in washing from the clothes-line, when she heard a humming sound which prompted her to look at the sky, which was clear.

Approaching from a SSW direction was a round object with a dome on top. There could have been "something on the dome", but owing to the swiftness of events, Mrs. Field could say no more on this point. The object was emitting light of a brilliant intensity — the object itself glowing with a "greyish" colour, whilst from around the perimeter of the disc, light of a much more brilliant "bluey-yellow" colour beamed downward, giving the overall impression of an umbrella shape. This light did not illuminate anything on the ground, and Mrs. Field did not notice how far down it extended. Beneath the object, Mrs. Field thought she saw a "patterned" effect, but was unsure on this point and unable to elaborate. 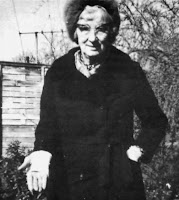 The object's size was difficult to determine, but Mrs. Field eventually decided that it must have been the width of her garden (22 ft.). The altitude was another problem, but Mrs. Field agreed that the object could not have been, very high up, as she was able to observe occupants within the dome.

This dome had two "windows," which did not occupy the full area of the structure, but extended to about two-thirds its height and one quarter its circumference. Standing at these windows were two humanoid occupants, one at each window.

As the UFO reached a point immediately above the far end of the garden, it hovered for a moment, and Mrs. Field put up her hands, palms outwards, to shade her eyes from the brilliant light. At this point she felt a slight sensation of heat on her hands and a trembling or vibration of the ground which lasted just a second or two. Alarmed, she wondered whether there was about to be an earth-quake, and expected people to come running from their houses, but no-one else seemed to notice it.

The two figures inside the object were of normal proportions and were wearing silver suits with head wear of the same colour which covered all but the face. This headwear appeared not to be part of the suit; Mrs. Field thought she detected a collar. She did not notice any buttons or fasteners, but was definite that the headwear came to a point at the forehead. The faces of the entities appeared to possess slender features, and Mrs. Field had the impression that both were male. As she could see almost to the waist, the arms were visible, also of normal appearance. The hands appeared to match the colour of the suit, suggesting that gloves were being worn, but Mrs. Field was not absolutely certain about this. The cabin was lit by apparently "normal" lighting, the colour of our own domestic lighting.

The entity on the right-hand side, as Mrs. Field looked at them, appeared to be operating controls. Mrs. Field did not actually see any controls, but as the figure was looking downwards with his hands engaged in some activity immediately below the window, she assumed this to be the case. The other entity, however, was looking directly at Mrs. Field. He moved over slightly and made a down-pointing gesture with his right hand which Mrs. Field interpreted as an intention to land. Being alone, and now alarmed, she turned and ran back towards the house, pausing for a moment at the door to glance back just in time to see the object speeding away in a NW direction. The total duration of the sighting could have been no more than 20 or 30 seconds.

Mrs. Field rushed indoors where her husband and daughter were watching television. (No interference with their reception had occurred.) She tried to tell them of her experience, but they just laughed at her. When Mrs. Field said she would phone the local paper about her sighting, her daughter dissuaded her, as she felt people would ridicule them. The story was, therefore, reported to no-one until Mrs. Field wrote to me. 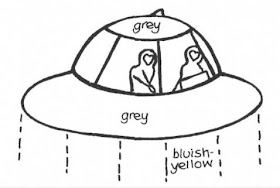 When I first arrived at Mrs. Field's home, she apologised for being unable to shake hands with me as she had a skin infection. At the end of our interview she told me that this trouble had begun the week following her sighting with a spot in the palm of her left hand. This had spread and worsened until both hands were raw and very painful. Her doctor-diagnosed dermatitis, and treated her for this. I examined her hands and found them to be very dry with the skin peeling.

At no time did Mrs. Field claim that this condition had been caused by her UFO experience. She mentioned it only as an afterthought and said she was "keeping an open mind" about the cause. However, bearing in mind that (a) during her sighting Mrs. Field shielded her eyes from the intense light of the object WITH PALMS FACING OUTWARDS: (b) she felt a slight sensation of HEAT ON HER HANDS whilst doing this; (c) the trouble developed the week following her sighting and she had never before suffered from a condition of this kind, and (d) my dictionary definition of dermatitis is "inflammation of the skin by localised irritation, eg., external burning by the sun, X-rays, etc." 1 felt it worth presenting this as tentative evidence of a possible UFO-related physical after-effect.

One report said that "a saucer swooped on her" — a totally inaccurate and misleading statement.

Reports of "burns" were gross exaggerations of the actual condition of her hands.

But the worst example of press distortion was the widely publicised statement that "coastguards saw it too." This was just not true. It arose when a reporter from Radio Solent visited Mrs. Field and happened to mention that his father,, an auxiliary coastguard, once saw a UFO. This case had been widely reported at the time, and even appeared in FSR (Vol.19, No.4, Page 30). That such a chance remark could be so grossly distorted is, to me, incredible.

I have no reason to believe that the story told by Mrs. Field is other than the complete truth. She wanted no publicity, her family laughed at her, and she made no play at all of the condition of her hands, a point she could easily have used as direct evidence in her favour. She co-operated willingly with me, but now wishes to see no more reporters or investigators.

If her story seems a little lacking in precise detail, it must be borne in mind that she was suddenly confronted with a phenomenon totally outside her experience, that she was alarmed, and only observed it for a brief period of time before running to the house.

My view is that here we have a very normal 62-year-old housewife, of limited vocabulary, attempting to describe an event which was real to her.

And that is surely what matters. - Leslie Harris: Flying Saucer Review and UFOIN (1978) 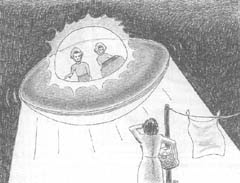 Late September 1977: Parkstone, Poole, Dorset, England. 11:00 pm. Mrs. Ethel May Field, 62, was in her backyard taking clothes off the clothesline. She heard a humming noise and looked up. The sky was clear. Approaching from the south-southwest she saw a circular object with a dome on top emitting brilliant light. Its surfaces were gray, and brilliant blue-yellow (green?) light was being emitted from the underside.

The object appeared to be about 20 feet (6 meters) in diameter. Through windows in the dome she saw two humanoid figures visible almost to the waist. The object stopped and hovered above her garden, its light so brilliant that she put her hands up to shield her eyes. When she did, she felt heat on her hands and a trembling or vibration of the ground for a second or two.

The occupants had silver suits and headgear. Their faces appeared slender, their arms normal, their hands covered by silvery material. The figure on the right appeared to be operating controls, his hands extended downward and out of sight. The being on the left was looking directly at her, and made a gesture as if pointing downward, which she interpreted as being an intention to land. This alarmed her and she ran back to the house to alert her husband and child. She paused at the door to glance back and saw the object speeding away to the northwest.

In the following week she developed skin irritation on the palms of her hands, which had been facing outward when she shielded her eyes from the bright light. She had never before had a skin condition of this kind. - Richard H. Hall - "Dyad Scout Craft" - nicap.org