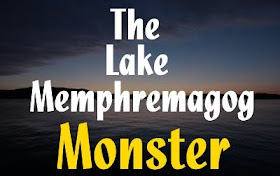 Memphre, a water creature that is said to live in Lake Memphrémagog, has taunted skeptics for more than 180 years. The lake monster supposedly resembles a sea serpent. The following is a recent article about this cryptid:

Lake Memphremagog: The Legend Of Memphre

The border separating Quebec from Vermont runs through dairy fields, traverses a small wood and crosses an abbreviated beach before diving a little over 300 feet under the cold waters of Lake Memphremagog, a 39-square-mile amoeba of glacial water that either does or doesn't contain a 30-foot-long monster. If the lake doesn't contain a monster, its most notable feature is probably its hilly shore, which bursts into riotous color come fall and presents an inviting destination for American leaf peepers exploring the Northeast Kingdom and Montreal homme d'affaires on weekend getaways.

The lake is bookended by two charming towns, Newport, Vermont and Magog, Canada, which display very different sensibilities. Newport has the look of a mill town with a brick main drag and neighborhoods full of small homes for the tradesmen who hang out downtown in greasy spoon diners. The best view in town is from the church and everybody nods or waves to everybody else. Magog is a larger place and many of the Victorian homes just outside the lengthy town center, which contains multiple practical footwear stores and a sex shop, are bed and breakfasts. There is a town park by the water where neighbors walk together and fail to smile at strangers and where a sign reminds visitors to look for Memphre, which is the name of the monster.

Memphre got his name from Jacques Boisvert, who called himself a "dracontologist" and lived in a clapboard house three minutes out of Magog. Boisvert, who died in 2006, was the Canadian ambassador to Memphre. Along with Barbara Malloy, the head of the Memphremagog Historical Society of Newport, he publicized the serpent and, in so doing, the region.

The region on both sides of the border -- crossing requires little more than a few minutes of small talk with a custom's officer -- is quiet and pretty. The delights of this landscape, the maple trees and postcard-ready barns, are no more ostentatious than the people who inhabit it. Syrup is sold out of mud rooms and, aggressive Quebecois driving aside, courtesy seems to be the great cultural achievement. In Magog, neighbors spend a lot of time raking each other's lawns.

In this context, Boisvert's monstrous story has a distinct appeal. It helps, of course, that the story also has compelling details: A viking petroglyph found at the top of a mountain near the lake showed a serpent and, when Europeans first arrived in the area, they'd been warned off swimming in the lake by natives with similar concerns. Of course Boisvert had also seen the beast. As had Mrs. Malloy.

"At first, when you see it is pitch dark," Malloy told Huffington Post Travel by phone. "When I first saw it, it was coming in from the Canadian border. I thought it was jet skiers because it was moving fast, but when it turned to go south more it was parallel to the road and I could see from the side view that it had a head like a horse, a long neck and a big body. As it got closer I could see that it was pretty tall and as long as a house. Then it turned again and went towards the west shore and, as it swam out it disappeared into the mist because it had been raining." Continue reading at Lake Memphremagog: The Legend Of Memphre 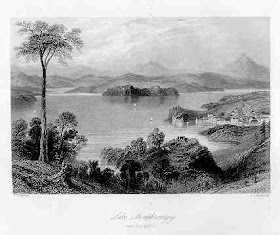 Until the beginning of the 19th century, the only inhabitants of the area around Memphrémagog were the Abenaki...because of the abundance of game and fish. When the first white settlers arrived, they were warned by the Abenaki not to swim in the lake because of the presence of the sea serpent. Among the varied descriptions, it is said to be more or less aggressive and on several occasions, is said to reside in a cave at the base of Owl's Head Mountain, on the shore of the lake.

The first document describing the creature dates back to 1816 and is signed by Ralph Merry IV. He describes four experiences by the citizens of Georgeville and which he finds to be totally credible. He, however, was not a witness to any of these phenomena but only reported the facts as he knew them. He reports what individuals and groups of individuals saw in different areas and at different times. The descriptions usually coincide as to the length and appearance of the serpent like creature. In his accounts Mr. Merry does not refer to the sea serpent but rather to one of the sea serpents of Memphrémagog.

Also, on several occasions since 1847, The Stanstead Journal has published several articles on this phenomenon, some relating numerous sightings which the lakeshore residents have witnessed. These sightings continued throughout the years.

To date, more than 215 sightings have been reported and documented with great care. Each account is signed and recorded; hearsay accounts are simply refused. There are on the average, eight sightings annually which have been confirmed by about twenty witnesses.

In 1961, two fishermen, heading for Newport observed for about forty seconds a black creature, about 20 feet long, swimming partially submerged. According to these men the creature that was about 200 feet from their boat, had a round back and an indescribable head. This scene was accompanied by a strange sound.

In July 1996, four persons witnessed it's presence after observing it for more than a minute. According to them, the creature had several humps, was about 20 feet long and swam about 50 yards between their boat and the shore. This sighting which took place about 7 p.m. is similar to one that took place about 4 p.m. some 10 miles away as observed by three other persons.

The description of a three humped creature coincides with that of September 1994 given by four persons in two different boats. The weather was overcast but the lake was calm not a wave, no wind, they observed for at least three minutes from each of their two boats and object 40 to 50 feet long type of wave shaped like three humps and black in color.

This adventure ended for them when the creature swam under one of the boats and disappeared into the depths of the lake.

Rare are those who can boast having seen the phenomenon on more than one occasion. This is however the case of two Montrealers who after a first sighting in May of 1995, saw the sea serpent again in August of the same year. Better yet, they were able to obtain a film clip which was used in a documentary on the Canada D channel the following October. - vermonter.com 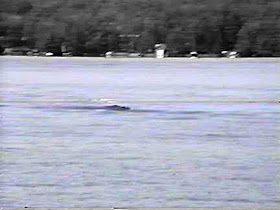 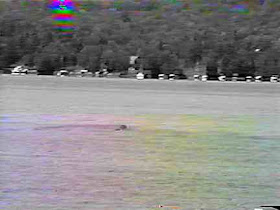 Barbara Malloy, a Newport City resident and local historian, said this week she saw Memphre the Lake Memphremagog monster on May 1.

Like Nessie in the Loch Ness of Scotland or Champ in Lake Champlain, Memphre is the stuff of local legend and history.

It's not the first sighting of the creature that many claim to have seen on this long international lake.

Area newspapers like The Stanstead (Quebec) Journal have recorded sightings of something big and elusive in the lake as far back as the 1840s. On Jan. 21, 1847, an eyewitness reported this: "I am not aware whether it is generally known that a strange animal something of a sea serpent ... exists in Lake Memphremagog."

But it was known long before that. According to historical accounts, American Indians told the first Europeans that there was something in the lake.

Malloy first saw it in the waters off Horseneck Island and again north of the island in 1983.

Memphre is believed to look somewhat like a plesiosaur, a water-living dinosaur of the Jurassic period, brown or black in color, with four fins or paddle-like feet, an elongated roundish body and a long neck. It ranges from 6 to 50 feet long. Popular drawings or artwork show his skin color as green, but that obviously depends on the eyewitness.

This time, Malloy said she saw a jet black hump in the water, which bobbed up and down and then disappeared. Malloy said Thursday another Newport resident confirmed the sighting, only she saw a larger and a smaller hump, but the woman did not wish to go public.

Others have come forward over the years to record their sightings with Malloy and other "dracontologists" like Magog, Quebec resident Jacques Boisvert who keep track of such mysteries in this 30-mile-long lake.

Boisvert named Lake Memphremagog's own sea serpent Memphre, which is pronounced with a long "e" at the end, suitable for use in French or English.

A monk at the monastery at St. Benoit-du-lac near Magog coined the term dracontologie for Boisvert. Dracontology, the English version, is a branch of cryptozoology, for all kinds of mysterious creatures of legend, like Big Foot.

The name even meets the requirements of the Quebec French Language Office, responsible preserving and protecting the French language in Quebec, Boisvert said Thursday.

Boisvert, a renowned diver and local historian, had never seen Memphre himself, but said he keeps an open mind. He and Malloy collaborated for a while in the 1980s on publicizing the Memphre legend and history.

Both collect sightings, and have Web sites to keep the information alive.

Malloy has a display of Memphre memorabilia and sighting information in the Emory Hebard state office building on Main Street in Newport City. Boisvert is heavily into promoting the use of Memphre as a tourist attraction in Magog, and speaks and writes regularly about the history of the lake.

Vermont Secretary of State Deb Markowitz is into a little promotion of her own. She has a children's page off the state Web site, featuring drawings and information of both Memphre and Champ.

There have been attempts to photograph Memphre, but there is no definite evidence. Malloy took pictures in 1989, but they show a dark object sticking out of the water and making a wake. Discounters say these pictures could be of other things. One recent photograph turned out to be a moose swimming across the lake.

Yet the stories of Memphre capture and captivate the imagination. And it brings an air of mystery to this already lovely international lake. 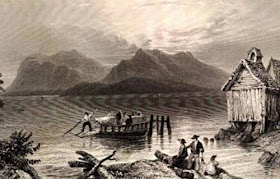