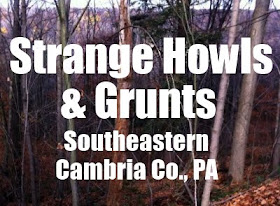 I received the following report from Ron Gallucci, who is a fellow member of the Pennsylvania Bigfoot Society:

Time: No time given, late last night and early this morning

Here is the actual message I received from the homeowner:

Heard very strange noises last night in large wooded area behind house. At first I thought coyote with dogs answering but my dogs didn't alert. Then it got louder and was a mix of high pitch and lower vocalizations, almost like doe alerting but much louder. Heard again this morning, the doe snort sound. Dogs went nuts trying to go after it. Any sightings or reports in the area?


"I went up and looked around the area for about 1 1/2 hours this afternoon. At one point I spooked something on the hill above me. Heard loud crashing and something running but did not see anything. Most likely deer but was enough to get my heart racing. I attached photos of the area. The sounds were coming from down over the hill behind the shed on the edge of the property. The area was full of old coal boney piles and thick pines and very hilly. There were two interesting finds: 1 possible impression that measured 13 inches and some type of stick structure. (See photos)

The sighting location is only a 10 minute drive from my house. I gave the homeowner my cell phone number to contact me if they hear the sounds again so I can head back out to witness them myself. If so I will get them recorded. Until next time...."

Ron later noted "There have been sightings in this area in the past but not since the 80's and 90's. Maybe it supports the fact that they are creatures of habit and do migrate through the same areas. If I get a follow up I'll let you know. I may head out there tomorrow for a bit to look around again. Maybe come in the woods from the opposite side to see if I can find a travel route." 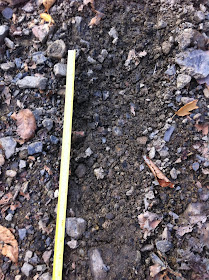 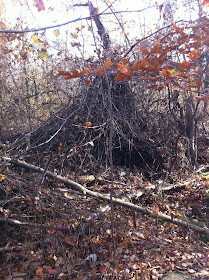 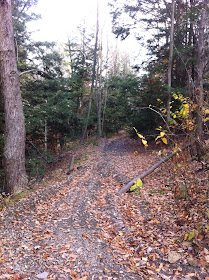 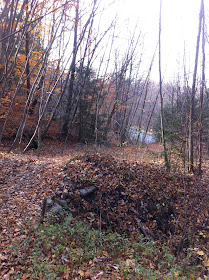 NOTE: The Pennsylvania Bigfoot Society has a list of Cambria County sightings and incidents. I'm fairly familiar with the area just north and east of the general location. In fact, I am aware of at least 2 incidents from 2009 in and around Glendale Lake (near Prince Galitzin State Park). Here is one of the incidents that was chronicled by the BFRO and other assorted incidents in Cambria County over the years. We don't want to get too specific with where this incident occurred. I do have to hand it to the membership of the PBS...they are all about research and protection. I'm proud to be a part of these committed folks...Lon

Monsters of Pennsylvania: Mysterious Creatures in the Keystone State