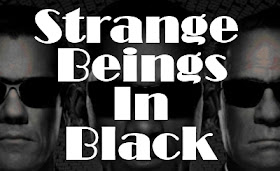 During the past several weeks I have been collecting information related to a strange incident that occurred in the L'Amoreaux neighborhood of North York in metro Toronto, Ontario.

On the evening of July 26, 2012 a girl in her late teens and her boyfriend were returning home after seeing the film 'Men In Black III', which had been released on the same day. As they approached her home they noticed a strange looking woman with long black hair who was dressed in a long black dress and high-heel shoes walking towards them as they pulled into the driveway. Even though the vehicle had dark tinted windows, the girl stated that "the woman made eye-to-eye contact with me." Alarmed by this frightening stranger, they immediately backed out of the driveway and pulled away from the location. The boyfriend decided to circle the neighborhood and then return back to his girlfriend's home. As the girl looked back, she was shocked to see that the woman was "walking very fast and following us." They increased speed and eventually lost their pursuant.

The girl call home to warn her brother about the strange woman. While on the phone her brother looked out the window and the same woman in black was standing directly outside the window wildly waving her arms and staring at him. He looked away...then looked again. The woman had vanished. But...he promptly noticed something else. A man dressed in a black dress suit and wearing ear plugs was walking in the street past the front of the house. The man looked straight ahead and was swinging his arms as he walked...almost like he was controlled somehow. The man proceeded down the street, still in sight of the witness, then unexpectedly vanished!

The girl and her boyfriend soon arrive at her home. The strangers were not in sight. After the witnesses detailed their experiences to each other they looked out the window to see if either of the strangers had returned. What they saw was a large black cat with bright eyes staring back at them. "It (the cat) almost seemed to know what we were saying and thinking" stated the girl. As they watched the curious feline it started to slowly walk toward the vegetation along the driveway...then it simply vanished before it reached the bushes.

Both the girl and her brother submitted audio statements to me...on separate days and apart from each other. Both statements were very similar in the description of specific details. I had made inquiries to investigators in the Toronto metro area as well as local officials. There have been no other similar incidents reported. I initially received this information by chance since it was brought up during an interview with one of the girl's relatives on an unrelated case. The relative noted the incident and I followed up on it.

The fact that these 'strangers' appeared on the same day as the movie release and that the witnesses had just seen the movie is interesting. The anomalous manner in which these series of sightings transformed seems to suggest that this was more than just a prank. The sensations experienced by the witnesses when the woman stared at them, as well as the atypical speed in which the high-heeled stranger displayed during its pursuit of the vehicle indicates possible supernatural traits.

NOTE: Feel free to share your thoughts. If you have information related to this incident, please forward through my contact. Lon

Men in Black: The Secret Terror Among Us

UFOs, JFK, and Elvis: Conspiracies You Don't Have to Be Crazy to Believe