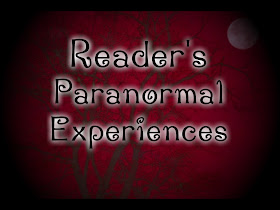 For the most part, I think that actual paranormal experiences convey a higher degree of fear and foreboding as compared to the standard ghost stories that are told with limited modification...except for the time and location. Over the years, I have received many interesting narratives from readers. Here are a few random offerings for this Halloween season:

We were at the cemetery for the burial of my sister's mother-in-law. It was a cold winter day & I decided to wait in the car with my elderly mother while my niece and sister proceeded to the burial site where she would be interned.

A few minutes after they had left the vehicle, I noticed 3 apparitions pass in front of the car from left to right. It was like watching a movie. Each apparition stopped & glared at me for a moment before filing past.

The apparition I remember the most was that of a old man with a young girl maybe 2 or 3 years old. I could see them only from the waist up. Their clothing was from another period in time. I got the impression that she was sitting on his lap.

The other apparition was another old man who gave me a long, evil stare as he passed by the front of the car.

It took me awhile to figure out, but I really do believe that these spirits I saw were going to the gravesite to see the new person being buried.

Till this day I have never gone to that cemetery alone.

I've been trying to research my incident online and have come up with zero references for so perhaps some of your readers may have insight into it.

The other night, my son and I were on the couch in our apartment watching TV. All of the lights were off. Suddenly we both jumped at the same time as we saw a strange apparition fly by our balcony. We're on the third floor so not too high up and the door and curtains were open giving us a clear view to the outside. What we saw was large and judging from the distance between our building and the neighboring building which is approximately 60-70 ft away, it was halfway between the two.

It was a whitish, slightly opaque-like amorphous blob about 10ft by 15ft across. It moved as though it was like a cloud or a mist being blown in a very brisk wind, changing shape constantly. There was no noise aside from the usual street noises.

However, if it were that windy, a mist or cloud wouldn't retain its shape for that long. We saw it pass our balcony and then the further window in a straight line as though traveling toward some goal in the distance. The way it moved indicated that it was purposeful as though in a breeze yet the weird thing is there was no breeze at all. I went out later to test if there was wind and its speed and direction and noted that a very slight air movement was coming out of the north to the south and that thing was traveling in the opposite direction from the south to the north.

We both looked at each other afterward in amazement and said at the same time, "did you just see that? and Yes! What was that thing?!" We exchanged our brief descriptions of what we had both seen and tentatively looked out the balcony door to see if we could see it...but it was gone.

A side note...if it had been any sort of material traveling in a freak wind at that moment its direction, speed and height from the ground would have brought it directly into a grove of trees at the edge of the property where it would have been tangled in the branches or fallen to the ground in a parking lot and swept to the edges of the property into a chain link fence. Further searches of these areas have yielded nothing that would fit the description of this thing.

If anyone out there has seen or heard of such a thing I would sure love to know about your experiences or thoughts. Thanks kindly, Pema

On or about June of 2008, I was sitting in my living room watching TV at approx. 2:00pm, when a young blond haired boy burst through the wall next to my fireplace, and as he stared right straight at me, ran through the living room and disappeared into the dining room. I immediately froze from shock and surprise. Then after a moment gathered myself and ran after him. But he had disappeared. When I mentioned something about it to a neighbor, he said that it must be Josh. Josh lived in our home in the 1980s, and was hit and killed by a car one block away. This is but one of many events that occur in our home.

My husband has witnessed two men come down our hallway in the middle of the night and turn into the spare bedroom only to disappear.

Back in June 2009, as I again sat watching TV at about 10:30pm, the vertical blinds on the window behind me suddenly blew out from the bottom like a great wind had blown them. Not thinking that I had already closed the windows for the night, I went to close the window and found that it was already closed, but that it was perfectly calm outside. I immediately went to bed as I was pretty freaked out.

As I was again preoccupied watching the tube, something caught my eye in the hallway. You know how when you're in a darkened room, and someone opens the door from a brightly lit area you see the light around the edges of the doorway? Well I saw that same thing, only the doorway was opening in the middle of the hall. I have no idea what it was.

We have lived in our home for 6 yrs. and have experienced something odd at least once weekly. We don't feel these spirits are harmful and have grown used to such things. Unfortunately not all of our guests feel the same. Mickey

About 12 years ago, before my stroke in October, 2004, my wife and I were driving from Florida to Leesburg, Virginia, to visit our daughter and son-in-law. We arrived in mid-afternoon while they were at work. Because their house had an alarm we decided to wait around outside until they came home. To kill time, we decided to make a visit to the nearest cemetery and just look at headstones. We are greatly interested in genealogy and just wanted to look around.

We were in the car and drove up a small rise in the road. We were moving very slow. All of a sudden there appeared a lady in a high necked white dress on our right. She seemed to float instead of walking. We came to a quick stop for fear of hitting her. I got out of the car to see if she needed any help. She did not answer me or appear to even see me. She moved across the road to the berm on the other side. THEN SHE DISAPPEARED. Just like that, vanished!!! All of a sudden I was alone on the road. My wife saw her too. THE NEXT DAY I WENT BACK TO THE CEMETERY AND TOLD THE CARETAKERS WHAT WE HAD SEEN. One man GOT UP FROM HIS CHAIR AND RAPIDLY LEFT THE ROOM. Another man remarked that several people have reported the apparition over the years. They had no idea who she was or what she was looking for. The Cemetery is the Union Cemetery in Leesburg, Va. It is not a UNION SOLDIER CEMETERY, THAT IS JUST THE NAME OF IT. They gave me 2 books that list everybody in the graves. I did not believe in ghosts until that time. I do now!! Chet.

We have experienced several different strange things in our house. The house isn't scary. It was built in 1963 by my wife's grandparents. In the first event, my wife took a picture of my step daughter in the living room and two light anomalies appeared in the picture. One had a palm of a hand in it. The other had the face of my wife's grandmother and great grandmother in it. There were also reflections in the back door window of her grandfather in one pane and 2 Yorkie dogs in another. Her Grandparents had Yorkies. Getting that picture enlarged to investigate further, my wife was standing in a line at a copier place, and guy working there asked why she needed that picture enlarged. She explained what the picture contained and the guy behind her in line took two steps backwards and turned and left after she gave him a look at the picture.

Two or three time we had the roll of toilet paper come completely unrolled in the front hall bathroom. I watched it happen one time. At times we hear loud bangs as if something had fallen but, I go to find out what had fallen and there's nothing there to make the noise.

One time we were watching TV on the living room sectional and one of the pillows started moving as if the cat was behind it. We watched it move a couple more times, thinking the cat would come out from behind it. I got up and moved the pillow and there was no reason for the pillow to move.

I would say that every day I will see something out of the corner of my eye and I turn to look but, no one or thing is there. We aren't afraid of this house because, the only people that have lived there was my wife's family. I understand that objects can have spirits attached to them. We do have several antiques that we have acquired over the years. Maybe something I've brought there had someone following along with it. We never know what will happen next. OKC

This is a response to your article about Ouija boards. I thought I would tell you about an experience my sister had many years ago.

She was around 15 or so and was at a friend's house for a sleepover. Her and a few other friends decided to play with a Ouija board in their garage. Her friend's mother was at work and her father was in bed, so they had no supervision. While playing with the board they asked if anyone who wanted to speak to them. They got a YES, they asked for a name. They got M-O-M, they asked for a message. They got U-N-D-R B-R-I-D-G. They did not understand the message at the time.

Later, after they had gone on to bed, there was a knock at the front door. It was the local sheriff who had come to the house to tell the girl's father that his wife had been killed in a car accident on her way home from work that night. Her car was found submerged in water under a bridge just a few miles from their home.

To this day, my sister will not go near or even discuss the subject of Ouija boards.

Ghosts: True Encounters with the World Beyond

Coast To Coast Ghosts: True Stories of Hauntings Across America