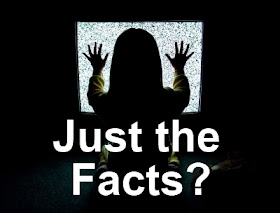 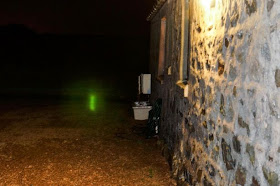 A stunned couple yesterday told how they captured a spooky green man on camera at their home.

Gary and Amanda Linney said the strange figure was spotted running away from their cottage as they experimented with a new camera.

The bizarre snaps emerged just days after another family claimed to have filmed a UFO floating above their house about 25 miles away.

Former policeman Gary, 52, said there was no explanation for the figure.

He said: “It looks like a little green man running. It just disperses into the surface of the road.

“If you look closely, you can see a head. It’s very surreal. I was a policeman and a pilot for 20 years and have never seen anything like this before.”

Hotel owners Gary and Amanda, 46, from Collieston, Aberdeenshire, tried to recreate the picture but have never seen the strange light since.

But they said they weren’t spooked by the images after experiencing a string of paranormal happenings at the Slains Estate house.

Dad-of-three Gary said: “This wasn’t a reflection. We live in two old cottages and my children have seen orbs floating around and heard footsteps. It’s usually around the staircase.”

Amanda, 45, said staff at their hotel – which is also thought to be haunted – suggested the ghostly figure may have come from there.

She said: “I have no idea what it was. We have used the same setting, taken photos in the same location and in different locations and nothing has appeared again.

“We have experienced a lot of strange things since we took over the place two years ago so the staff think something spooky had followed me home that night.”

Last week, Morag Ritchie, of Fraserburgh, told how she was woken in the night by flashing lights outside her house.

The 50-year-old claimed several members of her family saw a UFO. Her daughter Cara’s fiance, Scott Bower filmed footage on his phone.

A Ministry of Defence spokeswoman could not explain the sighting and Grampian Police said there had been no reports of lights in the sky.

He said: “That area has one of the highest concentration of UFO reports in the UK, particularly the Aberdeenshire town of Muchalls.” - Daily Record

Strange but True: Tales from Scotland 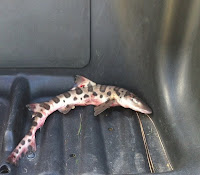 You’ve heard the saying “it’s raining cats and dogs.” It’s supposed to signify a heavy rainfall. But what does it mean when it starts raining sharks?

That’s exactly what happened Monday at San Juan Hills Golf Club, when a 2-foot-long shark was spotted thrashing about on the 12th tee box.

(You read that right. A live shark was found at the golf course.)

The shark was discovered around 4 p.m. by an on-duty course marshal, who immediately called the clubhouse to report the displaced fish.

“It was just wriggling around,” Director of Club Operations Melissa McCormack said. “Honestly, this is the weirdest thing that’s happened here.”

The marshal picked up the shark, placed it in the back of his golf cart and drove it back to the clubhouse. There, cart attendant Bryan Stizer, a San Juan Capistrano resident, briefly placed the shark into a bucket filled with water and a bit of salt, before clocking out on his break to drive the shark out to Baby Beach in Dana Point, where it was released back into the ocean.

"I thought he was dead," Stizer said. "When I dropped him into the water, he just lied their for a few seconds, but then he did a twist and shot off into the water."

McCormack believes the shark was picked out of the water by a predatory bird and was dropped onto the course, which is less than 4 miles away from the Pacific Ocean. The shark was found bleeding from puncture wounds near its dorsal fin.

“It had a little blood on it, but it was still alive,” McCormack said. “We didn’t want to waste any time. Poor guy, he got dropped onto a golf course.”

McCormack said the shark was light brown in color with black spots and could have been a leopard shark.

Leopard sharks are a common species in local ocean waters, said Julianne Steers, chief aquarist at the Ocean Institute in Dana Point. Steers confirmed the species after viewing a photo.

According to the state Department of Fish and Game’s website, leopard sharks can be found in bay environments and shallow waters along the West Coast, from as far south as Mazatlan, Mexico northward to Oregon.

Steers added that it's not as common to find leopard sharks so close to the shore this late in the year.

As for how the shark got to the golf course, Steers said there are predatory birds in the area known to prey on fish in shallow waters, but she could not confirm without seeing the shark for herself.

"I have seen peregrine falcons and we do have ospreys. Between the two of those, ospreys are probably more frequent. Those are the only two that would've had the strength," Steers said.

It's also possible the shark got to the golf course by human hands.

"I have heard and seen instances," Steers said. "You hate to think a human could do this."

A bank robber was quickly captured Monday morning when he returned to Alliance ÂBank — the scene of the crime — after discovering the teller had not given him the full $20,000 he had demanded, Syracuse police said.

Arthur Bundrage, 28, of 306 Kinne St., East Syracuse, was charged with fourth-degree grand larceny. He is being held in the Onondaga County Justice Center pending arraignment in Syracuse City Court.

The teller told him no. When Bundrage demanded again, the teller gave him an undisclosed amount of cash.

Bundrage then left, and the bank immediately called 911.

As officers were responding, Bundrage discovered the teller had not given him the full $20,000 amount he had asked for.

Officers found him standing at the front door attempting to get back in.

He was taken into custody without incident. - Syracuse

Borrow this book for free on a Kindle device with Amazon Prime.
Buy a Kindle today

and start your Amazon Prime free trial
to borrow this book and others at no cost.
********** 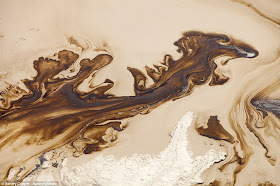 The Devastating Price for Oil

These incredible pictures show the bleak landscape of bitumen, sand and clay created by the frantic pursuit of 173billion barrels of untouched oil.

The Tar Sands in Alberta, Canada, are the world's third largest oil reserve - but lush green forests once blanketed an area there larger than England.

Tar Sands: Dirty Oil and the Future of a Continent, Revised and Updated Edition

Stupid to the Last Drop: How Alberta Is Bringing Environmental Armageddon to Canada (And Doesn't Seem to Care)