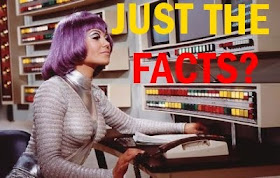 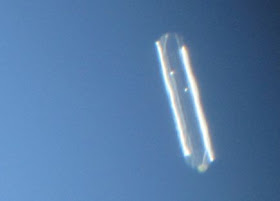 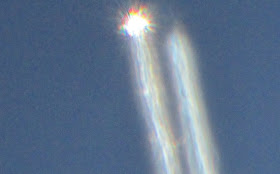 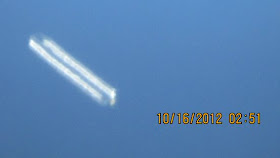 Virgie, KY - 10/16/12 - unedited: My neighbors small daughter noticed a very bright star that shown in the middle of the day, that didnt move, and brought it to my attention. The sky was clear, free of clouds, and blue. Visibility was unlimited. The temperature was in the upper 60s.

I had 4 visitors at the time and they all called to me to come out and look up at something strange. I got binoculars and was stunned to see a bright object that looked cylindrical, with two bright white fluorescent tubes on its sides, hanging very high in the sky. I have an 8" Meade SCT telescope and observed it at about 150 power and it was extremely clear, unmoving, or barely moving, hanging very high in the atmosphere. It was so high, it didnt appear to have shape except through binoculars. It moved ever so slightly that I used the telescopes controls to keep it centered, but it never moved more than 10 degrees from the original position in an hour and a half.

I used my Canon digital camera and took about 50 photos of the object through the telescope and then shot some video also. It oscillated between dim to very bright, (sunlike), on a frequency that varied but was of about 30 seconds.

None of those things fit this description. It appeared to be cylindrical in shape, semi transparent, and had two very bright lines of light, vertically on its outside edges. Being an amateur astronomer, I know my planets and heavenly bodies and it was none of those. After about 2 hours of observing it through my telescope I came in to post my photos on facebook and during that time my wife came in and said it had disappeared.

Blountville, Tennessee - 10/16/12 - unedited: Was in house waiting for ex wife to show up to drop stuff off, her boyfriend pointed in sky when they came here & said what is that me and my fiance looked up and saw the object at first i thought it was a balloon then realized it was much bigger and odder was cylindrical in a vertical position , ran in house to get my skymaster 15X70 binoculars, i could see it fairly well, was no higher then 10,000 ft in sky did not look like a balloon or maybe a weather balloon having never seen a weather one i looked online to see if i could match it but did not, at one point a airforce training In-flight Refueling went over head as it does nearly every tue-thur and it was much higher then object , and there were a few smaller planes in area as we live near tricities airport and get a number of large-small planes over house daily it was slowly moving sw-nw took at least 30-45mins to move a hands width west was around a 50-60o angle looking at it reminded me of a mylar but seethrough at some points it shined so bright as polished metal would i would imagine it would as the sun was not at its noon position yet when first sighted looked at it for nearly 3hrs i brought out my orion XT10 telescope to try and see it better but could not get a lock on it unfortunately. then lost it behind some oak trees. - MUFON CMS

Pikeville, Kentucky - 10/16/12 - unedited: My cousin called my mom and told her that he and his employee had been watching a strange object in the sky for about an hour. The object was brought to their attention by the man next door. Whom, he had never spoken with. The man said he had been watching the object from his porch for about 30 minutes. When I spoke with my cousin he described the object to me and also said that airplanes kept flying by it. I then got in my car and drove to see it for myself. I arrived and could not see it with the naked eye but I could see it with binoculars. I witnessed about 3 airplanes fly past the object. It remained motionless and looked like a silver inkpen floating horizontally in the sky.It did not appear to have a flight path to me as I was there only briefly but my cousin stated that it had been closer and was moving from the right to the left (I am not sure what direction that would be but it could easily be figured out). There were 4 other witnesses there also. I had called my father who is an official in the state government and related what I had seen to him after I left the scene because I had to go pick up my child from a practice. My father later told me that as he was relating my story to one of his employees, the employee recieved a facebook message from his cousin in a town 30 miles away (South Williamson, KY) that had a picture of the object. I havent seen the picture myself. I videoed the object and witnesses but you cannot see anything as the object was so very far away. My cousin took pictures while it was closer before I arrived but you cannot see anything on those but we hope that maybe with the right equipment they can be blown-up and maybe be seen. After I picked up my child from her practice she wanted to go see it but after calling my cousin he stated that you could no longer see it as it had moved beyond the tree-line.It was obviously being watched by our government because of all the planes flying by it. My cousin states that they do not usually fly over the area and definitly not that many. I could not make out what kind of planes they were but we got video of some of them and you can see a lot of vapor trails from them. I dont know what it is. Maybe extraterrestrial, maybe a drone or satalite from a foriegn country that invaded our airspace. I dont have any idea but I believe that those airplanes were diffinitly interested in it.While I was there my cousin said they had seen 16 fly by it. - MUFON CMS 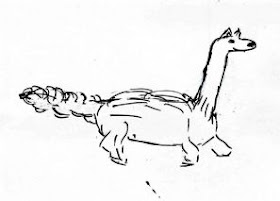 Move over the Loch Ness Monster, Beast of Bodmin and Essex Lion, there is a new fantastical beast in town and it goes by the name of the ‘Creature from Curridge’.

The bushy-tailed, long necked creature was spotted by West Berkshire businessman, Don Prater, at about 4.55pm on October 3.

The 67-year-old, who owns Yarn Fest at Hillier Garden Centre in Hermitage with his wife, Christine, was walking his two-year-old Border Collie called Bozzy when he spotted the animal he has dubbed the ‘Creature from Curridge’.

“I hadn’t been drinking!” stressed Mr Prater. “I was walking the dog along the passageway behind the Women’s Institute Hall in Curridge towards Hermitage.

“After the footpath bends left, about 25 yards ahead of us were two animals. One of the animals looked like a domestic cat but the other one stunned me. It was a dark or grey colour. The height of its head was about two foot but it had the head of a deer. The neck was about eight to ten inches long and thin like a swan’s neck. The body was a cross between a cat and a dog. It had a bushy tail. Everything about it was wrong.

“The cat went off into the undergrowth then the other animal starred at us, took a couple of turns and wandered off into the hedgerows.”

Mr Prater said he has canvassed opinion in Curridge but no-one has seen a similar creature lurking in the undergrowth.

“I don’t have an explanation, but it was real,” he said. “I have never seen anything like that before.”

General consensus in the Newbury Weekly News newsroom is that the creature, depicted in Mr Prater’s sketch, which is pictured, looks like an alpaca or llama.

Both Bucklebury Farm Park and Beale Park, Lower Basildon, told the NewburyToday that all their respective animals are accounted for, so the ‘Creature from Curridge’ could not have escaped from those establishments.

Spokeswoman for Bucklebury Farm Park, Elizabeth Peplow said: “The closest we have to an alpaca are our two lovely llamas, Twinkle and Buttons, who are grazing happily in their paddock.”

Meanwhile spokesman for the British Big Cats Society, Danny Bamping said: “There have been sightings of such a creature around Berkshire, but it does not resemble a cat. To me it looks like a mini, furry Loch Ness Monster!

“I would suggest that Mr Prater reports his sighting on our website.” - NewburyToday

Tales of the Cryptids: Mysterious Creatures That May or May Not Exist (Darby Creek Publishing)

Reports of meteorite / explosion in Louisiana

A loud boom and a bright orange flash that shook up a pocket of northwest Louisiana last night (Oct. 15) was due to an underground explosion at the Camp Minden industrial park and National Guard training site, according to the Webster Parish Sheriff's Office.

Despite early reports that the boom may have been caused by a meteor impact, the real cause was an explosion in an underground bunker belonging to a company called Explo, Webster Parish authorities told Life's Little Mysteries.

According to the company's website, Explo Systems Inc. demilitarizes and recovers explosives. The Associated Press says Explo does its bomb-recycling work on a military contract.

In August 2006, the same company was responsible for a series of explosions that led to the evacuation of two schools and a prison near Camp Minden, which is the former site of the federally owned Louisiana Army Ammunition Plant and is currently overseen by Louisiana's National Guard.

Early speculation from Webster Parish Sheriff Gary Sexton, who told KSLA there was a "possibility that a meteor did hit the ground," may have had some basis. The Orionid meteor shower, an annual shower that has been especially vigorous in recent years, started yesterday and is likely to peak this weekend. Falling meteors are known to cause sonic booms audible on the ground.