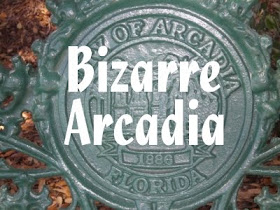 By David Hoes - Although most small towns can claim a haunted building or two, Arcadia, Florida is a focal point for the paranormal. This town of 7,100 residents can even challenge Key West and St. Augustine for the title of "Paranormal Capital" of Florida. Among the local "hot-spots" are:

• A haunted opera house
• A haunted hotel
• A haunted "hanging tree"
• A "rock of love" in a local river. (According to the legend, couples who camp near the rock will get married.)
• A phantom hitchhiker
• The ghost of a boy who appears on a local river
• A mysterious black hearse seen traveling local roads
• A nearby ghost town
• Several haunted residences and antique shops.
• A hill where ghost lights have been seen
• A haunted cemetery

Today's article will provide some details on the last two phenomena -- the Oak Ridge Cemetery and Goat Hill Ghost Lights. 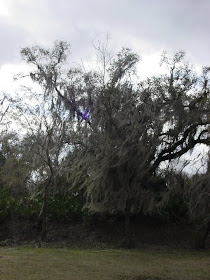 Goat Hill
Just north of town is a small rise locals call Goat Hill. Sadly, the area is on private land and is inaccessible to the public. The road going in has been blocked by a gate and signs are posted letting visitors know they are not welcome. However, a few locals have apparently gained access and have seen the mysterious lights.

On the website 'Haunted America Tours', Clifford Murphy describes his encounter with the lights:

"We put on the river at the park and started up the river going slow and quiet. We tried to run off the moonlight and not use the spotlights.

Once we got away from the road, it was pretty eerie on the river. The banks are high and full of oaks and cypress. The shadows are deep and there are lots of logs and stumps to dodge. Once you are north of the railroad bridge, there are no houses for miles.

Finally we got to a big bend in the river with a giant, high beach of white sand. That was the closest landing to the woods with the Goat Hill. We beached the boat and climbed up the beach out into some flat pasture lands with scrubby trees scattered around. The moon was bright, but there was this weird low ground fog that was a couple feet high. Fences, trees and stuff kind of stuck up out of the fog and you had to watch where you were walking.

It’s hard to explain, but the farther we went from the river the weirder things felt. And the screwing around just kind of stopped and everybody got real quiet. We broke out of some trees, and then we could see the hill where the orbs were supposed to be. It was a couple hundred yards out in the middle of a flat pasture. It’s a big round hill covered in oaks. It was black compared to the white fog that hugged the ground. There was a herd of cows, and it was funny because you could see their backs and heads but not their bodies and legs in the fog.

"Then it was like something just ‘happened.’ I felt something cold come over me. The hair on the back of my neck started to prickle and it felt likes something marched up my back. Like my skin crawled. Just then the cows started mooing and then they all took off running through the fog. You could hear the thuds and feel the rumble under foot. Everybody looked at each other and there were a lot of big eyes.

And then we saw the orbs. My jaw just dropped. This faint orange light came up out of the ground in the trees on the hill and slowly went up through the air to the tree tops. It hovered there. Then three or four more came up and started drifting through the trees. They started getting brighter and whiter and bigger.

The next thing, a big wind came out of nowhere and the mist started rolling around and the orbs seemed like they left the hill and started towards us. Somebody said ‘let’s get the hell out of here.’ And the whole bunch of us took off running for the river. It would have been funny to watch but it wasn’t at all funny at the time. I didn’t look back, I was too busy running."

There are two theories concerning the Goat Hill lights. The first relates to the tragic murder of seven children in 1967. All of the children of James and Annie Mae Richardson became violently ill shortly after eating lunch on October 25, 1967. Within twenty-four hours they were dead; their food had been laced with pesticide. Richardson and his wife both worked, and next-door neighbor Bessie Reese babysat the Richardson’s youngest children. She served all seven children lunch when they came home from school at noon -- a meal of rice, beans and hogshead cheese that had been prepared earlier that day by their mother.

James Richardson was arrested and tried for the murders and would be convicted based on flimsy evidence. Decades later he would be freed when Bessie Reese, who was on her death bed in a nursing home, confessed to the murders. 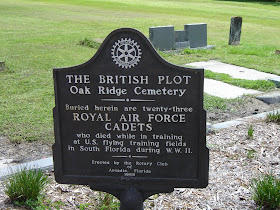 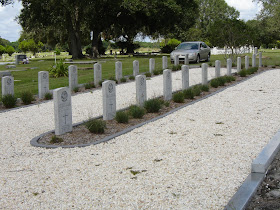 British Cadets Marker and Graves
Cemetery records indicate that Alice, Diane, Dorine, James, and Vanessa Richardson, all of whom died on October 25th and 26th, are buried in the Oak Ridge Cemetery, which is just south of Goat Hill. Are their spirits responsible for the lights? Or are the lights related to the 23 dead RAF pilots who are also buried there?

During World War II, British pilots came to South Florida for training. They were stationed at a base near Lake Okechobee. A few of their barracks are still standing; they were moved to serve as housing at a local fish camp.

Twenty-three of the pilots were killed during training and were buried at Oak Ridge. Some locals believe their spirits are responsible for the Goat Hill Lights. 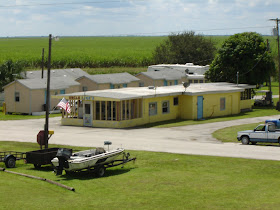 Old RAF Barracks
In addition, some residents have reported strange occurrences at their gravesite. One posted a story on Facebook that when he visited the graves, he saw a Union Jack hanging from the flagpole. Later, when he viewed the photos he had taken that day, there was no flag on the flagpole. Others told the following tales:

"We used to rent a house across the little gully that runs along the south side of the cemetery, across from the British plot. Sometimes late at night we would hear voices from that direction. We could never exactly hear what was said, but they sounded like it had an accent. Never exactly felt the urge to go check it out."

"One night I parked on the side street that dead ends at the cemetery with some friends. We heard singing - really old stuff. Sounded like a bunch of drunk guys. British accents. I didn't know any of the songs, but there was something about the 'white cliffs' (Dover?) and the 'lights going on'."

"I know for a fact that the Arcadia police went in there one night looking for somebody playing the bagpipes."

So are the Goat Hill Ghost lights the spirits of murder victims, RAF pilots or are they something else? I hope to learn more about this strange little town in the near future. 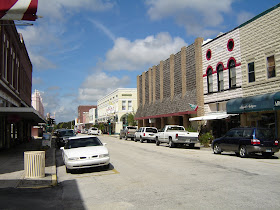 Downtown Arcadia
*Thanks again to David Hoes for another interesting article. David has previously submitted articles and sighting reports to 'Phantoms and Monsters', including Astor, Florida: Ground Zero for the Paranormal? and The Haunted Smallwood Store - Chokoloskee, Florida

Haunted Florida: A Guide to the Departed Soul: Volume One