Another Strange Encounter on the Ottawa River 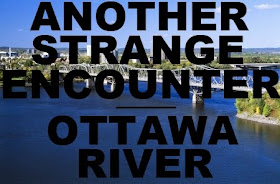 There has been another strange encounter at the Ottawa River in or near Ottawa, Ontario. This time the report involves a possible interdimensional being. Since 1986 there have been numerous reports of UFOs, USOs, unusual creatures, unexplained anomalies, etc. in the general area of the river:

Security guards on the night shift get to see some strange things, both at work and on the way to work. One such odd sighting occurred in Ottawa, the nation’s capital late on October 22nd, between 10:30 and 11:00pm.

“On my way to work travelling southbound on the Champlain Bridge, I noticed something strange out of the corner of my eye.” The security guard’s testimony begins in the same way as many UFO accounts. Something out of the ordinary catches your eye, you look more closely, and there before you is a sight that is not easy to explain.

The guard made a report to MUFON, the Mutual UFO Network, and went on to say, “A bright object in the sky was moving erratically in no general pattern. At first I thought of spot lights or that someone was shining a powerful flashlight.” These are always possible explanations put forward in UFO sightings, but the guard did not think that they were plausible on this occasion.

“It wasn’t until I stopped the car and tried to make a sketch of what I was seeing that I realized what I was looking at. It was the classic flying saucer shape, only upside down, with the dome part underneath.” The object was travelling east, keeping a steady altitude in the low clouds that were beginning to cover the sky over the west end of Ottawa. “It was almost as if the object was using these low lying clouds as cover,so as to remain undetected. If it wasn't for the fact that I happened to be staring right at it as I came over the bridge, I don’t think I would have never noticed it.”

The guard told MUFON that he watched the object for about 20 minutes, during which time it moved quickly, then slowly, changing its flying pattern frequently. Not that there really was a pattern: the craft darted here and there, sometimes fast, sometimes slow. Eventually he had to go into work and his observations ended. “But,” he concluded, “It was very odd. I do believe science can explain almost everything. So, it takes a lot to convince me that something supernatural is happening. I keep an open mind, but this "UFO" experience was indeed an occurrence that I find hard to explain.”

The late John Todd suggested that some UFO that appear to be lights are regressive shapeshifting alien entities that feed off negative energies generated by us, as humans. - Agora Comsopolitan

Click for video - What are Aliens? Do they Exist? John Todd, an Illuminati Defector, Explains.

Driving along the Ottawa River via boat, 3 friends and I see something in the water at around 10pm. This creature was large, created a medium sized wake, and swam fast. Very fast.. We were in a Seadoo boat and we could barley catch up going between 40-60km/h. It was a dark figure and when we cut it off, it went completely under water. I've been asking a lot of question to family and friends as to what this might be and the answers are sturgeon, bear, turtle, beaver.. I've researched all those answers and found out that NONE of them can swim that fast, and as for the sturgeon, this creature was NOT that skinny. It was round, just a bit smaller than a plastic kiddie pool. Ive never believed in this kind of fantasy stuff, but seriously that night has got me thinking....

WHAT CRASHED INTO THE OTTAWA RIVER?

Inquisitr.com - Dozens of residents of Canada’s capital city, Ottawa Ontario and nearby Gatineau, Que., witnessed an object streak across the night sky at about 10pm local time Monday night and crash into the Ottawa River with a “thunderous boom.”

The object had lights on it and appeared to change course several times, like a small plane struggling to stay airborn, before it hit the water.

It was such a sight that emergency rescue and search crews in the area sprung into action and began searching the area using sophisticated sonars and underwater cameras to try and figure out what the object was. Even helicopters from the Canadian Forces Base (CFB) in nearby Trenton took part. On Tuesday at 1:30pm, they discovered an object about 9 meters (30 feet) below the surface, but because of currents and nearby rapids, sending divers down would be extremely dangerous since they would be instantly swept away by the currents.

The mystery? Authorities and residents have no idea what this object laying at the bottom of the river is. There are no planes missing from the area, no other aircraft like helicopters, etc. are missing. There is no debris, no oil slick and even space agencies that were contacted said nothing disappeared from orbit.

On Tuesday afternoon, Ottawa police Const. Alain Boucher said of the object they found on the riverbed:

“The size and the shape doesn’t lead us to believe it’s any piece of an airplane or fuselage or anything like that. It could be a rock, it could be a bunch of logs stuck together, it’s hard to say. No one has come forward with any kind of videos or anything like that at this time. None of the people actually reported seeing a plane go down at the same time.”

But the fact still remains - something fell into the Ottawa River Monday night that prompted a massive co-ordinated search by local authorities and the Canadian Military. They found an object below the surface and don’t know exactly what it is.

It truly was an unidentified flying object that darted across the night sky over the Ottawa River this week.

“There's nothing in the river for us to find in terms of an airplane or helicopter or something that went down (Monday) night,” Ottawa police Const. Alain Boucher said Tuesday afternoon.

Several residents, both in Ottawa and in Gatineau, Que., reported lights smashing into the water around 10 p.m. Monday, along with a thunderous boom.

The calls prompted police, firefighters, paramedics and a helicopter from CFB Trenton to scour the waters for a downed aircraft.

Problem was, there was no physical evidence pointing to a plane wreck: No debris, no oil slick and no indication from airspace authorities that something fell off the radar. There was also no report of a missing aircraft.

Still, searchers launched their boats on Tuesday morning looking for clues that could confirm witness accounts.

They found a few objects in the water, but nothing significant until around 1:30 p.m., when sonar discovered something bulky more than nine metres below the surface.

An underwater camera couldn't reach it and searchers called off the mission not knowing exactly what the object was.

“The size and the shape doesn't lead us to believe it's any piece of an airplane or fuselage or anything like that,” Boucher said. “It could be a rock, it could be a bunch of logs stuck together, it's hard to say.”

“No one has come forward with any kind of videos or anything like that at this time,” Boucher said. “None of the people actually reported seeing a plane go down at the same time.”

NOTE: I don't know what to make of this story. I would tend to think it was a meteorite if not for the witness statements contradicting that theory. It'll be interesting to see what comes of this. The Canadian government and military are tight-lipped about these type of incidents for the most part...Lon

I have created Google Map Images of my location and UFO passage that are added below.

The craft was a cigar shape. Tapered at both ends and thickening in the middle.

The width and thickness of the object observed from my distance was that of a Canadian dime. True length of object viewed from 1.7 miles is 30 meters to 40 meters.

Please note that the human eye has a natural zoom capability for distant objects of about 1,800x. This observation is based on my use of a modern 2011 Sony video camera with a 50x optical zoom and 1,800x digital zoom. Model DCR - SR20

Distance to object has been estimated at 1.7 to 2 miles using Google Earth, measuring from the top of the hill at the intersection at Duford Street and Jamison Avenue.

My viewing location for this event was at the top of the Queenswood Height's hill in Orleans located approximately 10 miles from Ottawa. Intersection at Duford Street and Jamison Avenue.

In 1986 there were no houses built on this hill giving a clear view of the Ottawa River and the Gatineau Valley 1.7 miles away.

Month of sighting is June 1986. Estimate

I had the UFO in sight for only 2 seconds.

Later on I would determine with Google Earth that the distance covered by the UFO during my observation time was 4 miles. This was possible because of my elevated position on Queenswood Heights Hill giving me a clear view of the Ottawa River and Gatineau Valley in the distance.

The UFO travelled rapidly over the Ottawa River moving in an East to West direction towards the city of Ottawa.

The UFO would be spotted by several students at Carleton University, reported to the Ottawa Citizen newspaper, and written up the next day in a small story.

The event happened on a Friday. Exact date unknown.

Technical details of the event.

The UFO moved through the air in absolute complete silence.

There was no sonic boom associated with this high speed travelling object and I was completely surprised. I was listening for it intently.

This UFO therefore had the capability to move through a medium like air without displacing it.

Travelling at 9.45x the speed of sound the only way NOT to create a sonic boom is NOT to displace the medium of air in the first place.

Therefore UFO craft have an ability to move through a medium like air and water without displacing it. This means that there is NO friction with the medium allowing such fast velocities and changes in direction when required.

How this is accomplished is not known at this time.

Could a magnetic field enable an object to move through a medium without displacing it?

The technology to move an object through a medium without displacing it exists.

UFOs Over Canada: Personal Accounts of Sightings and Close Encounters