A Few Classic Tales For Halloween 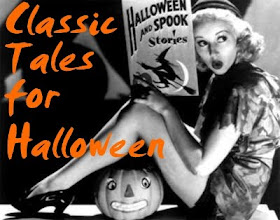 Since the Halloween season is upon us, I hope you enjoy these short classic tales:

By Gesta Romanorum - In the kingdom of England there is a hillock in the midst of a dense wood. Thither in old days knights and their followers were wont to repair when tired and thirsty after the chase. When one of their number called out, "I thirst!" there immediately started up a Goblin with a cheerful countenance, clad in a crimson robe, and bearing in his outstretched hand a large drinking-horn richly ornamented with gold and precious jewels, and full of the most delicious, unknown beverage.

The Goblin presented the horn to the thirsty knight, who drank and instantly felt refreshed and cool. After the drinker had emptied the horn, the Goblin offered a silken napkin to wipe the mouth. Then, without waiting to be thanked, the strange creature vanished as suddenly as he had come.

Now once there was a knight of churlish nature, who was hunting alone in those parts. Feeling thirsty and fatigued, he visited the hillock and cried out:

Instantly the Goblin appeared and presented the horn.

When the knight had drained it of its delicious beverage, instead of returning the horn, he thrust it into his bosom, and rode hastily away.

He boasted far and wide of his deed, and his feudal lord hearing thereof caused him to be bound and cast into prison; then fearing lest he, too, might become partaker in the theft and ingratitude of the knight, the lord presented the jeweled horn to the King of England, who carefully preserved it among the royal treasures. But never again did the benevolent Goblin return to the hillock in the wood.

By The Brothers Grimm - There was once a little girl who was very wilful and who never obeyed when her elders spoke to her - so how could she be happy?

One day she said to her parents, 'I have heard so much of the old witch that I will go and see her. People say she is a wonderful old woman, and has many marvellous things in her house, and I am very curious to see them.'

But her parents forbade her going, saying, 'The witch is a wicked old woman, who performs many godless deeds - and if you go near her, you are no longer a child of ours.'

The girl, however, would not turn back at her parents' command, but went to the witch's house. When she arrived there the old woman asked her:

'Ah,' she replied, trembling all over, 'I have frightened myself so with what I have just seen.'

'And what did you see?' inquired the old witch.

'I saw a black man on your steps.'

'That was a collier,' replied she.

'That was a sportsman,' said the old woman.

'After him I saw a blood-red man.'

'That was a butcher,' replied the old woman.

'But, oh, I was most terrified,' continued the girl, 'when I peeped through your window, and saw not you, but a creature with a fiery head.'

'Then you have seen the witch in her proper dress,' said the old woman. 'For you I have long waited, and now you shall give me light.'

So saying the witch changed the little girl into a block of wood, and then threw it on the fire. When it was fully alight, she sat down on the hearth and warmed herself, saying:

'How good I feel! The fire has not burned like this for a long time!'

The King of Cats

by Ernest Rhys - Once upon a time there were two brothers who lived in a lonely house in a very lonely part of Scotland. An old woman used to do the cooking, and there was no one else, unless we count her cat and their own dogs, within miles of them.

One autumn afternoon the elder of the two, whom we will call Elshender, said he would not go out - so the younger one, Fergus, went alone to follow the path where they had been shooting the day before, far across the mountains.

He meant to return home before the early sunset - however, he did not do so, and Elshender became very uneasy as he watched and waited in vain till long after their usual suppertime. At last Fergus returned, wet and exhausted, nor did he explain why he was so late.

But after supper when the two brothers were seated before the fire, on which the peat crackled cheerfully, the dogs lying at their feet, and the old woman's black cat sitting gravely with half-shut eyes on the hearth between them, Fergus recovered himself and began to tell his adventures.

"You must be wondering," said he, "what made me so late. I have had a very, very strange adventure to-day. I hardly know what to say about it. I went, as I told you I should, along our yesterday's track. A mountain fog came on just as I was about to turn homewards, and I completely lost my way. I wandered about for a long time not knowing where I was, till at last I saw a light, and made for it, hoping to get help.

"As I came near it, it disappeared, and I found myself close to an old oak tree. I climbed into the branches the better to look for the light, and, behold! there it was right beneath me, inside the hollow trunk of the tree. I seemed to be looking down into a church, where a funeral was taking place. I heard singing, and saw a coffin surrounded by torches, all carried by. But I know you won't believe me, Elshender, if I tell you!"

His brother eagerly begged him to go on, and threw a dry peat on the fire to encourage him. The dogs were sleeping quietly, but the cat was sitting up, and seemed to be listening just as carefully and cannily as Elshender himself. Both brothers, indeed, turned their eyes on the cat as Fergus took up his story.

"Yes," he continued, "it is as true as I sit here. The coffin and the torches were both carried by CATS, and upon the coffin were marked a crown and a scepter!"

He got no farther, for the black cat started up, shrieking:

"My stars! old Peter's dead, and I'm the King o' the Cats!" Then rushed up the chimney, and was seen no more.

By Anonymous - A young man and his wife were on a trip to visit his mother. Usually they arrived in time for supper, but they had had a late start, and now it was getting dark, so they decided to look for a place to stay overnight and drive on in the morning.

Just off the road, they saw a small house in the woods. "Maybe they rent rooms," the wife said. So they stopped to ask. An elderly man and woman came to the door. They didn't rent rooms, they said, but they would be glad to have them stay overnight as their guests. They had plenty of room, and they would enjoy the company. The old woman made coffee and brought out some cake, and the four of them talked for a while. Then the young couple were taken to their room. They tried to insist on paying for this, but the old man said he would not accept any money.

The young couple got up early the next morning, before their hosts had awakened. They left an envelope with some money in it on a table near the front door, to pay for the room. Then they went on to the next town. They stopped at a restaurant and had breakfast. When they told the owner where they had stayed, he was shocked. "That can't be," he said. "That house burned to the ground, and the man and the woman who lived there died in the fire."

The young couple could not believe it. So they went back to the house. Only now there was no house. All they found was a burnt-out shell. They stood staring at the ruins trying to understand what had happened. Then the woman screamed: In the rubble was a badly burned table, like the one they had seen by the front door and on the table was the envelope they had left that very morning.

A Halloween Reader: Poems, Stories, and Plays from Halloween Past

Trick or Treat: A History of Halloween