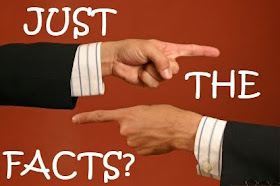 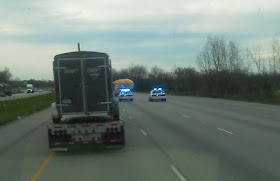 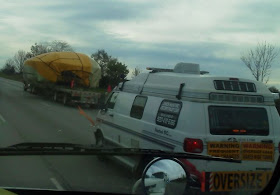 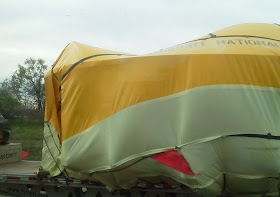 4/5/2012 - Riding east on I-70 just outside of Dayton Ohio there was a tractor trailer with a unusual load on the trailer covered with TARP surrounded by police vehicles as a trucker you don't see four police cars escorting a truck that much with two pilot cars also saw a black SUV in the traffic (not saying it was with them didn't get a look at tag of it. Took pictures figured I would share them - MUFON CMS

NOTE: Wright-Patterson AFB is located in east Dayton, OH...wonder if this was going to or coming from the base? Lon

On the night of Feb. 6, 1975, Marine Reserve Squadron Capt. Larry Jividen was piloting a T-39D Sabreliner (see image above) combat trainer and utility aircraft with five Naval officer pilots on board for a special training flight. He didn't know the evening would evolve into a game of "tag" with an unidentified flying object.

Jividen hasn't spoken about that experience from nearly 40 years ago -- until now.

The nine-year Marine Corps officer -- and later commercial airline pilot -- had taken off at twilight for a two-hour roundtrip that began and ended at the Naval Air Station in Pensacola, Fla.

"At about 9 o'clock, we were descending from a high altitude -- around 33,000 feet -- and I looked off to the right side of the airplane where I saw a solid red light at our 1:00 o'clock position and altitude," Jividen told The Huffington Post.

"It was not flashing like normal anti-collision lights flash on airplanes. I thought it might be some other traffic, but I wasn't sure, so I called Pensacola Approach Control and said, 'Understand we're cleared for the approach, but we have traffic off to our right, and who's first for the approach?"

The traffic that Jividen and the other five crew members saw was mutually described as "a solid, circular object about the relative size of a kid's marble held at arm's length," Jividen recalled.

When they were informed that ground control had no other traffic in their vicinity, Jividen became concerned that the mysterious object hadn't shown up on radar. So he asked for clearance to deviate from their approach and turn directly toward the bright red UFO "just to see what it does." Continue reading at UFO Encounter Revealed After Almost 40 Years By Ex-Military Pilot

The secret service agent employed to protect Jackie Kennedy has recounted the terror following the president's assassination in 1963, and how he wrapped John F. Kennedy's shot head in his jacket.

Speaking on the Today show, Clint Hill, now 80, recounted his determination to throw himself between the Kennedys and the bullets as parts of the president's brain and skull splattered over his shirt.

When a third bullet hit the president's head and the motorcade sped to hospital, Hill said the First Lady refused to leave the car, fearful that onlookers would see her husband's horrific injuries.

Painful memories: Jackie Kennedy's secret service agent Clint Hill appeared on the Today show to talk about his new memoir, in which he recounts John F. Kennedy's assassination in November 1963
'I recognised that the problem was she didn't want anyone to see him,' Hill told the Today show. 'It was a gory situation. And so I took my jacket off and I covered his head and upper back. Then she let go.'

The heartbreaking scene came just minutes after John F. Kennedy was hit in the neck and head by accused gunman Lee Harvey Oswald while driving through Dallas, Texas in November 1963. Continue reading at 'I wrapped the president's exploded head in my jacket': Jackie Kennedy's secret service agent relives horrifying moments after JFK was assassinated 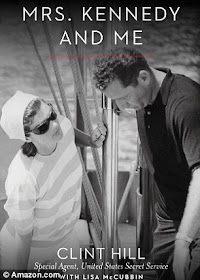 Mrs. Kennedy and Me: An Intimate Memoir

An Australian pilot was given the fright of his life when a snake slithered from the dashboard of the plane he was flying, forcing him to make an emergency landing, according to airline officials.

Braden Blennerhassett was on a freight run for Air Frontier from Darwin to the remote town of Peppimenarti in the Northern Territory on Tuesday when the reptile appeared in the cockpit.

He made a mayday call and landed safely back in Darwin.

“My blood pressure and heart rate was a bit elevated — it was an interesting experience,” Blennerhassett told Nine News.

“As the plane was landing the snake was crawling down my leg, which was frightening.”

Air Frontier director Geoffrey Hunt said Blennerhassett handled the situation well, given Australia is home to some of the most venomous snakes in the world.

“He said, we’ve got a snake on board,” Hunt told reporters, adding that the pilot had trouble communicating with the control tower.

“The snake popped its head out near the transmit button that he needed to press to talk to the tower.”

Blennerhassett managed to get his small plane back to base where a snake handler was organised to meet him.


“We have got another chap here who is an aircraft engineer and a snake handler and he had a look and he couldn’t find it,” Hunt said, adding that they now planned to use a live mouse in a cage as bait.

Until the snake is found, the aircraft will be grounded. - Raw Story

U.S. Virgin Islands police say a woman was allegedly driving with her newborn baby zipped up in her purse.

A police statement says an officer pulled over a woman driving a pickup during a routine traffic stop Tuesday. While asking for the St. Croix woman's license, the officer reported hearing a baby crying but did not see a baby seat in the vehicle.

The motorist then allegedly unzipped a purse sitting on the seat next to her and revealed a tiny newborn.

Police say the woman told them that the baby girl was born at home a week ago and had no prenatal care. She was apparently driving the infant to a doctor.

Authorities rushed the newborn to a hospital. The mother may face criminal charges. Her name and age were not disclosed. - THP
Lon Strickler at 1:45 PM
Share
‹
›
Home
View web version