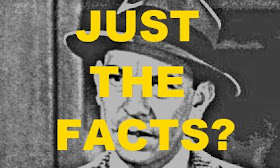 The Waupaca County community of Clintonville has been a real boomtown lately, a designation most residents would gladly do without. City administrator Lisa Kuss said mysterious night-time booming sounds were heard in the city again Monday night and Tuesday morning, following a similar outbreak which began Sunday night. The origin of the noise and accompanying shaking remains a mystery, despite consultations with various experts. “We have spoken to geologists at UW Madison and UW Milwaukee, to look at various earthquakes, isostatic rebounding, and cryoseisms,” she said. “None of those geologists seem to think those are good fits, for what’s going on here.”

Also eliminated – box culverts, storm and sanitary sewers, the city’s water system, blasting, mining, quarrying, military activity, industries, the city’s small dam, and methane from a closed landfill. So what’s left? “Certainly the possibility that it could be some sort of earthy natural phenomenon that’s just happening under the ground, and may or may not continue for a while,” said Kuss. “We may never get it resolved.”

Reports on the Clintonville mystery have included a variety of descriptions of the noises. “People talk about a piece of dynamite going off, a vehicle hitting your building that you’re in, a tree falling on the property, a very loud thumping like a cement ball dropping or a jack hammer, but just one large, loud boom, ” said Kuss - WRN

A renewed effort to determine what happened to aviator Amelia Earhart's plane when it disappeared over the Pacific 75 years ago is expected to be announced today as a recently discovered photo taken months after she vanished is believed to show her plane's landing gear.

The privately funded half-million dollar effort, which is anticipated to begin in July, is expected to be announced by a historical group and the U.S. government.

Analysis of a photo uncovered in 2010 of a plane wreck off the Kiribati islands has led specialists to believe there is a "possibility" that the wheel in the grainy photo could be from the airplane the Electra, the plane Earhart flew, a senior State Department official said late Monday night.

The official added that it was enough to warrant exploration but "a very healthy dose of skepticism must be in play."

"We're not making any bets," the official said, adding that Earhart's disappearance remains one of the world's greatest unsolved mysteries. "It's not what you find, but what you're searching for."

The actual picture is not expected to be unveiled until the event and presentation set to take place this morning, which will be attended by Secretary of State Hillary Clinton, famed undersea explorer Dr. Robert Ballard and the foreign minister of Kirabati. All three are expected to speak at the event in Washington, D.C.

The "event will underscore America's spirit of adventure and courage, as embodied by Amelia Earhart, and our commitment to seizing new opportunities for cooperation with Pacific neighbors founded on the United States' long history of engagement in the Asia-Pacific region," the State Department said in a statement.

The International Group for Historic Aircraft Recovery, also known as Tighar www.tighar.org, which works on the Kiribati islands, has launched a mission to try and search the area where the picture was taken, and use sophisticated Sonar capabilities to see what might be there.

The State Department and Tighar are also working with undersea explorer Ballard, of Titanic fame, on the project.

The search will focus on the remote Pacific atoll called Nikumaroro, which is approximately half way between Australia and Hawaii, according to the Wall Street Journal.

The deserted island of Nikumaroro, which lies 1,800 miles south of Hawaii, was in the line of Earhart's flight path as she flew from New Guinea to Howland Island in July of 1937, when she and navigator Fred Noonan might have gone down during an attempted around-the-world flight.
Tighar champions the theory that the Elektra ended up on the uninhabited Gardner Island, where Amelia landed safely on the island's fringing reef, but after a week of distress calls, rising tides and surf swept the Electra over the reef edge. The group believes that Earhart and Noonan lived for a time as castaways and that the aviator died in a makeshift campsite on the island.
Researchers at Tighar also uncovered a mirror from a woman's compact, buttons and a zipper from a flight jacket during their $500,000 expedition in 2007. All of the found items are American-made and from the 1930s, and all were part of Earhart's inventory. - yahoo 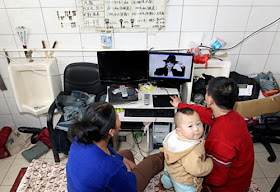 “There’s no place like home!”, I believe the saying goes, and this modest migrant family from China proves it applies even when home is an abandoned public toilet in the city of Shenyang.

Zeng Lingjun was born in a small village, in the Jilin Province of Northeastern China. As a boy, he dreamed of one day attending college, but because his family was too poor he had to abandon his dream and settle for becoming a cobbler and repair shoes for a living. But just because he couldn’t afford to go to college, didn’t mean he was willing to spend the rest of his life in his village. He had bigger plans for himself, so one day, with just 50 yuan ($8) in his pocket, he left for Shenyang, the biggest city in northeast China. Being a hard worker and a skilled cobbler helped Zeng make a living in the big city, and he was soon earning around 2,000 yuan (315) per month. But this wasn’t enough for him to get his own place.

Six years ago, a friend tipped him off that an abandoned hotel toilet was available for rent at a very low price. He immediately borrowed the money he needed and rented the derelict toilet as his new home. He took down the old door and all the wooden cubicles, and laid down some planks to cover up the toilet bowls and make room for a bed. The dismantled cubicles were converted to storage space and, even though the place is just 19 square meters in size, he somehow found space for his own little cobbler workshop.

In 2008 Zeng Lingjun met his current wife, also a migrant worker. They married in 2010 and had a baby shortly after. Now the three of them live in the abandoned toilet. At one point, they saved enough money to move into a normal 80 square meter apartment, but they found themselves coming back to their old home just days after they had moved out, unable to afford all the expenses. Although the smell never lets them forget they live in a toilet, Zeng and his family just flush the toilets whenever the stench becomes unbearable, and just enjoy their life together. After all, who needs luxury when your loved ones are near and you have your health? - odditycentral 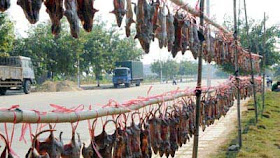 It's the butcher's shop where owner Wan Shen can guarantee that all his meat is squeaky clean - because all he ever sells are freshly caught mice.

Locals in Guangdong province, southern China, have a reputation for being able to cook and stomach any food, no matter how bizarre.

Now they're trying to export to the rest of the country one of their most highly rat-ed delicacies which is considered so tasty that pound for pound it's more expensive than chicken or pork. Fans can even buy a specially cured mouse bacon made into tiny rashers by delicate carving, explained Wan, from Dongguan.

"Some people worry that mice aren't clean but these are all wild, free range mice caught in the countryside and are very healthy. They are thought of as a special treat," added Wan. Customer Mo Lin added: "I've been eating mice for 10 years with no ill effects. You can fry them, roast them or boil them. They're very sweet and tasty." - orange

Man who met God has drawn map of heaven

A South African man is drawing huge crowds to his home after claiming that he has been to heaven four times and has drawn a map of it on a wall. Self-proclaimed prophet, 64-year-old Sibusiso Mthembu, from Mandeni, in KwaZulu-Natal, says there are 11 heavens, each of which he has visited, with his first heavenly journey having taken place in December 1998.

Mthembu claims his other three journeys took place in 2004, 2006 and the last was in 2008. On his return, he drew a map of heaven and its residents. Mthembu said though there were 11 heavens, the main one was Salem, where God's temple was. "Jesus is white and God is greyish in complexion. God is in his youth." He claims he met God during his second journey in 2004.

Mthembu said those people who predicted the end of the world in May last year were correct. "Actually, what was happening on that day is that there was a big meeting in heaven, called Il-Banta to discuss the biggest war to fight Satanism," he said. "The prophet says that God's single day is equivalent to 891 years, so May 23 was the beginning of the count-down to the end of the world."

He said he would like to see the map being printed for the whole world to see. "People must come and see the map as one day someone from Japan or China or Britain will design a map of heaven and the people of South Africa will have forgotten that the map was originally made in South Africa." - sowetanlive
Lon Strickler at 3:03 PM
Share
‹
›
Home
View web version