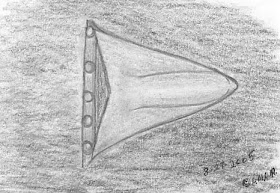 A couple traveled from Eagle Rock, Missouri to a small resort near Marion, Ohio. Witness saw the "stealth-like" craft in the drawing above crossing highway 61 very slowly and very low. She heard no sound and passed right under the object. Over a month after the two encounters the witness continued to experience physical symptoms that surfaced since her encounters in August of 2005.

Description: This case involves a two day journey that neither witness will forget. A couple traveled from Eagle Rock, Missouri to small resort near Marion, Ohio. (Only the wife has been interviewed.) A few miles of West of Indianapolis, Indiana the wife was driving their Ford Pickup truck eastbound on I-70 (see above map of sighting one.) She noticed what looked to be fire, smoke, and flashing lights behind trees to her left (North). She immediately smelled a strong putrid odor that made her sick. The odor was similar to sulfuric acid and burnt tar. (The witness was familiar with chemical odors because she used to work for Dow Chemical.) She then noticed lights rise from the fiery area and noticed them for about 90 miles until she stopped for gas at Richmond, Indiana. The couple then pulled off the road and slept until sunrise and then completed their journey to the resort near Marion, Ohio. Later that day they drove from the resort to Marion, Ohio to visit another relative. On their return right after midnight on August 25 she saw the "stealth-like" craft in the drawing above crossing highway 61 very slowly and very low. She heard no sound and passed right under the object. The same putrid smell experienced the night before was very evident. Upon her return to Marion she noticed the severe damage to the new shoes which had never been worn before her trip. A few days later the couple returned to Eagle Rock, Missouri and the wife was still experiencing sickness. (Coughing, laryngitis, white stool, and burning lungs.) She also stated that her hair looked "burnt. "

Update: Over a month after the two encounters the witness continued to experience physical symptoms that surfaced since her encounters in August of 2005. She has experienced a significant rise in blood pressure, noticed that "black flakes" would fall out of her hair when brushing (mostly occurred a few days after incident) and had a red sore on her ankle which has since healed. The witness purchased another pair of shoes from Walmart similar, but not the same as the boots worn in the encounters. The shoes were purchased at my request. I now have the shoes and will use them in future analyses in comparison of damaged material on the shoes she wore on the nights of the incidents versus material on the new shoes. (Both pairs of shoes are constructed of the same type of "synthetic suede" material.) The material is actually a rayon suede. The witness also added that she felt a "mist like" material during the encounters.

First Update: The witness reports that more than a month after the two incidents that she had noted a significant rise in blood pressure. Subsequent to this the witness visited a doctor and told of her UFO encounter.

Third Update: The witness has reported that she is feeling much better nearly two months after her encounter. Her physician also confirmed her improving physical condition.

Investigator's Notes: This is the first case that I have ever received where a witness became sickened by a close encounter with a UFO. (Actually the witness had two encounters.) Her husband experienced similar problems that the wife did. (He had similar problems with the gastrointestinal track.) He is a disabled veteran and did not want to go to the VA hospital. According to his wife that is why he didn't talk about the problem until well after the fact. The damage to the shoes is another interesting aspect. I have tested the shoes for radioactivity and magnetism and not found any abnormal measurements. I have sent the shoes to an organic chemist (Phyllis Budinger) who has over 30 years of experience in analytical chemistry. The results of the analysis will be posted when available. - UFOs Northwest / MUFON CMS

Chemist's Analysis of Boots: Recently Phyllis Budinger a well respected organic chemist with years of experience completed her analysis of the boots damaged during the encounters. Ms Budinger did not find any unusual residue on the boots. However, she did say that the polymer surface on the boots is soluble in phenols and creosol. (Creosol contains phenol compounds.) The witness said that she smelled a substance similar in odor to creosol. The complete analysis report can be downloaded by clicking here (ADOBE PDF 441 KB). 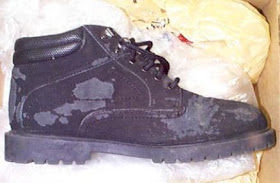 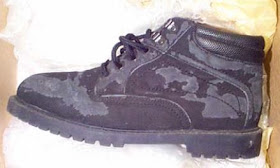