Things That Make Me Say 'Whoa' 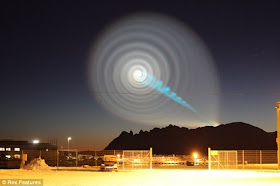 On December 9, 2009, a strange phenomenon was witnessed over Russia, and photographed in northern Norway and Sweden. The event began when a blue light soared up from behind a mountain in the north end of Russia. The light stopped in mid-air, and then began to move in circles. Within seconds a giant spiral had covered the entire sky. Once expanded, a green-blue beam of light shot out from the center of the object, lasting for ten to twelve minutes before disappearing completely. Thousands of onlookers described the event.

One account indicated that the object appeared as a giant fireball which traveled around in circles. It had a powerful light that surrounded its center, and some shooting star visuals. The pictures and video of the bizarre event quickly spread over the Internet, and were accompanied by many claims that the lights looked like a path to another dimension, similar to one that you would see in the movies. After the story was published all over the world, the Russian Defense Ministry acknowledged a failed test of a RSM-56 Bulava missile, on the day in question. It has been suggested that the phenomenon was the result of the failed missile test.

Apparently, the missile failure caused the exhaust of the projectile to travel out sideways, sending the object into an uncontrolled spin. However, people have proclaimed that the event looks like a wormhole opening up, and that the occurrence has been linked with the recent high-energy experiments undertaken at the Large Hadron Collider, in Switzerland. Many Intellectuals have voiced a problem with the official explanation of a failed missile launch, stemming from the fact that the event was sustained for so long. Some have gone so far as to draw connections with the famous Project Blue Beam conspiracy theory, which involves a NASA plan to trick the world population into believing in extraterrestrial life, using high powered lasers that are often mistaken for UFOs. Others suggest a secret government weapons test involving the HAARP program or a Russian equivalent. - ListVerse 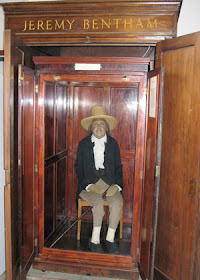 The 18th-and-19th-century social philosopher left the world a rather odd bequest in his will: his preserved, clothed body. No one’s quite sure what Bentham was getting at with this “gift,” but since his 1832 death his clothed skeleton – topped with a wax model of Bentham’s head – has been preserved in a wood-and-glass cabinet known as the Auto-Icon. It now resides at University College London and is occasionally moved so Bentham can “attend” meetings.

Bentham didn’t want for the Auto-Icon to feature a wax head; he actually carried around the glass eyes he wanted used in his preserved face for years before his death. However, the preservation process distorted his face, so the wax replica had to stand in. For many years Bentham’s real head sat between his feet in the Auto-Icon, but it was such a target for pranksters that it eventually had to be locked away. 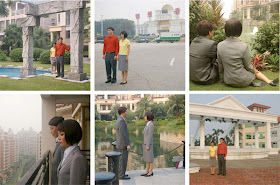 Paris syndrome is a transient psychological disorder encountered by some people visiting or vacationing in Paris, France. Japanese visitors are observed to be especially susceptible. From the estimated six million yearly visitors the number of reported cases is significant. It is characterized by a number of psychiatric symptoms as acute delusional states, hallucinations, feelings of persecution (delusional belief of being a victim of prejudice, aggression, hostility to others), a derealization, a depersonalization, anxiety, and also psychosomatic manifestations such as dizziness, tachycardia, sweating, etc..

The four main factors to cause the disorder are:

1. Language barrier – few Japanese speak French and vice versa. This is believed to be the principal difficulty and is thought to engender the remainder. Apart from the obvious differences between French and Japanese many everyday phrases and idioms are shorn of meaning and substance when translated adding to the confusion of some who haven’t previously encountered such.

2. Cultural difference – the authors state that the large difference between not only the languages but the manner in which Latin populations communicate on an interpersonal level in comparison to the rigidly formal Japanese culture proves too great a difficulty for some Japanese visitors. It is thought that it is the rapid and frequent fluctuations in mood, tense and attitude especially in the delivery of humor that cause the most difficulty.

3. Idealized image of Paris – it is also speculated as manifesting from an individual’s inability to reconcile a disparity between the Japanese popular image and the reality of Paris.

4. Exhaustion – finally, it is thought that the over-booking of one’s time and energy, whether on a business trip or on holiday, in attempting to cram too much into every moment of a stay in Paris along with the effects of jet lag all contribute to the psychological destabilization of some. - cogitz 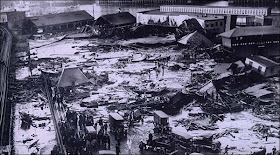 THE GREAT BOSTON MOLASSES FLOOD OF 1919

The date was January 15, 1919, a Wednesday. It was about half-past noon. In Boston's industrial North End, folks were going about their business as usual. Only one small detail seemed out of the ordinary, and that was the temperature — unseasonably warm, in the mid-40s, up from a frigid two degrees above zero just three days before. The sudden thaw had lifted everyone's spirits. To anyone who was out on the street that day, it scarcely seemed a harbinger of disaster.

But trouble was brewing fifty feet above street level in the form of a cast-iron tank containing two-and-a-half million gallons of crude molasses. The molasses, owned by the United States Industrial Alcohol Company, was slated to be made into rum, but this particular batch would never make it to the distillery.

At about 12:40 p.m. the giant tank ruptured, emptying its entire contents into Commercial Street in the space of a few seconds. The result was nothing less a flash flood consisting of millions of gallons of sweet, sticky, deadly goo.

The Boston Evening Globe published a description based on eyewitness accounts later that day:

Fragments of the great tank were thrown into the air, buildings in the neighborhood began to crumple up as though the underpinnings had been pulled away from under them, and scores of people in the various buildings were buried in the ruins, some dead and others badly injured.

The explosion came without the slightest warning. The workmen were at their noontime meal, some eating in the building or just outside, and many of the men in the Department of Public Works Buildings and stables, which are close by, and where many were injured badly, were away at lunch.

Once the low, rumbling sound was heard no one had a chance to escape. The buildings seemed to cringe up as though they were made of pasteboard.

The bulk of the devastation was caused by a "wall of molasses" at least eight feet high — 15, according to some bystanders — which rushed through the streets at a speed of 35 miles per hour. It demolished entire buildings, literally ripping them off their foundations. It upended vehicles and buried horses. People tried to outrun the torrent, but were overtaken and either hurled against solid objects or drowned where they fell. More than 150 people were injured. 21 were killed.

The clean-up took weeks. Once that was done, the filing of lawsuits began. More than a hundred plaintiffs lined up to seek damages from the United States Industrial Alcohol Company. Hearings went on for six years, during which 3,000 people testified, including several "expert witnesses" for the defense who were well paid to argue that the explosion had been the result of sabotage, not negligence on the part of the company.

In the end, however, the court ruled for the plaintiffs, finding that the tank had been overfilled and inadequately reinforced. No evidence of sabotage was ever found. All told, the company was forced to pay out nearly a million dollars in damages — a bittersweet victory for survivors of one of the strangest disasters in American history. - About 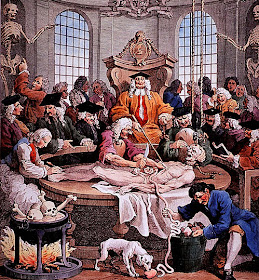 Thanks to advances in science and the relaxing of church and government laws, the dissection of human corpses came back into vogue in the 1300s. At first these dissections were performed in small rooms or houses for the benefit of a handful for medical students. Then, almost overnight, a bored and apparently pretty morbid public started clamoring to attend them as well.

Specially designed “anatomy theatres” were purpose-built in many of the major European cities; most could seat well over 1,000 people. Tickets were sold to the public and the prices often varied based on how “interesting” that particular corpse was. The most expensive tickets sold in Hanover were 24 Groschen to see a woman who died while pregnant. The audiences were so excited about what they were watching that as early as 1502 a surgeon recommended having guards present at each dissection to “restrain the public as it enters.”

While most etchings from the period show only men at the viewings, women attended as well. In 1748, the crowds to see cadavers dissected at the theatre in Dresden, Germany were so large that they started having “ladies only” viewings, during which the women were invited to touch the corpses.

In many countries, these viewings only happened three or four times a year due to a lack of available bodies. In Bologna, Italy, dissections became fancy events, with women wearing their best clothes to the viewing, and balls or festivals followed in the evening.

Then in England in 1751, Parliament passed the Murder Act, allowing for all executed criminals to be publicly dissected. The increase in the number of public dissections did not diminish their popularity, and thousands of people continued to attend them each year until they were finally outlawed in the 1800s. - MentalFloss

NOTE: during the years of research and scouring the web I come across certain people and events that just make me say 'whoa'. So I place a bookmark thinking I may use the reference one day. These are just a few of those 'things'...Lon
Lon Strickler at 4:05 PM
Share
‹
›
Home
View web version