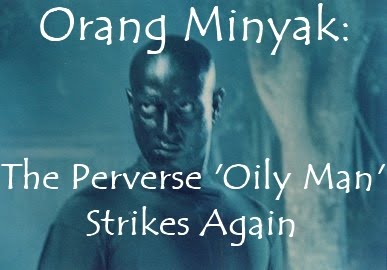 While most people would be in deep slumber at 2am, residents of Kampung Laksamana in Gombak were wide awake, roaming up and down Jalan Laksamana 1 in Gombak, Selangor.

Around 40 residents all divided into groups of about five to 10 people each and fully equipped with spotlights and wooden sticks were on patrol in the village located about 2km from Batu Caves that Thursday morning. Although they were joking with one another, you could feel the tension in the air.

An outsider might think that a gang rumble was on the cards. But what the residents of this village were worried about were not humans, instead they were keeping an eye out for not one, but two, supernatural beings. They are under attack from a couple of orang minyak (oily man), they claim. This village has been buzzing with sightings of the two paranormal creatures for the last 10 days.

Many residents claim to have seen and heard the orang minyak around the vicinity of the Pangsapuri Laksamana and Jalan Laksamana 1. And they all say the same thing the orang minyak are clad only in their underwear and drenched in black shiny oil. They can jump from one roof to another with ease, and vanish into thin air within seconds.

It's definitely no laughing matter, stresses Aslam Khan, 33, one of the villagers “lucky” enough to have seen them.

As he describes them, one is tall, stocky and bald while the other is thin and curly haired.


“It was black and shiny. When I shone my light on it, the thing stuck out its head to look back at me. Before I could do anything, it climbed up the roof and disappeared,” says Aslam.

He says they also found the possible spot where the orang minyak conducts its ritual of reciting jampi (mantra) and having an oil bath. The villagers stumbled across the spot after chasing the orang minyak into some bushes next to the flat.

“There was a large oil patch there,” he says, pointing to the ground.

Adds Aslam, the next night, they found a packet of fried rice and noodles at the very same spot. After returning about an hour later, the food was gone, believed to be eaten by the orang minyak.

According to popular legend, the orang minyak is a person who has undertaken the study of black magic and as a rite of passage, has to rape a certain number of anak dara (virgins) to pass that course.

The villagers are worried because almost every house in the neighbourhood houses a young girl.

As reported by a local Malay daily, the 17-year-old girl did not only see the orang minyak a few times, but also felt “someone” caressing her and calling her to go out of the house.

It reportedly also locked the family members outside the house on Christmas eve, forcing the girl's brother-in-law Kamal Bahari Satar, 36, to break down the door.

“We saw a black heap underneath the kitchen table. When other residents poked it with a bamboo stick, we could see blood stains,” he was quoted as saying. It then fled to a neighbour's house.

After being “disturbed” for five days, Kamal decided to move his family out of their house, and out of the neighbourhood.

Unfortunately, all attempts by Sunday Star to contact him were unsuccessful.

Although some of these stories sound incredible and illogical, it is hard to find any Kampung Laksamana resident who doesn't believe in it, even those who haven't seen it.

The residents have been carrying out patrols from midnight to dawn. Every now and then, a team of youngsters can be seen riding their motorbikes in a convoy around the neighbourhood.

During the Christmas weekend, some 200 people patrolled the street, waiting for the orang minyak to appear and many carried parangs (machetes) and axes, says Aslam.

“Until we manage to catch this thing, we are going to carry on with our patrols. I don't feel calm although I don't have a wife or younger sister,” he vows.

Muaz Amran, 21, another resident who has been patrolling the area every night says he did not believe in such a thing before this.

“I thought the thing existed only in the movies but it seems to be happening in real life,” says the fresh graduate, referring to the 1956 P. Ramlee hit movie Sumpah Orang Minyak. He says that although he hasn't seen the orang minyak for himself, he believes his neighbours.

Another resident who only wants to be known as Man says he did not believe his neighbours at first.

Then, on Christmas day, he was woken up at 3am by a commotion outside his house.

“Apparently, the orang minyak had run into the next door neighbour's house but I just brushed aside the incident,” admits the bank officer.

The next night, his niece, who is a university student, saw the orang minyak sitting on the wall of his house.

“She woke up when she heard something. When she peeked out of the window, she saw a black figure sitting on the wall with its back facing her,” he says.

P. Mohan, 48, also claims to have seen the orang minyak at a house opposite his flat at about 12.30am.

“It was crawling up the stairs of the house, just like Spiderman. When it reached the top it suddenly jumped onto the roof. I don't think a human could do that. It then just disappeared,” he says, adding with a slight shudder, “The hair on my hands just stood up. We can laugh and joke about it, but this is serious. All the families here have young girls.”

K. Chandran, 49, has yet to see the orang minyak but he too is afraid that it will harm his 14 year-old daughter after hearing stories of how it appeared in an abandoned house next to his.

“I feel very scared now. All of us sleep in the hall with the lights on,” says the scrap metal dealer, whose lack of sleep is evident around his eyes.

Chandran shares that he has even installed two additional lights in his house, each costing RM500.

“Ever since these sightings, we have been feeling uneasy. I even dreamt about one of them recently,” he says.

Zaki Zainudin, 42, agrees that it has been difficult to get any peace of mind these past few days now they are startled by the slightest sound and get suspicious of every little happening.

“Last time a broken plate was just a broken plate. Now, we wonder why it has broken,” he says, before checking to see why a dog was howling nearby.

What is clear is that this stress has caused residents to lose sleep. Those on patrol only manage to catch a few hours of sleep before heading off to work in the morning. All the residents also sleep with all their lights on these days.

Almost at their wits end, the residents have made a police report as well as getting help from a few alternative healers, including a bomoh. They have also been holding prayers almost every night to ask for protection from the evil “spirits”.

Their frustration at the menace, and exhaustion, however, is growing by the day.

“I dare it to come and confront me now,” says office worker K. Paramasivam, his exasperation evident, echoing the feeling of every Kampung Laksamana resident.

He claims to have seen the bald orang minyak in an abandoned house, before it climbed up to the roof.

His main concern is for everyone in the neighbourhood, especially the young girls.

“I also have a younger sister in my house. We can't be sleeping two or three hours every day. We are not robots.”

But in a way this orang minyak episode has been a blessing in disguise for the residents of Kampung Laksamana.

Man observes that the slight “tension” between the supporters of the different political parties has disappeared in the past few days.

“Everybody is helping one another out. Everyone is together as one,” he says.

The residents also agree that they are friendlier with their neighbours now.

Paramasivam admits that he never really spoke to his neighbours and got to know them before.

“At the most, I would just acknowledge them. Now I actually talk and get to know them. The neighbourly spirit has been enhanced by these happenings,” he says. - thestar 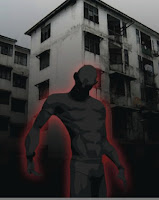 A black-greased man, clad only in equally greasy, black underpants, creeping into a room through an open window that is the image many have of the Orang Minyak. Of course, for most, it is reinforced by the repeat watchings of P. Ramlee's 1956 classic Sumpah Orang Minyak (The Curse of the Oily Man).

Legend as reprised by the Malay hit movie has it that the orang minyak is a regular person, but is pursuing the dark arts. To complete this course of “learning” and for his ilmu (knowledge) to be “effective”, the orang minyak is supposed to rape a certain number of virgins.

According to another popular tale, the orang minyak became what it was because of a black magic ritual gone wrong, and it was only by raping the 40 virgins that he could break the dark spell binding him.

An Islamic faith healer from Kasturi Syifa says he has heard that if the orang minyak rapes the required number of virgins, he will get his wish granted some common wishes are to be good looking and to have the ability to sweet-talk and charm people.

“They say, the person made a deal with the devil,” he adds.

He, however, insists that he does not believe in the orang minyak 100%, as he has not come across one yet.

He points out that all the orang minyak that have been captured turned out to be either thieves or mental health patients.

Ustaz Ismail Kamus, an Islamic faith healer from Darussalam, explains that the orang minyak douse their body in oil to evade capture.

They cannot use violence and can only use their magic to evade capture, he adds, “It also keeps on coming back to the same place to taunt the people and show off its abilities'.”

Although he has not met one personally, Ustaz Ismail believes that the orang minyak exists.

He notes, it would take a few months to learn the black magic, but once mastered, the orang minyak would be able to walk through walls and vanish into thin air. He adds, the orang minyak is also believed to be very agile and can get strength by sucking out the water from a banana bud (jantung pisang). - thestar

NOTE: I had published a lengthy post on the Orang Minyak at Young Women Groped By Apparition in Malaysia. The 'oily man' is a fascinating phenomena that is dredged up every few years, thus creating very interesting commentary...Lon 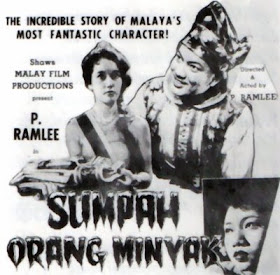 The Malaysian Book of The Undead