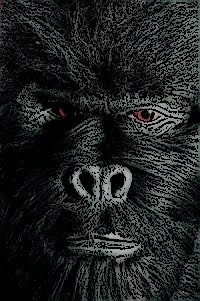 According to legend, the Lofa was a supposed Bigfoot-like creature that lived in Northwest Alabama (including areas of Mississippi and Tennessee)...a region that was once dominated by the Chickasaw people. Frankly, I'm unfamiliar with the stories and reports. Any additional information the readers could provide would be welcomed.

This clan differs from other clans principally in what its members eat. They seldom go out in the daytime but roam about at night in search of food. They do not, however, try to steal.

They are swift of foot and when an accident happens to them they depend on their swiftness to escape. They care very little about women, but when they want anything they generally get it. They think more of their feet than of any other parts of their bodies and their eyes are so keen that they can see anyone before he detects them.

When one of them wants a wife he gets his parents to obtain one. They do not select any kind of woman but are careful in choosing. The younger always get a woman first. These generally sleep in the daytime. If they do not have good luck at night their rest is disturbed but if they have good luck they sleep through most of the day.

One day a number of men belonging to this clan went hunting and camped a considerable distance from home. Afterward they scattered to see what they could find but remained within call of one another, having made an agreement that if anything happened to one of them he should shout for help. But one of them ventured farther than he was aware and got a long distance off. Presently he got tired and sat down to rest, but while he was there a lofa (means “skinner.” The being was thought to have long hair like an animal) came up and said: “What are you doing here? You are intruding upon my land and had better get up and return to your own place.”

But the Indian believed himself to be strong enough for any situation, so he sat still without speaking.

Presently the lofa ordered him off again and added, “If you do not get up and go away I will tie you up and carry you to my place.”

“You may do so if you can,” the man replied, and upon this the lofa seized him.

At first it seemed as if the man were the stronger of the two and he was able to throw the lofa down, but the latter smelled so bad that it was too much for his antagonist, and the lofa overcame him, hung him up in a tree and went away.

The man hung there all night, and when he did not make his appearance at camp the other hunters began a search for him and, when they found him, cut the grapevine by which he was fastened so that he fell to the ground. They asked him what had treated him in this manner but he would not speak and they thought he might have seen a ghost or something of that sort.

Some time later, however, he came to himself and related what had happened. Afterwards, thought he was very fond of hunting and knew that he would be successful, he would not venture out unless someone were with him. - John R. Swanton

When the settlers started to move into the areas previously occupied by the Chickasaw tribes, the sightings and experiences with the Lofa were passed along. As well, there were first hand accounts of close encounters with the beast. The newspapers, did for the first time, print and record some of these encounters.

To the newcomers, everything that was not openly known or written about by "the leading scientific leaders of the time" and the well educated, was dismissed as pure nonsense. Anyone who came into a town with a story about seeing a wild hairy man along the road was most likely thought to be crazy. Everyone "knows" there is no such creature out there like that.

This is something that still continues today. This is why so many sightings and encounters with these creatures still to this day, go unreported, not discussed, not talked about, and the story is surely not taken to a newspaper editors that will add his or her own little comments about anyone coming in with a story like this. In most cases, if someone does tell the story, it is to someone they know and trust very well and that is as far as it goes.

There was a time that some editors remained open minded enough to the possiblity that not everything out there has been bagged and tagged and put in a box someplace.

Gorilla Family Hunt is in Vain

Sheriff W. P. Cotton dismissed a posse of "wild man" hunters today and reported that an all day search for a strange gorilla like family in a Choccolocca Valley swamp was in vain.

Cotton led a group of farmers and citizens into the swamp after rural residents reported seeing a man, woman and child whose bodies were covered with hair and at times walked on all fours. - UPI - 4/15/1936

My siblings and I grew up hearing "Hairy Man" stories. My mother, Clara Odie Anderson Roberts, is almost 90 years old and still has a sharp mind. She lives in the Jackson Health Care Facility and can tell you these things herself.

When she was young, a black man named Dan Scruggs lived near Uncle Tom Purvis’ place on the other side of Friendship, a community which was between Coffeeville and the Witch Creek area. One day he left his house to go to a nearby spring, taking his gun with him. A short time later he arrived back at his home, running andout of breath. He was very frightened, and could only say, "Hairy Man, Hairy Man." As he had neared the spring he saw a "Hairy Man" there and he left in such haste that he left his gun there near the spring.

One day, mother’s oldest brother, Chamlers Anderson, and Elmore Bedwell, were returning to their home after having visited the Roberts family who lived in the area. About halfway between the Roberts place and the Ida Bedwell place, they saw a "Hairy Man" sitting on a log that was over a ravine. I suspect they lost no time getting to their respective homes. This also happened when mother was young. I’m wondering if other relatives or descendants of the people who actually saw the "Hairy Man" might also have heard the stories told and passed down in their families. My oldest sister, Inez, remembers Grandma Anderson (my Mother’s Mother) telling her something that happened when Grandma’s oldest child (Chalmers) was a baby. Grandma said she was walking to a relative’s house and carrying Uncle Chalmers and she walked up on a big hairy ape sitting on a log and holding its head with its hands. When Grandma walked up, it just got up and ambled off into the woods. Grandma said she figured it must have escaped from a circus somewhere and that it may have been sick.

NOTE: The following link may also be of interest - Addison, Alabama Near Brushy Creek and BFRO - Alabama Reports...Lon

UFO and Bigfoot Sightings in ALABAMA: A listing and examination of selected sightings