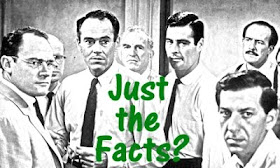 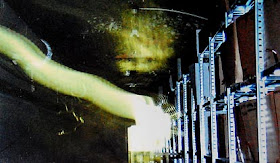 Is this the ghost of the Whittington's 15th-century leper boy?
It looks like a blurred light or a badly taken photograph. But according to ghosthunter Leonard Low, this image taken in the basement of a London hospital is proof that it is haunted.

The 44-year-old builder was visiting his former partner who was having surgery at the Whittington Hospital in Highgate when nurses told him about a "strange presence" in the 19th-century arches.

Armed with a camera, Mr Low asked to be escorted into the basement to investigate. There he claims to have seen a "flashing trail of light".

He said: "We began walking down this long corridor with files all around us. We walked for five or six paces when we saw something down the corridor moving.

"There was something hovering in front of us, getting closer and closer. We saw this trail of light flashing all over the place. Then I saw the ghostly image of a young boy."

Mr Low, who owns a "haunted" medieval building in Scotland, added: "When I went down there I got a feel that there was something there. The hospital used to be a leper colony in the 15th century."

Although he took the pictures five years ago, he has only now released them after making new findings while researching his book, The True Story of the Pittenweem Tower Poltergeist, which features the Whittington ghost.

With the help of analysis from mediums, he believes that the pictures depict a 10-year-old boy called William suffering from leprosy. He said: "I would love to go back. I'm fairly convinced it's a ghost, the place is haunted. The stories I've heard were from nurses who have been there for 40 years."

He also told of the "extraordinary pain" he experiences in the presence of a ghost, adding: "I get pins and needles in the back of my head and I find it hard to see. It is as if my skin knows there is something there."

A spokeswoman for the Whittington Hospital NHS Trust said: "There have been ghost stories about sightings and feelings over the years. There is no evidence but the tale continues." - thisislondon


Chinese Roulette
According to the training instructors of the People’s Liberation Army, it is an exercise that sharpens co-ordination, teamwork and mental strength. Six soldiers standing in a circle toss a satchel of live explosives between them, counting down until it detonates.

Just before it does, the last soldier drops it into a hole and the six men dive for cover. Any miscalculation would be fatal; there is enough explosive in the bag to blast a plume of earth high in the air. The exercise was staged during an exhibition drill in Hong Kong last month, as the island’s chief executive, Sir Donald Tsang, inspected the troops.

An elite garrison of 6,000 PLA troops, including three battalions of infantry, one artillery battery and a special forces company, is based in San Wai, a district of Hong Kong near the border with the mainland. In the past two years, the PLA said, the garrison has been upgraded with new weapons and vehicles to "better protect" the island. The soldiers who took part have an average age of 22 and can speak both Chinese and English, the PLA said, with one officer saying that the tasks were designed to improve “psychological strength” and to forge “fighting spirit” through the “near-impossible tasks”.

It is said the exercise would help the soldiers remain calm if they were confronted with a real emergency. "I'm pleased to see the high-spirited, well-trained and highly disciplined soldiers as well as the advanced weapons and equipment. It is obvious that the state can shoulder the responsibility of defending Hong Kong, and I feel really assured," said Sir Donald.


UFO Abductees Defend TSA Probings as Necessary and Proven Security Measures
Much has been made in the news today about Fourth Amendment protections. In one instance, the Supreme Court unanimously ruled that police must obtain a search warrant before attaching GPS devices to the vehicles of suspects. Law enforcement officials argued that drivers operating on public roads should have no expectation of privacy. Troubled by that rationale, the court unanimously determined that the Fourth Amendment's protection of "persons, houses, papers, and effects, against unreasonable searches and seizures" extended to automobiles. Republican Senator Rand Paul (R-Ky.), son of presidential candidate Ron Paul (R-Texas), also invoked his reasonable expectation of privacy when he refused a TSA patdown Monday in Nashville after airport scanners reported an anomaly. Ron Paul responded with a harshly worded attack against the TSA, saying the agency "gropes and grabs our kids and our seniors and does nothing to keep us safe." But in a highly unusual turn of events, these invasive policies were resoundingly endorsed by a group of alien abductees who described the universe as a safer place because of austere screening procedures.

During a senate hearing last June, Rand Paul argued that TSA Administrator John Pistole's random patdown tactics not only failed to ensure airline safety but demonstrated an appalling lack of education in anti-terrorism.

"This isn't to say that we don't believe in safety procedures," Paul said. "But I think I feel less safe because you're doing these invasive exams on a six-year-old. It makes me think you're clueless that you think she's going to attack our country and that you're not doing your research on the people who would attack our country."

Pistole replied by illustrating the threat a six-year-old girl could pose by boarding a plane with a lethal Build-A-Bear doll stuffed with bricks of C4 instead of "love" and weaponized vials of bio-agents in place of "cuddly wuddly hearts."

"From a TSA stance, Build-A-Bear's motto might as well be 'Where Terrorists are Made,'" Pistole said. "We can't presume the safety of everything brought on a plane, especially by children whose al Qaeda sympathizing parents are using them as weapons against their knowledge. I mean, all you have to do is configure a simple video game system into a detonator and the next time little Aaleyah tries to take out a pig with one of her angry birds, a fiery 777 destroys a neighborhood in Minnesota."

Paul also claimed that when TSA agents probe a passenger's cavity, which occurs about every seven seconds in the United States, they are mining DNA data that can be used as a digital signature. "It's just another type of GPS system, and they should be required to obtain a warrant from a judge," Paul added.

TSA agents at the Nashville terminal implied that Paul refused a patdown after being informed that sensors had discovered what appeared to be a female "marital aid" in his underwear.

Extra Security Measures Benefit Extraterrestrials
Amid the legal back-and-forth over privacy rights, a group of alien abductees rushed to the defense of those who support a rigid police state.

"When the little gray visitors 'forcibly invite' you to be an 'indentured guest' aboard one of their vessels, the first thing they do is administer the anal probe," Turgafoy explained. "But it's not a physiological experiment. These beings have constructed craft capable of traversing infinite reaches of space and time. So doesn't it seem ridiculous to suppose they're going to learn something about us they didn't already know by ramming a metal rod up our butts? It's part of their security screening process. Basically, you're dealing with the alien version of a TSA patdown. And from what I know about our own TSA, it isn't much worse."

Turgafoy and his fellow abductees admitted that ET screenings can be uncomfortable and frightening, but they also described them as incredibly effective.

Turgafoy said: "It's a little spooky at first, sure. You can't speak their language, so you're not really certain what's going on. But then, I can't understand half the things those illiterate teens are saying at LAX. Plus, the ETs don't make us open our laptops, take off our shoes and belts and coats, place all our worldly possessions in bins, throw away liquids we might be carrying, or anything else. They just tug our drawers down a smidge and slip that probe up our backsides. They also attach a little monitoring device in there, and you never need to go through the process again once you're tagged. It's a lot more convenient. And, their machines never give false readings."

According to the group, nowhere else in nearby galaxies are terrorist attacks a concern.

"Collectively, we've been to Betelgeuse, Triangulum Australe, Ursa Major and the Draco system -- all of them have been perfectly safe," Turgafoy continued. "The anal probes are accurate tools for assessing harmful intentions, criminal pasts and violent proclivities. Credible threats have their brain functions suppressed and enter a state of a limbo where they experience only a passing awareness of their own existence. It's a lot like being Rick Perry. But you won't see terrorism or war outside our orbit. Rand Paul might not like having his personal space invaded, but if we just let the TSA really get their hands dirty, we could be living in a similar utopia. I'd bend over backward for that kind of peace of mind. Rand Paul should be willing to do the same."

The eccentric singer reportedly shocked staff when she checked out of London's lavish Intercontinental Hotel last summer and they discovered a pool of red liquid in the tub of her suite.

One housekeeper claimed the pop superstar was "bathing in blood as part of a Satanic ritual".

She told website Truthquake: "Lady Gaga left large amounts of blood in the suite during a stay this summer. The incident was reported to the concierge, who was told to put it out of her mind."

Other sources believe Gaga could have been using the red liquid as part of a "weird" stage costume or prop.

An insider said: "All of the hotel's staff are convinced she was bathing in it or, at the very least, using it as part of one of her new costumes or weird stage routines."

While it is unclear whether the liquid actually was blood or what the singer had been using it for, it is not the first time Gaga has been accused of unusual behaviour in hotels.

It has previously been claimed that she is terrified of evil spirits and reportedly has every hotel and tour venue scanned by a team of paranormal investigators before she will agree to stay there.

The 'Edge of Glory' hitmaker - who has previously said she believes she is inspired by the spirit of her dead aunt - allegedly splashed out £30,000 on state of the art Electro Magnetic Field meters to detect spectres.

A source said: "She believes in paranormal activity and won't take any risks when she is on the road. It's important to her to be safe from spirits." - independent 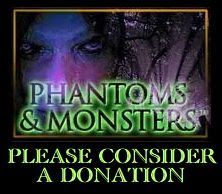 Donations can be accepted through PayPal - 'Donate' buttons are located below or on the blog or go to the PayPal homepage and send the donation to my user email - lonstrickler@phantomsandmonsters.com.

How much do you enjoy receiving 'Phantoms and Monsters'?