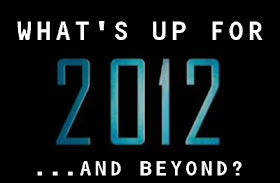 A few weeks ago a reader suggested, since I thought the worst of the 2012 prophecies were not going to occur, that I predict what we can expect in the coming year and beyond. I kindly passed on the offer...but later decided I would make a serious effort toward the challenge. I'm not a psychic per se...but my intuitive sense / sixth sense has steered me throughout my life. Anyway, here we go:

- I think an important 'first step' in Bigfoot research may come to light in the coming year. In the long term, science will continue to inch toward the realization that the paranormal may be closer to the truth than previously thought. We can only hope.

- I feel the overall strong earthquake activity will continue worldwide. I do fear for Alaska. As well, places that don't normally experience earthquakes may feel more rumbling...notably in the US Midwest and Mid-Atlantic. The Pacific 'Ring of Fire' will continue to be active.

- The Euro crisis will continue to deepen...though I see some 'light at the end of the tunnel' for the United States economy. More detail below...

- Tensions between the United States and China will increase because of continued US economic and military influence in Asia. China will continue to increase their economic rise and military build up but western technology will give the US a significant 'leg up' over emerging powers. I expect this trend to continue for many years, if not decades.

- Russia's economic and political footing will become very tenuous in the coming year. Only 20 years after the last Russian revolution, another may be in the cards.

- For the most part, people worldwide are fed up with the status quo. Demonstrations will be the result of frustration, political lies and broken promises. I see bloodshed on the streets...including American cities.

- The world stock markets (in particular the US) will see some losses early in the new year but a consistent increase will begin during the Summer and continue into 2013. Major news in medical research and lower unemployment will spark confidence in the markets.

- 2012 may very well be remembered as the year of disclosure...but not for anything UFO / extraterrestrial related. Powerful politicians from the past will be exposed for illegal activity - conspiracies first thought to be conjecture will be uncovered as fact.

- I'm not going to make any predictions for the 2012 elections since there are many variables to be played out. I will say that I doubt there will be as much 'change' as many expect. Consistent executive leadership may be seen as prudent by the time the elections come into play.

NOTE: these are my personal thoughts based on what I perceive. I feel it involves more common sense than gut feeling. Your thoughts are welcomed - though restraint, tact and courtesy is encouraged..Lon

Fractal Time: The Secret of 2012 and a New World Age

Great Shift, The: Co-Creating a New World for 2012 and Beyond