What Was Seen Flying Before The Russian Rocket Crash?


I received an interesting email this morning from Yevgeni in Riga, Latvia. I may regret posting this but here it is for you to peruse and judge. It has been edited for spelling though I left it mostly intact:

"My brother lives 3 kilometers east to Karakoksha in Altai Rep. Russia the area around where rocket crashed. Please be known that they had many sightings of two large birds about 1 week ago. They were not identified but were seen by people in area many times last week. A man says it was just like a mothman from US and because it had red eyes and bat wings and shaped like a human man. He say this mothman comes before bad times or disasters. Maybe this is what we have. I live in Riga, Latvia but am in contact with him each day. Yevgeni N."


I also receive a email from a reader in Canada who saw a dark anomaly in a photograph (below) of the Progress cargo rocket that was launched from the Baikonur Cosmodrome in Kazakhstan...the same rocket that crashed minutes later in the Russian Altai Republic. 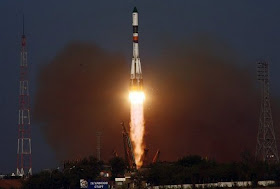 I have looked at other launch photos and have not noticed the anomaly. Below is a recent news report on the launch and crash:

Eight residents of the remote central Asian Choisky district were found to have developed similar symptoms after a Progress rocket booster smashed into Taiga forest after a failed Wednesday space shot, staff at a local hospital said.

All lived in the vicinity of the village Karakoksha and were suffering from increased blood pressure, coughs and fever, Interfax reported.

A Progress cargo rocket launched from the Baikonur Cosmodrome in neighbouring Kazakhstan on Wednesday evening left its planned trajectory and, breaking into pieces, crashed some 1,500 kilometers downrange.

The third stage of the booster struck ground in the Altai's Choisky district. An estimated 1.5 tons of highly-toxic liquid fuel was likely still on board, according to local news reports.

Exposure to the fuel could cause headaches, nausea and breathing difficulties.

But health officials denied there is a link between the Progress rocket's crash and possible health problems of Altai district residents.

"We have checked the area and waterways in the vicinity, and our tests have shown there has been no contamination," said Gennady Onishchenko, Russia's chief health inspector, in comments to Interfax. "These complaints must have some other cause."

Russia's national space agency has announced a wide-reaching investigation into the country's rocket fleet and the Baikonur cosmodrome, as a result of the two accidents. - timeslive

NOTE: If there is further information I will update this post. Honestly, I think this is a lot of 'happenstance' but something may come of it. I do hope these large bird sightings, if true, become part of the story when more local interviews are conducted...Lon
Lon Strickler at 5:25 PM
Share
‹
›
Home
View web version