What was the Beast of Seven Chutes? 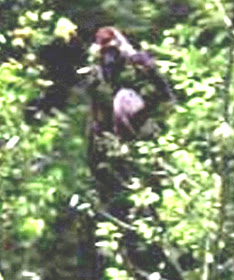 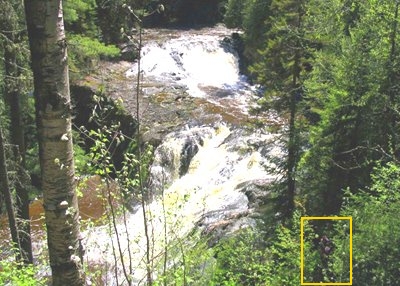 On June 1, 2005, a photo was taken of an unidentified species standing beside a waterfall in the Parc des Sept Chutes in Quebec, Canada. Amazingly, the creature appears to be holding something and is staring at the photographer, who doesn't notice it. This creature does not match the typical descriptions of the legendary Bigfoot, which is usually described a being a massive creature that resembles a human, having a conical head and a human-looking flat face. As well, the Bigfoot is not usually described as being aggressive.

The creature in the photo has several unique physical attributes that differentiates it from typical Bigfoot sightings. The creature is erect, standing on two legs and appears to be between 5-6 feet tall. It has an elongated snout that appears dog-like as well as silver hair on its head reaching to it's shoulders. The creature's body is black and the left arm is visible bent at the elbow. Quite remarkably, the creature looks to be holding a white dog.

Based on the red area that looks like blood on the creatures head, it may have been feeding on the dog. The creature has a triangular shaped head and, unlike most Bigfoot who retreat when seen, this creature is holding his ground and staring aggressively and directly at the photographer.

In August 2008, David Claerr wrote an article comparing the Beast of Seven Chutes and Dogman of Michigan:

In the forests of Northern Wisconsin, Michigan and East Central Canada, between about 42 to 48 degrees of Latitude, there have been a resurgence of reports of a large, bipedal carnivore, within the past several years. There is a notable resemblance in the descriptions to a being in the lore of native tribes: the Windigo, a tall, ferocious creature with a wolf-like head on the body of a man or bear. It also fits the descriptions from European legends of the werewolf.

The cryptic creature is reported to have unique characteristics that differ from the appearance of a Sasquatch or Bigfoot. Generally smaller and less stocky than a Sasquatch, it is said to be closer to the height of an average man, and the arms and legs are similar in proportion to the human. The hands or fore-paws are said to have long curving, sharp claws. The feet, judged by footprints, are said to be elongated somewhat like the human, but the toes are shorter and configured more like a canine. But the most striking feature, according to the accounts, is the elongated muzzle with large protruding canines and pointed incisors.

Accounts of sightings of the creature are often in conjunction with a fresh kill, usually a deer. Its demeanor is hostile and aggressive, according to reports. The non-human expression is said to be malevolent, and the glaring eyes and snarling grimace are said to provoke a deep sense of dread. The accompanying illustrations by the author are based on purported eyewitness accounts and a detail from a photo taken in a park near, Quebec Canada. "Seven Chutes" refers to the cataracts or waterfalls in the park, which is known by the the French name "Parc de Sept Chutes". In a small area of the larger, complete picture of a waterfall, a strange figure is facing the camera and looking up through the foliage on the embankment. Amazingly, it appears to be cradling a white poodle in its arms.

The hand-drawn digital illustrations by the author were derived by a visual study of an enlarged detail of the figure. Sophisticated filtering effects were employed to isolate color groups and enhance details of the structure and textural patterns. A compensation for motion-blur was added. The resulting rectified image, which revealed surprising detail, was used as a visual comparison for the illustrations. (To see the original unaltered picture and more information, refer to the link in the Resources section below.)

The crown of the creature's head has an irregular red coloration that has the appearance of a stain, perhaps blood. The rest of the hair or fur, which follows coherent patterns, is in shades of grey to white, darker at the base and lighter toward the tips. The head has a moderately long mane that appears to obscure the ears. The coat of hair on the arms, legs and body is somewhat uniform and comprised of stiff bristles about an inch and a half long, judging from proportions. The lower legs and feet in the image are obscured, so the illustrated configuration of them is conjectural. The "dog" it appears to hold is less distinct since it has more of a motion-blur, but still looks more like a dog than any other object or animal. From studying the apparent bone structure, musculature, posture and hair-growth patterns it is a reasonable hypothesis that the creature, if real, would have characteristics most in common with the primate branch that includes macaques and baboons. Since the environment in the reports is the colder mid-northern regions, an analogous primate could be the Snow Monkeys (macaques) of Japan, which have a seasonal growth of hair that allows them to survive temperature extremes. Related primates, like baboons, also have enormous canine teeth and a head that can appear very dog- or wolf-like. The hind legs and feet of a baboon are also somewhat dog-like in appearance and function. These conjectures are worth considering if a bipedal, primarily carnivorous primate is postulated. Of course, most primates are omnivores or herbivores, but that does not preclude the possible existence of a carnivorous primate. An analogy to that premise would be the carnivorous marsupial "wolves" and "lions" formerly inhabiting Tasmania.

Reports of this type of cryptic biped in the Americas go back centuries before the arrival of Europeans. There have been sporadic reports since the days of New World settlements of this and perhaps related creatures by well known explorers and historical figures. Whether the phenomenon is real or imaginary, a greater understanding of this and other mysteries can be gained only through scientific investigation and comprehensive field research.

The person who took the photo lives in Quebec, about 15 minutes from where the photo was taken. He speaks French and works as a driver for a construction company and wishes to remain anonymous.

He was sightseeing alone at the Parc des Sept Chutes which is near Saint-Georges de Beauce, Quebec, it was about 90 degrees that day. He did not notice the subject or anything out of the ordinary while he was walking around the park taking pictures. The date was Wed. June 1st 2005 there were no other park visitors around. He took 76 photos (all at medium resolution) of various park features, he also recorded 4 videos. (The videos are available for anyone who wants to view them.) The camera was a Canon A70. He was looking through the photos at home that same day and was surprised to see the subject/creature standing in the woods looking up at him. The photo was number 32 in the set. He has since been back to this area 3 times and taken photos and videos on each occasion. He was back on Monday July 4th and was spooked when he heard something walking in the woods 20-30 feet away from him. He stated that he probably will not be going back there alone. In some of the later photos he took he had his girlfriend stand where the subject was and he stood where he initially was and took photos to get a sense of size and scale. - haveyouseenthiscreature.com

NOTE: was this a small Bigfoot or a large baboon? Any other thoughts on the identity? Or was this simply a hoax? Lon