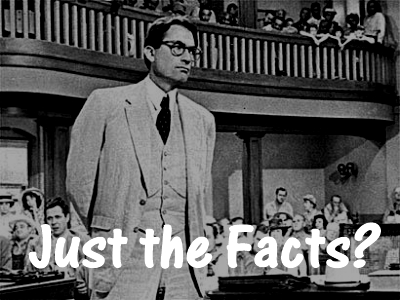 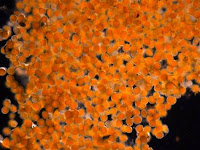 But the mystery is not quite solved. Officials with the National Oceanic and Atmospheric Administration said Monday they don't know for sure what species the eggs are, although they believe they are some kind of crustacean eggs or embryos. They also don't know if the eggs are toxic, and that worries many of the 374 residents of Kivalina, an Inupiat Eskimo community located at the tip of an 8-mile barrier reef on Alaska's northwest coast.

There's been at least one report of dead minnows found in the lagoon of the village the night the eggs appeared last week. Residents also are worried about the community's dwindling reserves in village water tanks even though the orange mass has dissipated from the lagoon and Wulik River, city administrator Janet Mitchell said.

"It seems to be all gone," she said. "But if they're microscopic eggs, who's to say they're not still in the river?"

Scientists also don't know why the unidentified eggs suddenly emerged on the shores of Kivalina last week. Villagers say they've never seen such a phenomenon before.

"We'll probably find some clues, but we'll likely never have a definitive answer on that," NOAA spokeswoman Julie Speegle said.

Samples are being sent to a NOAA laboratory in Charleston, South Carolina, for further analysis. The Alaska Department of Environmental Conservation also sent samples Monday to the Institute for Marine Science at the University of Alaska.

Kivalina residents live largely off the land, and many are worried about the effect on some wildlife and plants from the goo, which turned powdery once it dried — and probably went airborne. Mitchell said some people went berry picking over the weekend, but couldn't tell if the goo was on the fruit, called salmonberries, which are the same color of the eggs. The caribou are in the region now, but she doesn't believe the migrating animals pose much risk as a food source.

The eggs were found on at least one roof and in buckets set all over the village to collect rain water. City Councilwoman Frances Douglas said the gooey, slimy substance was widely spread in streaks along the Wulik River and the lagoon, which is a half mile wide and six miles long. Orangey water was reported from as far away as the village of Buckland, southeast of Kivalina.

Douglas estimated the volume of eggs she could see "in excess of a thousand gallons, easily."

The weather last Wednesday, when the bright substance emerged, only intensified the effect, according to Douglas.

"We had an overcast sky, so it really, really stood out," she said. "You couldn't miss it for nothing."

Even village elders don't recall anything like it, said Douglas, who has lived all her 44 years in Kivalina. She remembers temperatures were colder in her childhood, gradually rising over the years. She wonders if that has anything to do with the invasion of the eggs.

"With climate change, anything can happen, I guess," she said.


Inland Shark Discovery Follows UFO Sightings
by Chris Capps - The idea of discovering out of place animals is nothing new in itself, but after witnesses discovered a shark that had somehow made its way some 50 miles inland from the nearest body of water it may be worth noting that the area has seen an elevated level of UFO activity in the past few weeks. New Hampshire is no stranger to unusual events, but this one just might be the strangest so far. What could have carried a shark 50 miles inland and deposited it in the middle of the New Hampshire Woods?

The macabre discovery was made near Milton when residents came across the unusual smell of the decomposing shark. After informing authorities, the shark was examined by local fish and wildlife authorities to determine if it was a threat to the local environment. Deciding there was nothing overtly dangerous about the corpse and nothing unusual - aside from its peculiar location - it was left where it was found. But when we look at the recent string of UFO sightings in the area the story takes a stranger turn. - continue reading at Inland Shark Discovery Follows UFO Sightings

Scientists from Oregon and New York have been monitoring Axial Seamount, 250 miles (400 kilometers) out to sea, since it last erupted in 1998, and predicted it would again before 2014.

On an expedition to the area on July 29, researchers using a remotely operated robot discovered a lava flow that was not there the year before, and began noticing that the entire area looked unfamiliar.

"When we first arrived on the seafloor, we thought we were in the wrong place, because it looked so completely different," said Bill Chadwick, an Oregon State University geologist who co-authored a 2006 study that forecast another eruption by 2014.

"We couldn't find our markers or monitoring instruments or other distinctive features on the bottom."

The team was using bottom pressure sensors, the same tools used to monitor the sea floor for potential tsunamis after an earthquake. A couple of their recording instruments soon turned up, and scientists determined that the eruption happened on April 6.

The team was excited at the discovery, but cautioned that most volcanoes remain highly volatile.

"Forecasting the eruption of most land volcanoes is normally very difficult at best, and the behavior of most is complex and variable," said Scott Nooner, a geophysicist at Columbia University's Lamont-Doherty Earth Observatory.

"We now have evidence that Axial Seamount behaves in a more predictable way than many other volcanoes."

Researchers were watching the level of the volcanic crater, or caldera, rise after its last eruption at a rate of about 15 centimeters (six inches) per year as it inflated with accumulating magma, and predicted it would erupt again when it reached its 1998 level.

"The acid test in science -- whether or not you understand a process in nature -- is to try to predict what will happen based on your observations," Chadwick said.

"Now we can build on that knowledge and look to apply it to other undersea volcanoes -- and perhaps even volcanoes on land." - rawstory

Since April, more than 800 people, mostly teenage schoolchildren, have fainted after complaining of sore throats and eyes, shortness of breath and coughs.

Amid news reports of unidentified toxic substances, Angola's interior minister ordered an investigation into the cause. There have been claims that the media is to blame for creating mass hysteria.

Tiago was detained in Luanda over a 29 July report on Radio Ecclesia about the fainting of some 20 students at a local school where he happens to teach English. He was released after 23 hours of questioning.

Mohamed Keita, the Africa advocacy coordinator of the Committee to Protect Journalists, said Tiago's arrest of "highlights the Angolan government's obsession with controlling information... instead of focusing on addressing a very serious national crisis." - guardian


Bongo returns home
It’s a monkey miracle — Bongo has been found! An Upper East Side couple grieving over the loss of a stuffed toy monkey they’ve raised like a son the past decade went bananas with joy on Saturday night after being reunited with their beloved Beanie Baby. "I never gave up hope — I prayed, mediated, and now he’s with us again," said Bonni Marcus, 47, who along with boyfriend Jack Zinzi, 58, were devastated after losing Bongo on their way to a restaurant in Park Slope, Brooklyn, on August 1.

The 8-inch-tall doll was found on Tuesday by Luis Barreto, 61, an unemployed Park Slope man, who discovered it atop a parking meter. But unaware that it belonged to the couple and had gone missing — and finding it irresistibly cute — Barreto brought it back to his Sterling Place home, where he displayed it on a stereo speaker. Bongo was only reunited with his "parents" after they returned to Flatbush Avenue by Sterling Place on Saturday to hang more fliers pleading for its return, and Zinzi approached Barreto and some other men hanging out on the street and told them about Bongo and the reward.

Barreto realized he had Bongo and headed with the couple back to his pad for an emotional reunion. Marcus, who teaches English as a second language at a Manhattan private school, Rennert Bilingual, said she "felt Bongo’s presence" even while approaching the apartment. But she said she had to closely examine the monkey to make sure it was Bongo. She confirmed this through the doll’s identifying marks, including a "burn scar" she had accidentally given the stuffed animal five years ago after a lit ash from a cigar she was smoking blew onto it. "I was devastated and gave up smoking after it," she said.

The couple then presented a cash-strapped Barreto the $500 reward they publicly promised for whoever found Bongo — but only after having to beg him to turn the doll over. "I fell in love with Bongo and wanted to keep him," Barreto said. "He looked real to me and is cute." Ultimately, he said he caved in after seeing how heartbroken Marcus was and being promised he could visit the doll. Bongo will also be reunited with his identical Beanie Baby brothers - named Doe, Ray and Me - who Marcus said, “were also suffering.”
Lon Strickler at 1:46 PM
Share
‹
›
Home
View web version