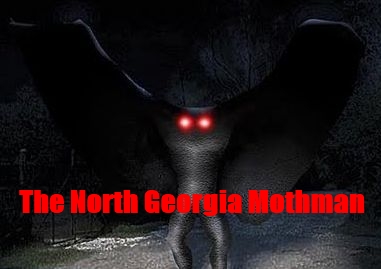 Last December I received an email from a woman (who I will refer to as 'EW') from north Georgia who thought she had encountered a Mothman. After many months of correspondence, the witness has agreed to allow me to post the event but only under strict circumstances. She has reviewed this post and has agreed to the following content being published:

Hello - I am hoping you can shed some light on an incident I had a few years ago. I was twenty-five at the time and was driving to my friend CW's house. It was quiet at 11:30 pm as I drove south on an old country road off of (redacted) highway near (redacted) in north Georgia. Very few people pass this way because it leads to nothing but a small group of houses. I turned on the radio but nothing came on. I figured it was a blown fuse but then I started to heard weird scratching sounds coming through the speakers. It sounded like a distant voice but I couldn't understand what it was saying.

Suddenly, something flew in front of the car and hit the windshield with enough size and force that it totally mangled the grill and hood. I immediately stopped the car. I heard what sounded like wings flapping on the roof, but then something rolled down the back window onto the trunk then eventually on to the road. I thought I killed whatever it was. A woman in a truck had pulled up from behind and said she saw the thing hit the road. She said that it's eyes were glaring bright red. As we looked more closely at this thing it resembled a man with large bat-like wings. The woman walked back to her truck and pulled a shotgun from the back and pointed it at this bat-like creature. 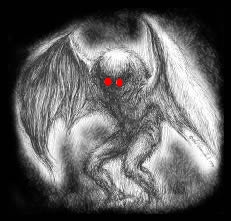 The creature 'EW' claims she encountered

It was starting to move and we backed off. It slowly stood up on two large raptor-like claws, turned and stared directly at us with those terrible bright red eyes. The woman pumped the shotgun. It slowly levitated off the ground with wings spread until it was about 10 foot up then instantly, it let out a deafening screech as it just disappeared with a loud 'swoosh'. The woman (who I found out later was CW's aunt) and I just looked at each other.

This thing had the body of a well-built man. It had no feathers but charcoal gray skin like that of a bat with some hair on the shoulders and around the eyes and legs. When it spread it's wings, it had the span of 12 foot or more. I estimate it was about 8 foot tall. It had no head however, just the eyes embedded on the shoulders that had brows. I didn't noticed a mouth or nose. There is no way I was going to report this and CW's aunt totally agreed. We both drove off to CW's house. I was so shook up I stayed the night.

The next morning, I went outside to inspect the car. There was a huge crack in the windshield and the grill was mangled beyond repair. The hood also had a deep 25 inch dent. I started to walk back to the house when I noticed something laying in the grass beside the garage. It was CW's Golden Retriever lying dead from massive lacerations up and down it's back. I just knew that thing did it.

That was 3 years ago and I constantly dream of this creature. I was told by a friend that I had encountered a Mothman. It looked more like a Batman to be honest. I decided to look up a few of the sightings by others and saw your name and blog. Many of the images on Google were very similar to what I saw. I wrote to someone else about a year ago but they never got back to me. I have included 2 of the images I think look the most like the creature I hit with my car that night. Could you contact me at this email? Thank you for your time. EW

NOTE: I contacted EW and tried to answer her questions. I have no doubt she witnessed a winged humanoid and most likely a Mothman. She agreed to let me post the incident provided I leave out several of the more personal points from the original email. I will say that EW has experienced many of the same anomalous events claimed by a few of the original Point Pleasant, WV witnesses...including some I discovered myself through research and witness interviews. Lon
Lon Strickler at 4:24 PM
Share
‹
›
Home
View web version