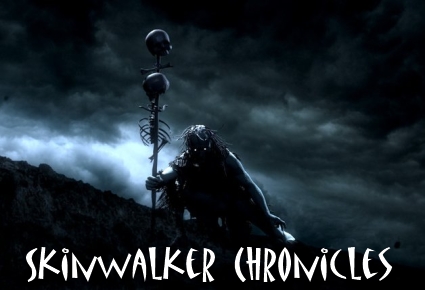 This past December, I posted Skinwalker Chronicles that referenced stories of the infamous malevolent witch capable of transforming itself into a wolf, coyote, bear, bird, or any other animal. Since that time, I have received several anecdotes and inquiries about Skinwalkers. A few weeks ago, I compiled a few anecdotes and posted Skinwalker Chronicles II. The following are several more responses that were forwarded and referred to me:

"...my grandpa was asked by "the old woman" to go with her to Snake Butte. She had a gunny sack full of dog pups with her. They're walking along a while until they get to the butte. There's a rock there that when you go around it you come to the butte. She tells him to wait there for her no matter how long she takes and not to go look at what she's doing. He sits for over an hour and starts to get bored so he goes around the corner. As he does he sees 2 huge snakes eating those poor pups with the woman standing there laughing with an evil tone when suddenly she herself turns into a snake and starts eating the pups! He was so freaked out he hauled ass out of there and headed straight to his house 5 miles away. Later on he sees "the old woman' and she gets mad at him for watching her and not waiting for her at the rock. Since that time, everyone in our family stayed clear of her until the day she left. That's another story"

"I've seen a skinwalker ONCE! I have never seen one since. My older brother, older sister and I were going home for the weekend. We were coming in from Phoenix. We had to leave pretty late. It usually takes us 5 hours to get home which is in Low Mountain near Pinon, AZ. We drove toward Keams Canyon highway and took a certain dirt road that would take us straight to Low Mountain. Before we reached the dirt road we noticed a very old lady walking on the side of the highway with a cane at 2 o'clock in the morning! She had her scarf around her head, a long black jacket and wearing a green dress. We did not think anything of it but thought it was weird that she was walking late at night on a highway. The reservation is really dark at night and there are hardly anyone driving on the roads. We eventually turned on the dirt road.

A mile away from the highway we noticed the same old lady walking on the side of the dirt road with her cane. I freaked out! I started crying because we knew that it was the same lady 15 miles back. My brother stepped on the gas and started driving faster. He gave us some medicine to protect us from harm. We eventually got to a highway that takes us to Chinle, Low Mountain, or Pinon. We passed the first bridge and we noticed that the old lady was sitting on the highway with her head down waving the cane in the air. Before we could pass her the car just shut down and wouldn't start. The old lady stood up facing the opposite way from us so we wouldn't see her face and walked across the other side of the road. She turned her head to face us and her face was painted all black. She kept walking and eventually disappeared in the distance. My brother turned the ignition and the car started!! It scared the hell outta me!!! I was crying so bad that I never wanted to drive through the road again.

When we got home we told my parents about it. My dad said that there was an old couple that lived between the two highways that did bad medicine on people. He also said that her husband had passed on not long ago and that she walks that road every now and then. They had two kids; one of them passed away at a very young age with an unknown cause of death and the other one drinks and huffs. We ended up driving back the longer way which was taking the highway to the junction road and going toward Ganado. It was very real and very scary."

"...my first encounter was when I was about 13 years old. My family always has a peyote meeting on New Years Eve and into New Years Day. On this particular New Years Eve my family was blessing the new year, all my cousins and I were sleeping in my Mom's hogan while most of our parents and guests were in the tepee praying. They said that a man saw something outside the tepee and he told the fire chief, and he told my uncle. My uncle woke up my older brothers and they got out the guns and our spotlight to look for whatever was creeping around our houses.

We live in a small valley in the highest part of our part of the reservation, near Pinon. All of a sudden I heard a loud gunshot, my brother's 30-30. It scared the hell out of me since I was fast asleep, but my sister was the only one in the house with us and she already had burned some cedar and had said a protection prayer for us. My brothers and one of my cousins were outide shooting at some sort of creature that was running around in an arroyo about half a mile from our house. My niece and I had gotten out of our beds and were watching from the window. They were sure that they had shot it a few times but it would just get and run off again.

When my mother and father smeared white ash on the bullets they started shooting again the creature left our valley. It is a very taboo to do any sort of hunting or shooting during blessing ceremonies but something had to done that time. That is as close as I have ever come to a skinwalker, as far as I know."

"...the only reason I know about skinwalkers is because of my boyfriend and my Mom told me abut them...no lie, it's is scary and you shouldnt mess around with it at all. But you shouldn't say its fake case odds are you wouldnt even know. I have a lot of shapeshifters, skinwalkers, staginies or whatever you would perfer to call them living or staying by my house. They follow my boyfriend around and sometimes I see them watching me...standing outside my window. About 3 months ago there was a skinwalker outside my house watching my Mom as she came home from work...he was outside for a long time. No one has the right to say what is fiction or fact because you wouldn't even know. A skinwalker told me when my dad was going to die. It was broad daylight and I was in the car with my family. I saw a white owl and it looked right back at me. A week later my dad passed away...so don't say anything unless you know for a fact!"

"There are too many weird encounters that went on the year my husband and I started dating. It was as though 'someone or something' did everything they could to keep us apart....for instance.

It was a summer evening and the sun had started to go down and we took a short stroll just outside my house. As soon as we started walking, I saw a shadow quickly appear and walk behind a huge cedar tree. Once I noticed this I told my boyfriend and he threw a big rock at it. As soon the rock hit the tree, a huge bird or owl flew out of the cedar tree. I have never in my life seen anything this big! The wings on this thing had to have stretched out at least 7-8 feet across. It was dusk, but still enough sun out to see in front of me and I know for a fact I saw something. I believe whatever hid behind that tree turned into a bird and flew off. It was so weird. After that, we had a very unsettling summer of this strange "shadow visitor" making it's appearance every now and then."

"...you want me to describe the witch who is a 'skinwalker'? My father told me a story about how they initiate themselves to become one of these bad medicine men/women. They have to kill their own child or sibling; and also they have sex with their siblings. They become this weird looking animal that can run faster than a car. They do wear very old animal skins and they do not allow to expose themselves. We'd be so damn lucky to catch them red-handed but they have powers to paralyze you so that you cannot see them. If you do happen to see who the person is they eventually die in four days so that is why they are very secretive. It does have a lot to do with jealousy. They want what you have even if it is nothing to you...it's huge for them. You cannot kill them with a white man's gun powder, or anything of that nature. It all has to be traditional weapons we use to use a long time ago such as an arrowhead, traditional prayers, or a certain type of ceremony.

Most medicine man/woman would never admit who it is but they'll hint it to you which can be frustrating. My father also said that they can be the sweetest person in the world to you and you'd never know that they're witching you. They use dead people's bones to make you go crazy and you don't even realize how much you lose self-respect. They are very scary and wicked people.
Lon Strickler at 5:08 PM
Share
‹
›
Home
View web version