Is There A Connection Between Reptilians and Vampires? 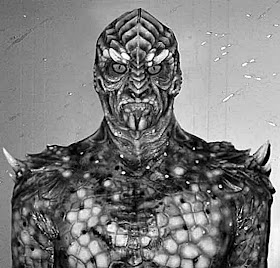 There has been a lot of speculation, especially by British author David Icke, concerning a real connection between non-terrestrial reptilian species and vampire beings. Some feel that this is simply a conspiracy theory or used as an allegory in order to sell books. But both elements, in my opinion, offer some insight into a hypothesis that may help explain some of the mysteries of why we are on Earth. 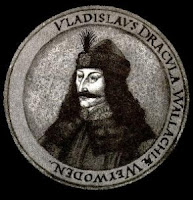 Draconians and Dracula...is there a connection?

This is where part of the symbolism in the story of Dracula originates. It was written by the Irish author Bram Stoker and published in 1897. Stoker knew the vampire legends after years of research...there is no part of the world and no era of history that does not have its myths and legends about vampires who feed off other people's energy and blood. Observe the main elements of that tale.

Stoker's character was largely based on a man called Dracula or Vlad the Impaler, (in Romanian - Vlad Tepes) the 15th-century ruler of a country called Wallachia, not far from the Black Sea in what is now Romania (Rom = reptilian bloodlines). This was the same region that was once called Transylvania, the home of the most famous vampire legends, and the Danube River valley, which runs from Germany to Romania and into the Black Sea, is a name that comes up very often in the history of the bloodlines.

Vlad III, Prince of Wallachia, slaughtered tens of thousands of people and impaled many of them on stakes. He would sit down to eat amid this forest of dead bodies, dipping his bread in their blood. He usually had a horse attached to each of the victim's legs and a sharpened stake was gradually forced into the body. The end of the stake was usually oiled and care was taken that the stake not be too sharp; he didn't want the victim dying too quickly from shock. Infants were often impaled on the stake forced through their mothers' chests. The records indicate that victims were sometimes impaled so that they hung upside down on the stake. Death by impalement was slow and painful. Victims sometimes endured for hours or days. Dracula had the stakes arranged in various geometric patterns and the most common was a ring of concentric circles. The height of the spear indicated the rank of the victim, an excellent indication of the ritual-obsessed reptilian mind.

The decaying corpses were often left there for months. It was once reported that an invading Turkish army turned back in fright when it encountered thousands of rotting corpses impaled on the banks of the Danube. In 1461 Mohammed II, the conqueror of Constantinople, a man not noted for his squeamishness, was sickened by the sight of twenty thousand impaled corpses rotting outside of Dracula's capital of Tirgoviste. The warrior sultan turned over command of the campaign against Dracula to subordinates and returned to Constantinople. Ten thousand were impaled in the Transylvanian city of Sibiu, where Dracula had once lived. On St. Bartholomew's Day, 1459, Dracula had thirty thousand merchants and others impaled in the Transylvanian city of Brasov. One of the most famous woodcuts of the period shows Dracula feasting amongst a forest of stakes and their grisly burdens outside Brasov while a nearby executioner cuts apart other victims.

Impalement was Dracula's favorite technique, but by no means his only method of inflicting unimaginable horror. The list of tortures employed by this deeply sick man included nails in heads, cutting off limbs, blinding, strangulation, burning, cutting off noses and ears, mutilation of sexual organs (especially in the case of women), scalping, skinning, exposure to the elements or wild animals, and boiling alive. No one was immune to Dracula's attentions. His victims included women and children, peasants and great lords, ambassadors from foreign powers and merchants. 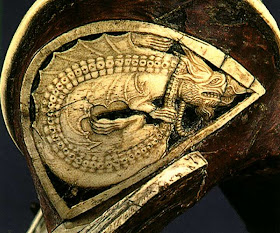 Vlad III was the son of Vlad Dracul, who was initiated into the ancient Order of the Dragon by the Holy Roman emperor in 1431. It's emblem was a dragon, wings extended, hanging on a cross. Vlad II wore this emblem and his coinage bore the dragon symbol. All the members of the order had a dragon on their coat of arms and he was nicknamed Dracul (the Devil or the Dragon). Son Vlad signed his name Draculea or Draculya or the "Devil's son" and this later became Dracula, a name that translates as something like "son of him who had the Order of the Dragon". This is the same Dragon Order that is today promoted by the British "Holy Grail" author, Sir Laurence Gardner. By the way, Queen Mary or Mary of Teck, the mother of King George VI and therefore grandmother to the present Elizabeth II, was descended from a sister of "Dracula". - 'Children of the Matrix' (David Icke) - www.aboutromania.com - 'Dracula: Between Myth and Reality' (Adrian Axinte) - www.romaniatourism.com

NOTE: There have been several anecdotes referencing reptilian draconian beings in Romania since it joined the North Atlantic Treaty Organization (NATO) in 2004. There is no date given for the scenario detailed by General Emil Streinu (below) though, I suspect, it occurred post-1989 Romanian Revolution and pre-NATO membership. Again, this not the only reptilian claim to have come out of Romania...Lon

A very interesting link about the possible connection - The Anunnaki, the Vampire
and the Structure of Dissent 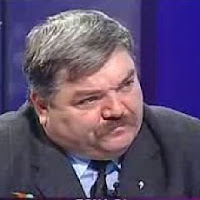 Romanian General Emil Streinu is an expert in radiolocation (radar technology) and has a doctorate in geophysical warfare (HAARP technology). He has served as the Advisor of the Romanian Parliament on unconventional issues and asymmetrical threats - Director of The Special Situations and Research Center on UFOs and Psihotronics - Founder of the Association for the Study of Unidentified Aerospace Phenomena and author of several of esoteric publications.

For many years he has claimed that the reptilian extraterrestrials exist, that they have huge underground bases/cities, but nothing more. Each time he concludes by stating “I’m not going any further on this subject”

After reading Aryan Hava's books "Inuaki, The Reptilian Inside Me" (Vol. 1 & 2), General Streinu contacted her to convey a remarkable story as she was about to publish her third book on this subject: "Anunnaki vs. Anunnaki" (or "An.unnak.ki versus An.unnak.ki"). Streinu eventually writing the book's preface.

In the introduction he speaks about a good friend of his who had seen two reptilian beings in an early morning (5:00 AM) in the Retezat Mountains (A group of mountains in the Carpathians).

His friend is also a military figure, a high ranking officer specialized in commando warfare, which asked for his identity to remain hidden. He served in Iraq, Afghanistan, Africa and Latin America (South America). General Streinu also mentioned that his friend is not a fan of neither science fiction or ufology and that he trusts his friend above any doubt.

This high ranking officer, let's call him "Colonel X", was driving back from a short camping trip, which he took alone in the mountains. He was close to Bucharest when he noticed that he was low on gas...so he pulled into a small rural gas station.

It was 5:00 - 5:10 AM, so nobody was around. Colonel X noticed a khaki Hummer with black windows parked outside the gas station with the engine on, but nobody around it. After filling up his tank, he paid and walked back to his SUV. He then noticed that the driver's door of the Hummer was opened and inside it he saw a reptilian being. The reptilian had no clothes but it was wearing military boots...it was entirely covered with green scales (like a crocodile) and had a lizard-type crest on the head. The reptilian saw Colonel X, then he got out of the Hummer, while still staring at him. He directed some sharp sounds at someone from inside the car, this time looking irritated, then got back at the wheel and quickly drove away. The car had no license plates, either on the front or back.

The Colonel looked around to see if someone else had witnessed the event, but he was alone. Then he noticed the gas station's video camera. Unfortunately, the attendant told him that the camera was "just for decoration" and had no practical use, other than scare any potential robbers. Thinking that this was a very well played hoax, he got back into the car and continued his journey.

After several miles he was still very upset by the events, when he saw the same Hummer with all four doors opened. On the shoulder he noticed two dark green reptilians that seemed to be arguing. The second reptilian was 15-20 cm (5,9 - 7,9 inches) higher than the first one. It wasn't wearing clothes or boots and had lizard-type feet and unlike the first one, it also had a tail.

On the street, trucks were passing by in both directions and the drivers were pointing at the creatures, but nobody pulled over. Then, Colonel X got his mobile phone out and took several photographs of the reptilians who seem oblivious to the situation.

After 3-5 minutes, the two reptilians got back into the Hummer and drove back, at high speed, in the direction they initially came from. The Colonel looked again at the pictures from his mobile phone and rushed for Bucharest in order to contact General Streinu and together decide what to do with the astonishing pictures.

Back in Bucharest, the phone clearly showed 11 pictures, but all of them were completely green. Together with General Streinu, they headed to a phone service company that couldn't help them either. It was like the Colonel photographed a bright green light.

For two weeks they analyzed the story in great detail and searched for witnesses, but all efforts ended up in failure.

General Streinu concluded: "Only one thing is sure: we live in a world that we only THINK we know, having a false impression that we are its masters. In fact we are only subtenants in transit, on a planet that never belonged to us and having no idea what our purpose really is..." - humansarefree.com

NOTE: here is a link to my post on The Romanian Vampires that details the legend. What do you think...could there be a connection between reptilians and vampires? Do you believe that these beings even exist? Are we starting to realize that there are other forces at play and that we are here for a specific purpose? Lon