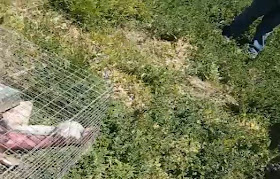 JC Johnson posts: "A look into the attack on an animal, where mostly the "Skunk Sack" and organs were removed."

The investigation took place in Fruitland, New Mexico area...probably in or very near the Navajo Reservation. This area is very active with a hominid species that appears to be thriving. Please watch the entire video and listen to JC's theory as to why the 'Furry One' killed the skunk. Fascinating video. Here is a link to the previous post - New Mexico 'Furry Ones', 'Skin-Walkers' and 'Shadow Man'...Lon 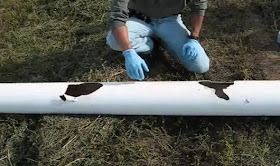 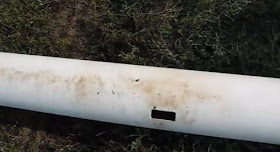 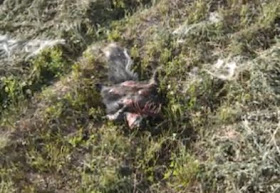 Kenney came under fire after student Wesley McKinley killed himself in April and his parents began questioning the one-on-one hypnosis sessions that took place weeks before their son died.

The report revealed that the principal had also hypnotized Brittany Palumbo five months before her May suicide. The report said that Kenney entranced Marcus Freeman twice in the weeks before the student died in an auto accident in March.

Earlier reports said Kenney performed hypnosis to help students focus in class. The school district permitted the principal to demonstrate hypnosis in front of groups in psychology class, but was unaware that he secretly had one-on-one sessions with students, according to ABC News

According to the new report, Kenney lied to school officials and investigators about his private hypnosis, but later confessed. His lawyer Mark Zimmerman said his client misspoke under questioning because of the stress.

The school district has denied there's any link between they hypnosis and suicides, ABC reported. - heraldtribune


Man struck by lightning for sixth time
A Seneca, SC man has again disproved the old adage about lightning never striking the same place twice after being struck for the sixth time on Monday. Melvin Roberts, 58, is recovering at Oconee Memorial Hospital after being struck at his home in Seneca on Monday. His wife, Martha Roberts, said that her husband was outside trying to cover his lawn mower when he was struck. Neighbours found Roberts lying unconscious in the yard.

Melvin Roberts said he was struck several times over the last several years, and in the last case in 2007, it was not even raining when it happened. Robert said, "I went to cover my chickens up, and I believe it was clear. But when I woke up, I was all bloody and burned and confused and had my little chickens lying with their feet up."

Roberts carries a scar on his head from the first time and scars on his legs from the 2007 strike. That strike left him with nerve damage to his left leg and he spent more than a year in a wheelchair. This time he has a wound on his foot and blisters on his ankles. Roberts had to give up his work as a heavy equipment operator due to injuries from previous lightning strikes that have left him permanently disabled.

He said that his love life has paralleled his experience with lightning, but that’s about to change. Roberts said, “I've been married five times and I've been hit by lightning five times. (My wife) says this is the sixth time. I'm not leaving my wife, so I'm going to have to try to do something different." - wyff4


Fountain of youth may soon be a reality
An elixir of life could soon be a reality, as scientists have discovered a new drug which they believe could reverse the effects of premature ageing and extend human life by over 10 years.

In remarkable experiments, a team of US scientists took skin cells from children with Hutchinson-Gilford Progeria Syndrome (HGPS), a rare genetic condition in which babies rapidly grow old and die at around 12 years, and turned them healthy again by using rapamycin, known as the "forever young drug".

Rapamycin, used to suppress the immune system in organ transplants, has been created from a bacterium found in the soil on Easter Island, the Daily Mail reported. Past research has hinted that the drug may have the power to extend human lifespan by more than a decade. - indiatimes

US Government sues former astronaut Edgar Mitchell over stolen Apollo 14 lunar camera
The U.S. government has sued a former NASA astronaut to recover a camera used to explore the moon's surface during the 1971 Apollo 14 mission after seeing it slated for sale in a New York auction.

The lawsuit, filed in Miami federal court on Wednesday, accuses Edgar Mitchell of illegally possessing the camera and attempting to sell it for profit.

In March, NASA learned that the British auction house Bonhams was planning to sell the camera at an upcoming Space History Sale, according to the suit.

The item was labeled "Movie Camera from the Lunar Surface" and billed as one of two cameras from the Apollo 14's lunar module Antares. The lot description said the item came "directly from the collection" of pilot Edgar Mitchell and had a pre-sale estimate of $60,000 to $80,000, the suit said.

Mitchell was a lunar module pilot on Apollo 14, which launched its nine-day mission in 1971 under the command of Alan Shepard. The sixth person to walk on the moon, Mitchell is now retired and runs a website selling his autographed picture.

He has made headlines in the past for his stated belief in the existence of extraterrestrial life.

"All equipment and property used during NASA operations remains the property of NASA unless explicitly released or transferred to another party," the government suit said, adding NASA had no record of the camera being given to Mitchell.

The suit said the government had made repeated requests to Mitchell and his lawyer to return the camera but received no response.

Mitchell's lawyer, Donald Jacobson, said NASA management was aware of and approved Mitchell's ownership of the camera 40 years ago.

"Objects from the lunar trips to the moon were ultimately mounted and then presented to the astronauts as a gift after they had helped NASA on a mission," Jacobson said.

Bonhams said in an emailed statement that the camera had been slated to be auctioned off in May when it learned about the ownership dispute from NASA. The auction house withdrew the camera from sale "pending further discussion between NASA and the consignor," a Bonhams spokesperson said.

The government is asking the court to stop Mitchell from selling the camera to anyone, to order its return and to declare that the United States has "good, clean and exclusive title" to the camera. - reuters
Lon Strickler at 2:41 PM
Share
‹
›
Home
View web version