The 'Place of Many Dead' - Devil's Lake, Wisconsin 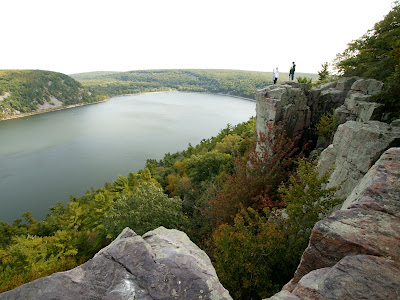 Devil's Lake of Wisconsin has its share of geological oddities such as glacier scratches on unusual rock formations and petrified sand waves of an ancient sea, but it is the Amerindian mounds that are especially interesting. Three major effigy mounds are located in Devil's Lake State Park. One in the shape of a bear and another, which resembles a lynx, are at the north end of the lake. A bird-shaped mound is at the southern end. Did the moundbuilders wish to acknowledge real animals or phantom creature forms that haunted the shores of Devil's Lake?

From nearby Baraboo (three miles north of Devil's Lake), stories were circulating in the seventies of giant ghost elephants. Or were they mastodons? August Derleth, author and follower of H. P. Lovecraft, likes this area of southcentral Wisconsin because he felt it contains "Cthulhu power zones."

During the summer of 1970, campers at Devil's Lake complained of shadowy "somethings" prowling around their tents. Department of Natural Resources personnel stated that no bears are found in the area. However, Bigfoot accounts are well known from Wisconsin. Devil's Lake is also the location of an 1889 lake monster report. Additionally, the surface of the lake is broken with the ghostly wake of a phantom canoe seen in the mists of cold, still nights. The place does have an aura about it. Folklore tells of an Indian maiden and her lover leaping to their deaths. In general, the site is said to be a "place of many dead."

When the first missionaries arrived in the Devil’s Lake area they where greeted by the Nakota Tribe, who told them about a year in which the area experienced a great drought. During this drought the Nakota Tribe remained near the swiftly drying lake, not only because it was the only source of water for miles, but also because it drew animals from all over to its shores in order to drink, providing the tribe with a stable food source. As the summer drew on and the drought continued to lower the lakes levels it eventually became two lakes, separated by a shallow strip of mud which ran through the middle. 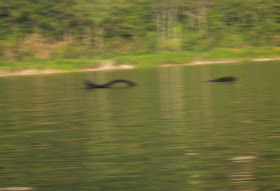 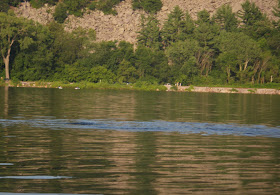 One morning the Nakota people awoke to find what they could only describe as a huge, fish like creature trapped on the strip of mud which now divided the two remaining bodies of water. The tribe described the large creature as having a long neck, small head and wide body that it thrashed and wiggled in an attempt to free its self. After several days the creature was able to free its self and slip into the deeper of the two remaining pools of lake water.

Researchers tend to vary in opinion as to what the Devil’s Lake Monster might be, some have suggested a form of giant fresh water octopus while others have looked to a more familiar face in the lake monster world, suggesting it may be a plesiosaur that found its way into the lake after the last Ice Age. Either way what ever the Devil’s Lake Monster is, or was, there has been no real sightings of the creature for some time, leaving some to speculate what ever the creature was may be long gone by now. 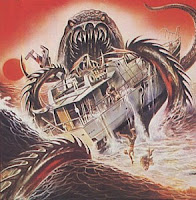 Some say that this octopus-like beast was responsible for an untold number of deaths, but the Nakota Indians tell a tale about a struggling creature which is uncannily similar to the allegedly extinct Plesiosaur.

Located in Sauk County, Wisconsin, Devil’s Lake is an eerie, mist shrouded, body of brackish water, Carved by glaciers during the last ice age, this bluff quarantined lake could generated a deep-bone chill even if it weren’t the alleged home of a pair of vicious aquatic monsters.

Originally known to the Native American Nakota Sioux’s as “M’de Wakan” — roughly translated as “Mystery” or “bad Spirit” Lake, although some insist that it simply means “sacred” — this stretch of deep, cold, salt-infested water has been known by many names over the centuries But it wasn’t until white settlers finally claimed the land in the middle of the 1800′s that the lake finally gained its current appellation: “Devil’s Lake.” It is a name, which residents claim, the lake lives up to.

One of the earliest legends involving the creature of Devil’s Lake revolves around a Native American Indian chief who assembled an expedition of young warriors to go on a late night hunting trip on the fauna fertile lands across the lake. The full moon reflected off the night blackened waters as the young men and their leader slipped the canoe the water and began their late night trek.

Suddenly, a flurry of tentacles ripped through the surf, capsizing the canoe and pulling the thrashing, terrified men beneath the brackish water. Although no one survived this ill-fated expedition, their screams alerted fellow tribesmen, who rushed onto the beach and were able to bear witness to this horrific event in grisly detail due to the moon’s lingering glow.

The surviving warriors of the tribe, in order to pay homage to their fallen brethren — as well as appease what they believed to be the demon of the lake — held a festival every year, during which gifts and animal sacrifices were thrown into water.

The tradition continues to this day, although nowadays the annual event is treated more along the lines of an annual picnic that celebrates tribal legends and traditions. 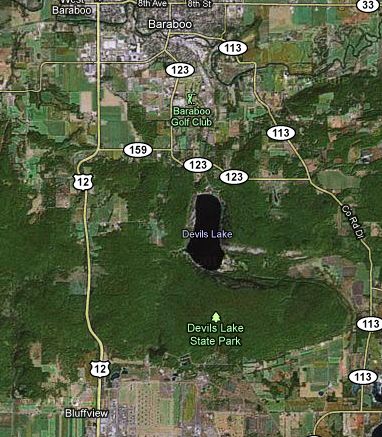 As if a colossal octopus-like beast weren’t more than enough monster for one body of water, when the first Christian missionaries arrived on the shores of Devil’s Lake they were greeted by the Nakota tribe who told them about yet another creature that was revealed in the year of the great drought.

The Natkota’s remained near the swiftly drying lake, not only because it was the only water source for miles, but also because the animals upon which they fed were forced to expose themselves in order to drink, providing the tribe with an ample — and relatively simple to hunt — food source. As the summer progressed the lake grew smaller and smaller, until it eventually became two lakes, separated only by a shallow strip of mud, which ran through the center.

One morning the Nakota’s awoke to find what they described as a huge, fish-like creature, which they referred to as “Hokuwa,” trapped on the narrow, muddy strip of exposed lake bed.

The tribe watched as the apparently amphibious animal, which they described as having a large body, long neck and small head thrashed and writhed in an effort to free itself from its drying perch for days.

The sight filled the Nakota with both awe and terror and not even the bravest warrior dared to approach the creature, which they believed it to be an Unktizina — the vile progeny of the evil spirit Unk and the lizard beast known as UNKCEGI — for fear that the spirit’s wrath would bring on even greater hardships than just the drought. Eventually the animal was able to free itself and (presumably) make its way back into the deeper portion of the lake. - americanmonsters.com
Lon Strickler at 3:46 PM
Share
‹
›
Home
View web version