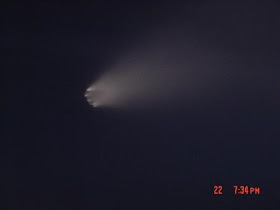 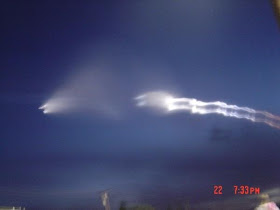 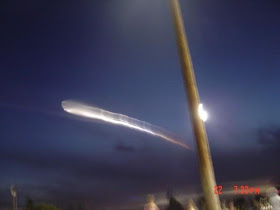 'What is that?'
MUFON CMS - Simi Valley, CA - 10/22/2006: I'm not sure what it is that I captured on camera but I thought I'd send the pictures in the hope that you would be able to help identify exactly what it is.I took these pictures a few years back in Simi Valley,Ca while watching my sons football practice. I first noticed a bright light in the sky so I grabbed my camera and by the time I was able to take the first picture it had already started to streak across the sky then turned into about four little lights then disappeared. I was able to capture the four attached pictures. Then when I got home I was on my balcony telling my neighbor what happened when I saw two helicopters a jet flying around they did two loops around where i saw the object then left.I was told that it was some kind of rocket that's why i have never sent the pictures in before but every time I see them it get me curious as to what it is that I captured on camera. If you could with my curiosity I would appreciate it.


Search for Osama Bin Laden's body
A self-proclaimed "expert treasure hunter" claims to be conducting an underwater search for Osama bin Laden's remains to prove that the al Qaeda leader has in fact been killed.

As CBS is reporting, Bill Warren says he is using his 180-foot-long boat, currently docked in western India, and high-tech equipment able to detect anything underwater to locate bin Laden's corpse, which was quickly buried in the North Arabian Sea on May 2. "I'm doing it because I am a patriotic American who wants to know the truth," Warren, who plans to photograph and videotape the corpse as well as conduct a DNA test, told the New York Post. "I do it for the world."

The expedition -- which will utilize "[the same technology] they found the Titanic with" -- will reportedly be funded by private investors in Chicago and New York, though Warren, who is between 59 and 67 years old based on varying media reports, refuses to divulge other details. The California resident went on to dismiss concerns that bin Laden's body might be at least partially decomposed already. "A fish can't get at it," he is quoted by CNN as saying. "He's in a sealed, Navy burial bag."


'Killer shark' reported off the coast of Cornwall
In a scene reminiscent of the film Jaws, a fisherman out on the water has said he was nearly toppled from his wooden boat by the man eating shark.

The angler was out looking for mackerel a mile off the coast of St Ives, when suddenly his boat was rammed by the 7ft fish.

As it swam away – passing another boat – he identified it as an oceanic white tip, a shark famed for feeding frenzies around shipwrecks and plane crashes.

While the prospect of this killing machine swimming around our coast sounds terrifying, before any one flees the water, experts are already pouring cold water on the reports.

They claim the shark, normally found in tropical waters, has never been seen this far north – and even if it has entered our waters it will be virtually comatose by the cold.

Nevertheless the fisherman are adamant.

One of them, a 60-year-old man who has been fishing in St Ives Bay all his life, said the shark rammed his boat.

He spotted the distinctive mottled white tipped dorsal fin zig zagging towards him.

He said: "I was interested so I stood up to have a good look at it.

"As I was looking over the side of the boat, it just slammed into it. Then its head came out of the water by about a foot.

"It was that close to the boat that it slammed the side with its body and tail. It came as a bit of a shock."

About 10 minutes later two fisherman on another nearby boat said they were circled by the shark.

The Mayor of St Ives, Ron Tulley, sought to play down any threat.

He said: ''There is no immediate danger. Sea creatures do tend to come and go so it has probably just blown off course.

"I am sure it will find its way back to where it is meant to be.”

The harbourmaster of St Ives, Steve Bassett, said: "To be honest it's getting a bit like the film Jaws now.

"People are speculating and starting to panic."

Matt Slater, curator of the Blue Reef Aquarium in Newquay, said the reported sightings were "exciting" and, if proven, would be the first of the species in UK waters.

"It is fairly unlikely that one would come up here, but it is possible," he said.

"If there was one out there I wouldn't greatly fear it would attack a human. It is too cold for it and because of that it would have a slow metabolism – it would not have a massive appetite and there are plenty of mackerel and other fish around for it to eat.

"People should not be afraid of this animal – they have a bad reputation but divers go in the water with them regularly. There are other species which are far more dangerous."

It is not the first sighting killer sharks in Cornwall, but none have been confirmed and some have been unearthed as hoaxes.

In July 2008 there was a sighting of a Great White, never officially recorded in British waters before.

In 2005 there were reports of possible Mako, Maori for man-eater, shark sightings.

There are more than 30 different shark species which are either resident or seasonal visitors to British waters. - telegraph


Malawian Man Sentenced For Wrongly Predicting End Of The World
It's bad enough that the world didn't end on May 21 for followers of Christian fringe group leader Harold Camping, but things got worse for a Malawian disciple who pleaded guilty for distributing false leaflets about the end of the world.

"Police opened a case for him for circulating false documents that threatened the peace and security of citizens," an official with the magistrate's court in Chitipa district told the AFP.

A judge released Mwamben on bail, but ordered him to come back for a hearing after May 21 to prove that he'd given out wrong apocalyptic information.

Camping, who suffered a stroke over the weekend, became a short-lived media sensation in the run-up to May 21 -- the day he said would be the Rapture.

HIs followers plastered the cities in the U.S. and around the world with billboards proclaiming that humanity's time on Earth was short.
Lon Strickler at 2:59 PM
Share
‹
›
Home
View web version