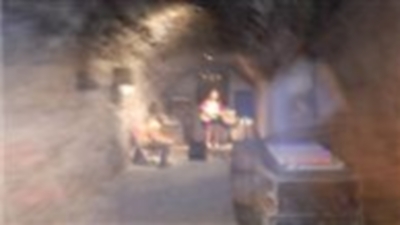 Ghostly image shocks wedding guests
People at a wedding reception at the Newman Wine Vaults in St. John's believe they caught an image of an uninvited and otherworldly guest.

Newlyweds Matt White and Danielle Hann said one of their friends was shocked by the digital image she took at the June 18 event.

On the right-hand side of the photograph, some see a figure that seems to be wearing a white top and floating in the air.

"Somehow it's not as creepy in the daylight," said White.

But it still makes Hann uneasy.

St. John's folklorist Dale Jarvis said it might be explained away as a reflection or a light flare, but he added that the Newman Wine Vaults does have a haunting history.

"It is one of those places that continually generates new ghost stories. So, this is part of that tradition for the space," said Jarvis, who has collected many St. John's ghost stories.

Jarvis is the organizer of the city's "haunted hike" – a tour of the downtown area that recounts many of the stories he has been told.

The Newfoundland and Labrador Heritage website said the history of the wine vault is unclear.

It's believed to have been built in the early 19th century, and was used by the English mercantile firm Newman and Company to age port wine from Portugal in St. John's – a tradition that began in the late 17th century and continued until the late 19th century.

The building is on a long-term lease from Newman & Company to the Newfoundland Historic Trust.

The Trust has developed the vaults into a museum dedicated to recounting the history of Newfoundland's liquor trade. - ca.msn


New Comet Found; May Be Visible From Earth in 2013
There's a newfound comet closing in on the sun, and when it gets here in 2013, you may be able to see it with your naked eye.

Astronomers stumbled upon the icy interloper on June 5 while searching for potentially hazardous asteroids.

Equipped with the world's largest digital camera—1,400 megapixels—the University of Hawaii's Pan-STARRS team snagged a faint image of the odd object while it was more than 700 million miles (1.1 billion kilometers) away, between the orbits of Jupiter and Saturn. (Explore an interactive solar system.)

"Almost everything we find is an asteroid, but this object was suspicious," said Richard Wainscoat, co-discoverer of the comet and an astronomer at the University of Hawaii.

"Unlike asteroids, which appear point-like in images, the telltale sign that gave it away was its fuzzy appearance."

By March 2013 the comet, named C/2011 L4 (PANSTARRS), is expected to come within 30 million miles (48 million kilometers) of the sun—closer even than the innermost planet, Mercury.

When the comet makes its closest approach to the sun, more of its ices will vaporize, adding to its hazy envelope of gas and dust and producing the familiar tail.

This denser envelope, or coma, should boost the comet to peak brightness, making it potentially visible to the naked eye low in the western horizon just after sunset.

While there is no danger of collision with Earth, preliminary calculations of the comet's orbit show that this may be its first and final trip through the solar system.

"It may be coming around the sun for the first and only time, only to be ejected from the solar system, never to return," Wainscoat said.

"Since we don't have a lot of data on it, we really don't know the orbit well enough right now, and it will take up to two months of observations to find out."

Astronomers believe C/2011 L4 may be a runaway from the Oort cloud, a reservoir of billions of hibernating comets that orbits about 100,000 times farther than the distance between Earth and the sun.

"The current path of the comet is typical of those thought to be originating from the Oort cloud, showing it coming up from the south—underneath the Earth—going up the back side of the sun and into the north sky, very nearly perpendicular to the plane of the solar system," Wainscoat said.

The fact that it's going around the back of the sun from our point of view may ultimately affect the comet's visibility, but a lot will depend on how close the body actually gets to the sun.

Also, whether the comet is north or south of the sun when it reaches peak brightness will determine which hemisphere on Earth gets the better view.

For now, "we think it will be an easy binocular target, but it may very well make it to naked-eye level, and there is even a potential that it may be visible during the day," Wainscoat said.

"But it's just really too early to tell. We may not know for sure until only a few weeks before it gets here." - NatGeo

Balducci has listed an old patio rocking chair, purchased at HomeGoods some 10 years ago, on eBay with a starting bid price of $25,000. But this isn't just any old rocking chair; it's one that bears the image of what Balducci believes to be Jesus Christ.

Balducci first noticed the anomaly in February as he and his wife were preparing to throw away a pair of rocking chairs that had sat in their backyard for years. The chairs' wood was rotting and their supports were broken. White paint flaked off anytime the chair was moved or touched.

His wife had thrown away the chairs' rain-soaked cushions a few days before. Balducci stood outside on the back patio, smoking a cigar and staring at the pair of barren, unusable chairs when something caught his eye. In a paint-chipped, rotting knot of wood near the base of one chair's backrest, Balducci saw the face of Jesus as he knows him to be. - ocregister


Finding Bigfoot...Isn’t
We watched the purity of ghost research descend into the depths of hell with the deluge of “reality” television like Paranormal State and other “ghost hunter” shows. Now the steady decline of Crytpozoology gets its day. Shows like River Monsters and Destination Truth initially gave us hope that the Crypto world would raise the bar for “reality research” by doing actual field work and seeming not to fake results. The latest entry, “Finding Bigfoot” looked promising as well because it was not only presumably going to contain Canadian Content but also not focussed on handsome hunks with perfect hair. Continue reading at Finding Bigfoot...Isn’t 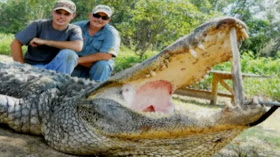 "Something I wanted to do was hunt something that could hunt me and alligators seemed like a challenge,” said McCathern, who has hunted since the age of six.

But huge reptiles are a far cry from hunting dove and quail, which McCathern said he hunts year-round.

As McCathern started looking for places he could hunt the large reptile, he checked the internet and typed two words -- monster alligators. One place that kept showing in the search was the Trinity River. Yes, the Trinity River, which criss-crosses much of North Texas.

Guided by experts two hours outside Dallas in Leon County, McCathern got his shot when a monster gator popped his head up out of the water just long enough for McCathern to pull the trigger.

"It went right in the brain... it was a perfect shot, probably my luckiest shot.”

Weighing a whopping 900 lbs and stretching 14 ft long, McCathern's gator may be the largest ever killed in Texas history.

"They took him to the town square in Crockett and just caused a traffic jam,” said McCathern who admits his testosterone has been "very high" since the kill.

"My wife probably doesn't like it as much as she should, I've been pretty big since I killed this alligator.”

It’s the kind of trophy that makes legends of hunters, though McCathern has proven as a lawyer he’s quite the angler, landing the biggest fish in town as a client, Jerry Jones and the Dallas Cowboys.

McCathern said the plan is to have the gator mounted and placed on a wall in his office where other hunting trophies adorn the walls.

Is his conquest of the giant reptile proof positive lawyers are truly sharks?

McCathern laughs at the idea, along with his new nickname.

"My name is Levi G McCathern...and everybody says it's G for Gator.”

It is against the law to hunt alligators along the Trinity River, but McCathern had special permission from a private property owner to go on the hunt after many of the rancher's cattle were gobbled up by the behemoth reptile. - NBCDFW


Vinny getting ready for his next victim!