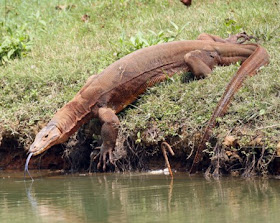 Nile Monitors, lizards that can grow up to 9 feet in length but are normally only found in Africa and Asia, are now invading parts of South Florida.

Nine of the formidable looking creatures were recently spotted in Broward and Palm Beach counties, according to the Florida Fish and Wildlife Conservation Commission, a group that fears the monitors could undermine the natural ecosystem of the area if they continue to grow in number.

“This is a high-priority species for us,” Scott Hardin, who coordinates nonnative species programs at the commission, said in a statement earlier this week.

People are being warned that the huge lizards — equipped with long tails that they can use like whips, powerful jaws and teeth, and sharp claws — get extremely nasty when threatened, and thus attempts to capture the creatures are discouraged.

“Nile monitor lizards may exceed 7 feet in length and are known to be very defensive when cornered, so the FWC discourages attempts to capture the lizards. They are known to be more active during the hot summer months, explaining why reports have increased.”

What are the FWC’s plans for handling the monitor outbreak?

“We plan to go after them aggressively to either try to eradicate them or suppress their numbers if they are determined to be established.” - palmbeachpost 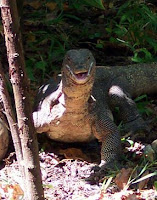 Giant lizards being hunted down in South Florida

They're not Godzilla size but large, nonnative lizards in two South Florida counties are being hunted down after alarming humans, including a homeowner who found one that slipped through a doggie door.

"This is a high-priority species for us," Scott Hardin, who coordinates nonnative species programs at the commission, said in a statement Tuesday. "We plan to go after them aggressively to either try to eradicate them or suppress their numbers if they are determined to be established."

The commission urged residents to report sightings to 888-IVE-GOT1 instead of trying to deal with them personally.

"Monitor lizards may exceed 7 feet in length and are known to be very defensive when cornered, so the FWC discourages attempts to capture the lizards," the statement said. "They are known to be more active during the hot summer months, explaining why reports have increased."

Wildlife officials believe residents of South Florida who collect exotic animals as pets released the animals into the wild, either after the animals got too big or because they just didn't want the reptiles anymore, nbcmiami.com reported.

The commission said it was worried the lizards would undermine the natural ecosystem of the area.

"Nile monitors are large, predatory lizards native to Africa," it stated. "This species nests around water, and the FWC is concerned about potential predation in bird rookeries."

A population of Nile monitors is already established in an area of Cape Coral, on the southwest coast of Florida, it added.

Florida and the commission have their hands full dealing with wildlife issues. Nonnative pythons are spreading across the state and alligator/human incidents increase this time of year. - MSNBC 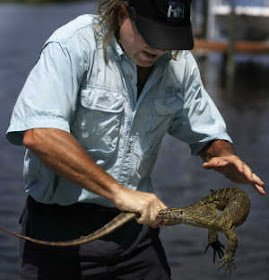 Nile monitor lizards invaded Florida and they're winning the battle

The biology professor from the University of Tampa bent down to the floor and pulled out of a black trash bag a fork-tongued, 5-foot-long, flesh-eating African lizard.

It was big, dead and about to be cut open. The professor dropped the lizard on a long plastic tray in the environmental resources building here. The body hit the counter with a thud.

These things live here, thousands of them, in this sprawling city in the southwest corner of the state. They're not supposed to live here, of course, which is why scientists like Campbell call them an invasive species.

Invasion implies a war, which is appropriate. That's what this is.

This particular conflict has been going on for almost a decade now. The battleground is the city's more than 400 miles of man-made canals.

The lizards' weapons include: sharp, snake-like teeth, long, muscular tails they use as whips, and claws that look like the sinister pendants of voodoo necklaces. They can run up to 18 miles per hour on land and swim under water for an hour at a time.

What do we have? We've got traps. Metal traps rigged with rancid hunks of chicken backs. And we had vigilance.

Here, though, is the latest development in this ongoing struggle: Cape Coral, so reliant on real estate, has gone in the past couple years from speculative fever to spectacular failure. This is a city in retreat. Water-logged phone books bake in the sun on the stoops of abandoned homes. The signs on the dying lawns say what's gone wrong: FORECLOSURE, SHORT SALE, BANK OWNED.

This just in from the fighting at the front:

"At this point in time," said Campbell, the Tampa professor, "the monitors are winning."

The story of how they got here starts with how we got here.

Once upon a time this was saw palmettos and slash pines and mangrove swamps. Hardly anyone lived here. Then came air conditioning and two brothers from Baltimore who had made a fortune hawking hair products decided in the late 1950s to start selling subdivided Florida to pasty-skinned Northerners.

Around 1990 is when people started seeing … what was that?

The Nile monitors, Varanus niloticus, are here for the same reason the Brazilian pepper trees are here, and the palms from Asia, and the pines from Australia, and the fish from Central America visible in the canals eating the torpedo grass, and also the pastel stucco 3/2 on Surfside Boulevard.

We put them here.

Local legend has it that a pet store went bankrupt sometime in the '80s and the proprietor let loose a gaggle of monitors in an area where, back then, almost nobody lived. Another theory is that wholesale distributors of exotic pets dumped monitors on purpose in the hope that they would procreate and provide a steady inventory to later be caught and sold. A third idea is that a series of owners over the years bought monitors when they were still small and then couldn't or didn't want them anymore when they began to grow into small dinosaurs.

This much is certain: All the canals weren't good just for luring buyers of homes.

The biologist got $50,000 in grants from state and federal wildlife foundations to come to Cape Coral for two years in parts of '03, '04 and '05, to trap the monitors, study the monitors and maybe even eradicate the monitors.

They sometimes hunt in packs.

Their disposition is disagreeable.

They live an average of 12 years.

Smaller females, say 3 feet long, once a year produce clutches of six or so eggs. Bigger females, close to twice that size, can lay up to 60.

In their native Africa, where they live in burrows on the banks of rivers, they have a natural predator, but there aren't any crocodiles in Cape Coral — only the occasional gator or metal trap.

But the main thing Campbell learned?

Eradication was an overly optimistic aim.

"Nile monitors," he wrote in his final report in '05, "continue to horrify the residents of Cape Coral by climbing on their houses, attacking their pets and scaring their children. … They have the potential to devastate native fish and wildlife populations."

Monitor stories started to hit the local papers. One couple said they believed a monitor ate their elderly cat, leaving behind on the bank of the canal only his white paws and black tail. Another woman was sitting in her backyard and saw a monitor run by with a dying baby owl jammed in its jaws. She gave chase with a flower pot.

It didn't happen. What did happen was the economy started to turn.

Over these past couple lean years, the city has had one man in the environmental resources division who devotes approximately 30 hours a week to trying to trap monitors, and two more who help when they can. It's reactive, limited "bait and wait," better than nothing.

But the program relies on calls from citizens.

The eyes and ears of a city that's shrinking.

The population of Cape Coral, according to the city, peaked a year and a half ago at more than 177,691. It's now almost 10,000 less. The people here say the dip feels steeper than that.

Here's where the lizards come in.

"The less people here," said Harry Phillips, a biologist for the city, "the less sightings we have."

"In this economy," Phillips said, "there isn't going to be a widespread trapping effort right now."

"That's kind of been the most frustrating part of this," said Scott Hardin, the exotic species coordinator for the Florida Fish and Wildlife Conservation Commission in Tallahassee. "There's no pot of money."

A widespread eradication effort, said Rick Engeman, a biologist at the National Wildlife Research Center in Colorado, might cost $70,000 per trapper, per year, for salary and equipment. And it would require multiple trappers for multiple years.

By now, Phillips said, the city's monitor population could be 1,000.

Cape Coral in the summer.

It's ghastly hot and sweat-stain wet. The snowbirds go home. It's no place to be. This is when we slow down and wait for relief.

Not the Nile monitors.

They like it like this, the hotter, the wetter, the better. They're only here because we were here first, but being in this city right now, looking at us, then looking at them, you start to wonder: Do the invasive Nile monitors like living here more than the people who are trying to trap them?

They're down there, in the man-made canals, and you might not see them, but you sure see their burrows, deep holes dug into the dirt on the banks, and if you traipse around all that Brazilian pepper and cabbage palm they'll smell you before you see them.

This, for them, is the part of the year when they're most active. They're moving, eating, looking for mates. They're making more babies. - tampabay.com
Lon Strickler at 4:00 PM
Share
‹
›
Home
View web version