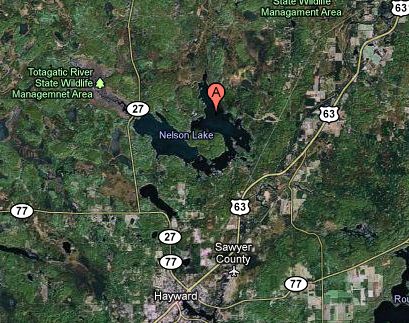 I received this email last evening from a young man in Sawyer County, Wisconsin who claims to have witnessed two Bigfoot, an adult and juvenile, while fishing:

Sir - I am writing about a sighting I had on June 26th around 8:00 pm at Nelson Lake, Wisconsin. I was fishing from my canoe about 30 yds. from the shore near Tanning Point when I noticed a whimpering sound. It was coming from the woods at the shoreline. It sounded like a dog whining, so I stopped what I was doing to watch the woods to see if anything appeared. After a few seconds I saw a child scampering from the woods. I didn't get a very good look but the child had very thick brown hair all over it's body and was very small (human toddler size). It quickly showed itself then bolted back towards the woods.

I sat there in shock. But within seconds I heard three distinct and angry 'grunts'. I then saw a large ape-like head rise above the lower tree boughs. The eyes were barely visible but I could tell that it didn't want me there. That was enough for me so I started to paddle towards the north shore when all of a sudden I heard a loud 'plop' then 'splash' from behind the boat. I turned around in time to see another rock heading in my direction. It was many yds. from me but I got the message.

I was shaking from the time I witnessed these beasts up until a few hours later when I was in my home office pondering what I had seen. I think it may have been Bigfoot. I Googled 'Wisconsin Bigfoot' and your blog came up. Was this a Bigfoot? I'm not an outdoorsman though I enjoy canoeing and fishing. Have there been other sightings in this area? Is there a danger? I appreciate your help.

I am a state employee so I would prefer my identify remain confidential. Thank you.

According to the Sawyer County Sheriff’s Department, two deputies responded to an alleged Bigfoot, or Sasquatch, sighting on Highway 63 just south of Seeley on the evening of Jan. 3.

Since then the sighting has been the topic of conversation in that small community, with multiple reported sightings being called in to the Sawyer County Record office since.

Chief Deputy Tim Zeigle confirmed that two deputies responded to the call, only to find footprints and hair at the site. But “unless Bigfoot was wearing boots,” Zeigle laughed, “I think it’s pretty much a prank.

“A lady called in and said ‘You probably think I’m nuts, but I’m not … I have not been drinking.’ She reported seeing a Bigfoot or someone dressed in an ape suit on Highway 63 near Stark Road,” Zeigle said. “We sent a couple officers up there and what they found was a set of foot tracks going from the road to the timberline and back to the road and they also found a long, black hair.” He affirmed that there have been no sightings since then.

But the story takes a curious turn from there.

According to another reported sighting obtained by the Record, a Wausau man, who wishes to remain unnamed, and his nephew were snowmobiling on a trail just southwest of Seeley when they saw something unusual cross the trail.

“I don’t know what I saw, but my nephew and I both saw something very real,” he said. “We only saw legs from the hips down as it was caught in the headlights of our snowmobiles. It stepped out of the woods, walking upright, and stepped across the trail right in front of my nephew who was ahead of me 20-30 feet.

“The legs were long (and) covered with long dark hair,” he continued. “My first thought was it was a drunk walking through the woods after leaving the Sawmill Saloon, but that makes no sense. We were quite a ways west of the Sawmill and there is no trail or crossing anywhere near there for someone to be walking.”

After gunning their snowmobiles past, the two turned around to explore the area and find tracks. But they had not marked the spot with a landmark and were unsuccessful at finding any sign when they returned to the area.

“We saw these legs for only a very brief moment, but again, it was very real,” he added.

Following up on the sighting, a number of possible theories have been revealed.

Cindy Ferraro of the Sawmill Saloon said that one potential explanation is that something was roused when the managed portion of the Uhrenholdt Memorial Forest south of Highway OO was cleaned up a few months ago. She said a friend who lives in the Seeley Hills area has reported unusual behavior coming from her dogs lately; they seem to be agitated by something out of the ordinary.

NOTE: I believe Seeley, Wisconsin is near Nelson Lake, northeast on Rt 63. Here is a link to a previous sighting reported to the BFRO - Man recalls encounter at a cabin on Nelson Lake...Lon
Lon Strickler at 3:11 PM
Share
‹
›
Home
View web version