The International UFO Congress (IUC) will hold its 20th convention in Scottsdale at the end of February.

Maureen Elsberry, Marketing Director for Open Minds Production, said the event moved to Arizona this year because the group wanted to expand the audience.

Open Minds Production is a group dedicated to investigating and reporting extraterrestrial phenomena, according to their news release.

“We wanted to expose the event to everyone, not just UFO buffs,” Elsberry told ABC15.

Since the organization was established in 1991, it has hosted an annual conference in Laughlin, Nevada. This year UFO enthusiasts will descend on Fort McDowell Resort & Casino near Scottsdale, February 23-27.

The conference is expected to host over 20 speakers and international exhibitors, who present on UFO phenomenon. According to the IUC website, topics include government cover-ups, exopolitics, crop circles and alien visitation.

Among the presenters this year is journalist Leslie Kean, who will share excerpts from her new book, “UFOs: Generals, Pilots, and Government Officials go on the Record,” which includes ex-Arizona Governor Fyfe Symington’s sighting of the Phoenix Lights, a mass UFO sighting in 1997. Frances Barwood, former Phoenix city council woman during the Phoenix Lights incident, will reportedly share her struggle to represent citizens who wanted to investigate the event.

Panels of astrophysicists, nuclear physicists, abductees and former top-secret-clearance military are among the other presenters at the five-day conference. 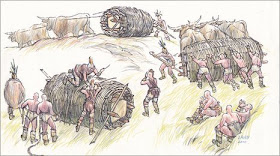 New theory on Stonehenge transport from Wales
BBC - Island-based designer and engineer Garry Lavin has set out to revolutionise ideas on how the ancient monument of Stonehenge was built.

The current accepted theory is that each three-quarter tonne stone was rolled for more than 200 miles on logs, but Mr Lavin disagrees.

He thinks the historic monument could have been built using wicker basket constructions to roll the boulders all the way from Wales.

"I constructed a 0.5-metre diameter structure in hazel and willow into which I placed a sharply rectangular 40kg stone from a collapsed dry stone wall," he said.

"I packed the gaps inside with reeds and rolled it down a hillside. The stone fell out at the bottom but my construction was still intact.

"The project was then taken to the edge of the local canal and pushed in and it floated with about an eighth of the mass protruding above the water, but easily towable along the canal."

So could this really have been the way our ancient ancestors chose to achieve such an incredible feat of engineering as Stonehenge?

Mr Lavin says woven structures were used widely at the time so it makes sense to assume they could also have been used in this way.

In past experiments Mr Lavin succeeded in moving a large one-ton stone in a wicker cage that he had made himself.

This year he will try to move a five-ton stone during the Summer Solstice at a time when the eyes of the world are firmly fixed on the Stonehenge monument.

"I have no doubt a four-fifths of a tonne stone could be moved great distances by surprisingly few people. The method of pulling rope like a giant bobbin creates leverage that puts the process streets ahead of other theories."

"I look forward to getting an opportunity to float our bluestone replica down a river and maybe across the Severn estuary. We've done the maths to determine the ratio of wood to stone needed to suspend it in water."

Mr Lavin hopes the project will expand people's understanding of those who lived in Britain over 5,000 years ago. He says he wants to "put some flesh on a society whose achievements rival or maybe even surpass those of the very familiar Romans in Britain".

This intriguing story has now been reported on many websites around the world and has been translated into numerous languages- so it is possible Mr Lavin will have an international audience as he attempts to revolutionise established thought on the building of one of England's most famous heritage sites.

NOTE: honestly, this is the best and most probable theory I had read...Lon


Dreamworks Hear VOICES FROM THE DEAD, Houdini & Doyle Investigate…
obsessedwithfilm - The X-Files was among the most successful television programmes ever made. Based on certain strands of mythology in Ufology and other supposed paranormal phenomena, at its heart was the relationship between “the believer”- Special Agent Fox Mulder- and “the sceptic”- Special Agent Dana Scully- it became synonymous with the 1990s and helped inspire a rebirth in interest in all manner of conspiracy theories, from the intriguing to the outright barmy. Some fifteen years later, it appears that the prolific American screenwriter, J. Michael Straczynski, is keen to relive a similar relationship from history- that of illusionist, Harry Houdini, and author, Arthur Conan Doyle.

In Straczynski’s new script, Voices from the Dead, the one-time friends are charged with solving a murder case in New York City with the help of a psychic. Now, while this may seem more than a little far-fetched, Doyle did indeed investigate crimes in his day- his efforts freed two innocent men- as well as being deeply involved in- and convinced of- spiritualism. Houdini, conversely, spent a great deal of his time investigating the fraudulent methods of the psychic’s, and it was this that ultimately ended the friendship of the two men.

Straczynski is riding a big screen high at the moment having scripted the, broadly speaking, well received The Changeling and the cultish Ninja Assassin, after a long and respected career on numerous television writing teams. Though it is unknown, thus far, who will be charged with directing or production duties at this stage, the script has been picked up by Dreamworks, apparently with a view to beginning pre-production towards the end of the year. The news, perhaps, implies a future trend in revisionist tales about 19th century authors as it will follow a film about Edgar Allan Poe starring John Cusack, in which he too is made the unlikely investigator of a murder mystery.

No joke. According to a survey published on Wednesday by the Russian Center of Public Opinion Research, Thirty-two percent of Russians reject a heliocentric solar system, believing instead in Ptolemy’s 2000-year old geocentric model.

The survey highlighted scientific superstitions among Russians and was released as President Medvedev called for a revival of the lunar and deep space programs that brought Russia out of the industrial age and into the space age decades ago.

The same survey also found 55 percent of Russians believe that radioactivity is a human invention, which betrays a misunderstanding of how X-Rays work.

A further 29 percent also believe humans lived in the era of dinosaurs, much like the Flintstones. The survey found women more likely (though it does not specify by how much) to believe in such superstitions than men.

The survey was conducted in January among 1,600 people in different regions with a 3.4% margin of error. Discounting the fact that some of them could’ve been trolls, a large percentage of those who participated in the survey are either old and senile, or completely ignorant.


Teenage girl collapses and dies after first kiss
telegraphJemma Benjamin, 18, was kissed by fellow university student Daniel Ross, 21, at his home after a night out together.

But Miss Benjamin suddenly slumped onto the sofa - and died in front of Mr Ross's eyes.

The inquest heard Jemma died from SADS, a rare heart condition which kills 500 people in Britain each year.

Mr Ross, who had known Miss Benjamin for three months, tried desperately to save her before paramedics arrived on the scene.

But the inquest heard nothing could have be done for Miss Benjamin, who was described as a "picture of health".

Mr Ross told police that he and Miss Benjamin had been friends for three months - but that was the first time they had kissed.

He said: "It was not a sexual relationship but we saw each other a couple of times a week.

"We were going to go to a bar for some food and went back to my house for a credit card which I had forgotten.

"We were talking and ended up kissing in the hallway by the front door.

"We went into the kitchen and then the living room and Jemma sat down on the sofa."

Mr Ross said that Miss Benjamin's eyelids "suddenly began to droop" and her mouth started to froth before she collapsed at his student flat in Treforest, Pontypridd, South Wales.

He said: "I rang her mother to see if she had epilepsy. She fell in and out of consciousness."

He rang 999 and was given CPR instructions on the phone by a Welsh Ambulance Service control operator but he was unable to revive her.

Det Con Richie Andrews, who interviewed Mr Ross, told the inquest: "Jemma and Daniel started chatting and ended up kissing each other - it was possible that it was the first time they had kissed."

Miss Benjamin's father told the hearing that he thought his daughter and Mr Ross were "just friends".

He said: "Jemma was very shy and timid."

The hearing was told Miss Benjamin was athletic and sporty but was "stressed" about forthcoming exams in sports science.

Her mother Charlotte Garwood said Miss Benjamin - a long distance swimmer and hockey player - was "a picture of health one minute and taken away from me the next".

She said: "I am not able to put into words how much I miss her."

Mr Ross has since finished his studies at the University of Glamorgan in Pontypridd, South Wales, and returned to his home city of Birmingham.

A post mortem examination by pathologist Dr Jason Shannon could find no medical reason for her death in April 2009.

The hearing was told she had no history of cardiac problems.

Glamorgan coroner Peter Maddox recorded a narrative verdict at the inquest in Aberdare.

After the hearing, builder Mr Benjamin, 38, of Llantwit Fardre, South Wales, said: "We were shocked and devastated that such a fit girl as Jemma should have died."

He said he was setting up an appeal to raise £5,000 for a heart screening programme for young people in the area through the charity CRY - Cardiac Risk In The Young.
Lon Strickler at 2:59 PM
Share
‹
›
Home
View web version