Odd Anecdotes: Dark Entities, Something Chased The UFO and Did I See A Fairy? 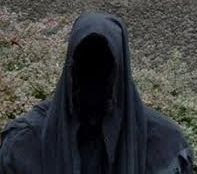 The following anecdotes were either forwarded to me or recently posted elsewhere:

Email received: Hello, my name is Greg. I do not know what I have experienced but recently I have been receiving phone calls from 11 digit single numeral phone numbers with no voice. The calls last exactly 10 sec then end. I have also been receiving 4 digit number calls. When I was younger there were a couple of events. One time I saw something that was completely black and didn't have eyes. A day or so later I saw a weird figure outside my window. It just stared at me. It had a weird looking face with 2 large black eyes, no nose and an enormous mask (it seemed like it was a mask) but it rubbed its face and blinked the rest of the head...seemed to be covered with a hood of some sort.

I didn't have any other sightings at that time but I heard a lot of noise most nights. It got so bad I refused to stay there with my family. Another event happened not so long ago. I was asleep and woke up as if I didn't have a choice. When I looked I saw a large black figure over me with red eyes that glowed yellow at the edges. I couldn't move or scream. When I finally rolled out of bed and slowly crawled though my house. I heard no noise. My family was staying with me but no one was around as if they had gone. I laid on the floor for hours until I lost consciousness. When i woke I was back in my bed undressed. i had asked my family if they went anywhere before I got up. They said they went outside for only a few seconds to get more clothes out of the car. If you would have info on this please let me know.

SOMETHING CHASED THE UFO

MUFON CMS - unedited: My friend and I would walk our dogs late at night for a good hour or two over the summer. It was around 1 am and we both walked to our neighborhood's elementary school which happens to be the half way point to both our houses, that's were we split up to each walk home. I was walking my dog home and was pretty close home, just about a block away. I was looking at the sky (which was very very clear) thinking to myself how nice it should be tomorrow. Right as I was looking at the sky I saw a rather large disc over head fly by extremely fast. I'd say it was about the size of the average Frisbee held above your head at arms length. The whole thing was glowing, the center was more white and bright and as it got to the edges it was more of a mustard yellow. I saw it for a good 2-3 seconds before it disappeared. After seeing that I knew I just saw a UFO and by UFO I mean I knew it wasn't of this Earth. I stood there for a good minute thinking to myself what do I do who do I tell. I continued to walk home. After walking about another minute my dog (nicest, calmest, quietest dog, rarely and I mean rarely ever barks) stops walking (and this dog loves to walk). She turns around and starts growling. The hair on her back was standing up she was showing her teeth and everything. This scared the crap out of me. I kept pulling the leash and saying Dixie (my dog's name) calm down come on. She then let out a loud vicious bark. Then I heard the sound of something speed walking towards us from behind. It sounded like a dogs paws on the pavement. We could not see anything but it was getting louder. My dog suddenly turns around and takes off pulling me. The faster we ran the louder and closer it sounded. I was afraid to turn around to see what was behind me but I did anyway as we ran and saw nothing. I let go of my dogs leash and ran into my backyard and went through my back door into my house. My mom woke up from me running into the house. She asked what was going on because I was out of breath. I tried telling her but she got out of bed and kept accusing me of being on drugs. Then my phone started ringing and it was my friend (I had told him to call me when he got home when we left each other) I pick up the phone and started to cry as I tried to tell him what happened. Before I'd get to the substantial information, the phone would disconnect. My house has full coverage... I didn't want to call him back because he was using his house phone and I didn't want to wake everyone at his house up. I went back to my moms room to continue to try to tell her what happened. She started to believe me and was getting freaked out herself. My phone started ringing in my room so I went to go answer it knowing it was my friend. As I'd try telling him again, the phone would disconnect. He called me back right away and my mom was screaming for me to come into her room so she can try to make sense of things. I tell my friend to hold on, I left the phone in my room. As I was trying to tell my mom what happened more in depth, my cell phone started ringing (disconnected while I was talking to my mom and my friend was calling me back) I lost it. I broke down and told my mom every time I tried telling my friend what happened my phone disconnected. She didn't understand. This happened over and over again and I was eventually able to tell him quickly what happened. He was afraid because he said he was hearing humming outside. He went to sleep in his parents room. We were 15 at the time... I counted how many times my friend called me. He called me 17 times within a half hour period. That means that my phone disconnected 16 times in that half hour period. Again, at my house I have full AT&T 3G service. I then stood outside my moms and my room and stared down the hallway for a good half hour as if i was hypnotized, not saying it was from "aliens" that's just how scared I was, I didn't want to move. My dog, sat and stared out the back door all night. My mom was just as scared as I was after knowing the whole story and hearing my phone ringing over and over again knowing that I wasn't hanging up the calls, they were disconnecting. My mom was so scared that she made me sleep with my door open, lights and TV on, and she made me take my necklace off in fear that it could be used to choke me. This whole story sounds far fetched I know and my being 15 at the time probably makes this sound silly but I didn't even really believe in Aliens at that time. After that incident I've become somewhat obsessed with Aliens and UFO's. When I tell friends this story they look at me as if I'm legitimately mental. I don't care what people think when I tell them this story. I know what happened and I take it to my grave.

DID I SEE A FAIRY?
Email received: Hi...I'm hoping that I can get some answers by writing you. I have forwarded my experience to MUFON and other investigators but I have never been taken seriously.

In April 2008 an hour or so after midnight, myself and a companion were driving back home after some shopping. We were heading west on Davidson Road in Burton, MI. As we drove passed a Chase Bank we noticed something strange flying in front of car. The 'creature' appeared to be flying 3 feet or so above the ground heading south. My companion was driving the vehicle. She turned her head and noticed a flying creature appear in her right peripheral vision. She quickly looked at the creature as it flew in the direction of the Chase Bank before disappearing. She didn’t recognize any distinct features on the creature. For a second though, she did notice a 5 inch furry brown colored body which then turned into a small shape.

The creature was flying horizontally before nose diving towards the ground then reaching the other side of the road. I suddenly disappeared. I was sitting in the passenger seat and looking straight ahead when I observed the bizarre flying creature or object. I caught a glimpse of what appeared to be a cigarette butt thrown from a window, but as I followed it with my eyes I noticed it was too big to be a cigarette butt. It had the appearance of a bright orange Christmas tree light or an orange globe. The creature moved perfectly horizontally slightly rising by the time it reached the middle of the road. When it turned and reached the other side of the road it was gone. I am speculating that this was a 'fairly' type creature. We both got a very good look at it. Any idea what this was?
Lon Strickler at 4:21 PM
Share
‹
›
Home
View web version